I acquired some 15mm models from Battle Valor Games some time ago and they have sat quietly on a shelf waiting for me to give them some attention.

I decided to pull a few out and see what I could do with them.  Battle Valor Games has a pretty large selection of factions and there is currently a Kickstarter project to expand some existing lines and create a few new ones.

I have a fair number of their Frigian line.  These are kind of Viking-esk.  They look pretty decent and each pack has a good variety of poses.  I'm not entirely sure which rules I will be using these with, but I'm sure they will find their way to a battlefield for a game or two at some point.

As is my usual practice, I've gone with a very simple paint job on these models. 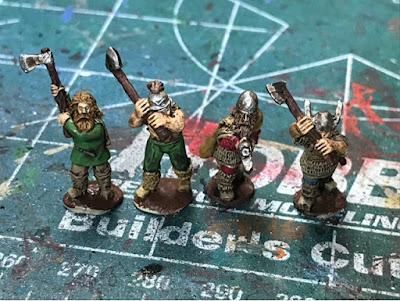 I primed these with a flat tan and then picked out a few pieces of cloth with red, blue, and green.  Next, I painted weapons and shields.  Finally, I applied a brown wash over the entire model.

With the models painted, I based the infantry on 40mm x 20mm bases and the cavalry on 40mm x 30mm bases.  I mixed up some drywall spackle with some glue and a bit of brown paint and applied that to the bases.  Next, I painted the bases with dark brown.  I still need to add some flock to the bases, but thought I would share the progress so far. 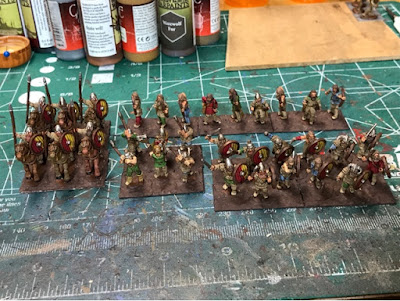 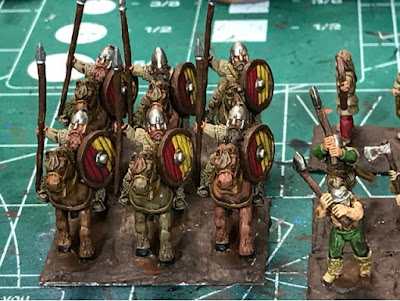 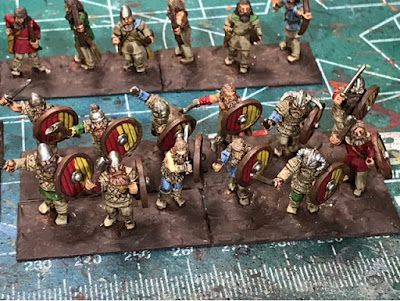 I'm pleased with the models and how they turned out.  I'm thinking I might use these models to build a halfling army for Kings of War.
Posted by sean gewecke at 12:19 PM No comments:

I thought I would try something a little different for another game of Kings of War for my 6 x 6 Game Challenge.  For this game, I pulled out some of my Epic 40K models and put together a couple of armies; Kingdoms of Men (Space Marines) and Orcs (Orcs).

I scaled down the normal table size to a 3' x 2' table and worked up some 800 point armies.  I didn't spend a lot of time on building the armies as I was just checking to see how the game would work in this scale.

Kings of War is pretty abstract so I thought this might let me make use of my collection of Epic 40K models. 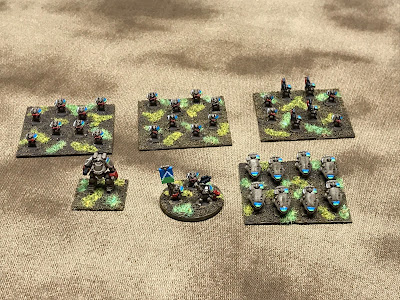 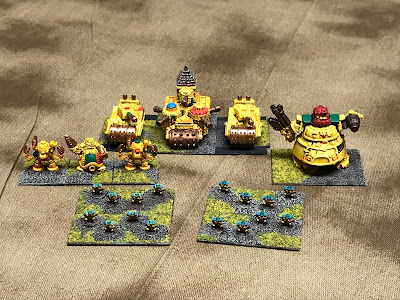 The Kingdoms of Men got lucky early and routed the Fight Wagon Regiment after doing some damage via shooting.  Once the orcs reached melee range, things started to go down hill for the Kingdom of Men.  Though in the end, the Orcs couldn't do enough damage and the Kingdom ended up winning the battle.

It was a fun game and fits well on a small board.  I think I will be playing more games in this scale with my Epic 40k models.  I have several factions and will be able to try out a variety of lists .

There isn't any hidden info in KoW so it works well as a solo game.
Posted by sean gewecke at 10:50 AM No comments:

I thought it would be a good idea to show the basic mechanics of Imperial Skies by Rottenlead Publishing.  I put together a couple of small fleets and set up my game table.

In this battle a small fleet of German ships have come across a fleet of French ships and a skirmish ensues. 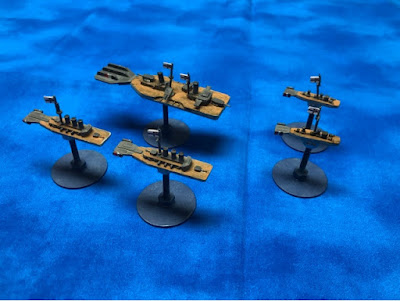 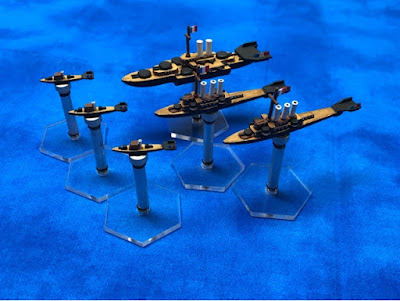 The German's didn't have the best dice in the game and came out a little short because of that.  I had a good time playing the game and since there isn't any hidden information, the game worked well as a solo experience.  I will likely be playing more solo games in the future.


I didn't play until all the ships were dead as I thought it made more sense for Germans to break off once the battle had turned against them. 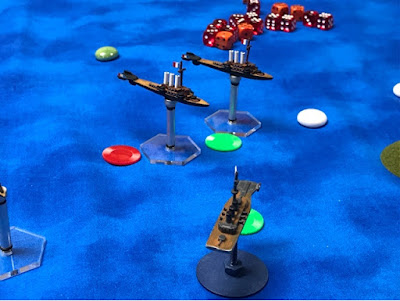 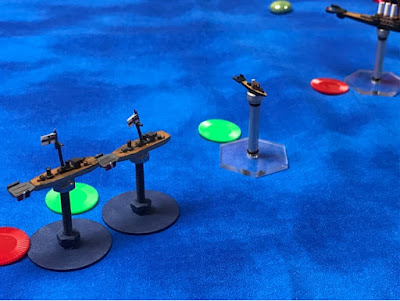 Maybe next time, the Germans will have a better showing as they have not done well in the last 2 games.


Posted by sean gewecke at 1:49 PM No comments:

I took some models and the rules for Imperial Skies to the Recruits Gaming Convention in Lee Summit, MO.

I put together a scenario and ran it for some of the attendees at the convention and am counting this as my first game of Imperial Skies for my 6 x 6 Game Challenge.


The Allied Powers received intelligence that the Central Powers had developed a chemical weapon and were transporting it to the front lines.  The Allied Powers dispatched an available French force to intercept the convoy.

The French forces could not simply shoot down the merchants carrying the chemical weapons because they were afraid that the wind would carry the weapons onto the nearby coast and kill many civilian lives.

The Central Powers considered the weapon to valuable to destroy so would fight to maintain control of them and would attempt to retake the ships if they were boarded.

The game started out well for the Central Powers, but the dice turned on them and they had pretty poor rolls throughout most of the game.

The end results showed all but two of the Central Powers ships being shot down while the French only lost 7 ships and most were the patrol boats, not the cruisers. 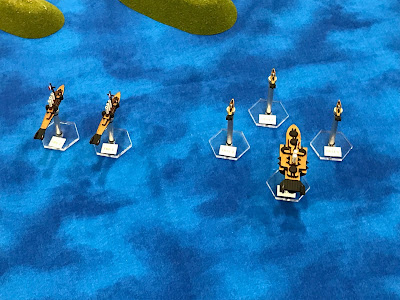 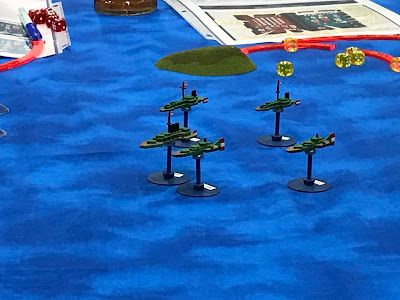 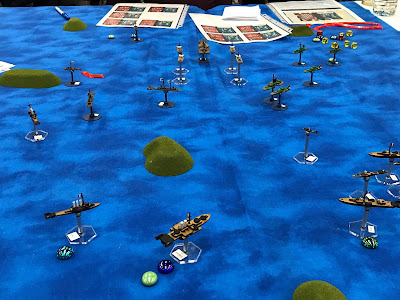 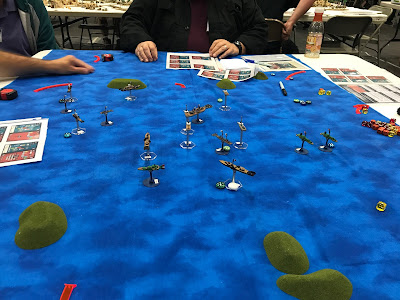 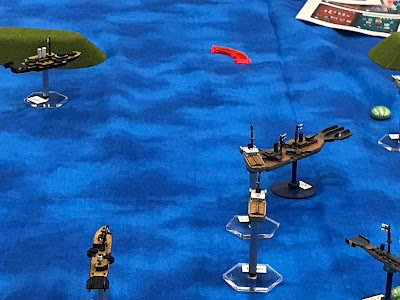 The rules worked well, even with several new players that had never seen them before.  It was a fun game, and I look forward to more games in the future.

Posted by sean gewecke at 7:46 PM No comments:

I found a very inexpensive copy of AVP: The Hunt Begins at a convention recently.  My buddy Bill and I went in together on the game.  I have not had a chance to play it yet, but I did get a chance to start painting some of the models.

First up on the paint table are the juvenile aliens.  I went with a simple paint job and like the results. 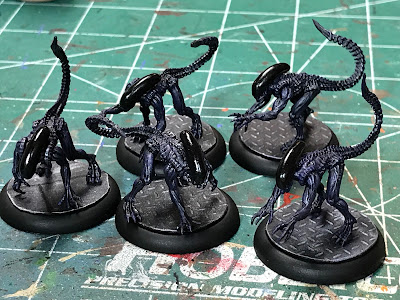 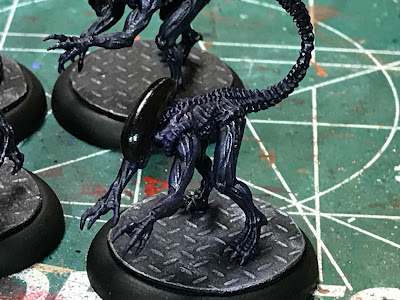 Next up will be the adult aliens.  I'm going to be using a different color pallet for them so they are easy to distinguish on the table.
Posted by sean gewecke at 4:05 PM No comments:

Next up for my French Fleet was a couple of Formidable Class Light  Cruisers.


These ships turned out well.  I like the way they look and I might need to get a couple more to add to the fleet once I get the rest of them painted. 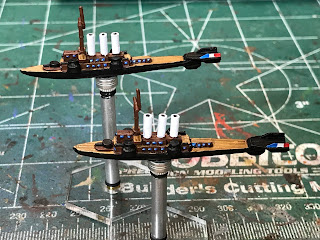 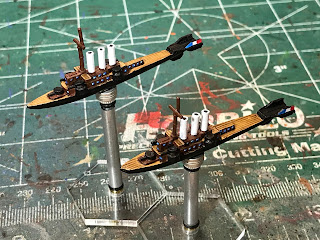 Stay tuned to see which ship gets painted next.
Posted by sean gewecke at 7:33 PM No comments:

I was hoping to play 4 games in August, but I only managed to play 3.  Not bad and at least I didn't fall further behind on my goal.

I played my first game of Imperial Skies and Conflict of Heroes as well as a game of Cold War Commander.

Completing the challenge is still realistic.  I'll need to play more than 3 games each month to succeed though.


The Walking Dead: All Out War

Posted by sean gewecke at 3:23 PM No comments: