I have played a few games of In Her Majesty's Name and enjoyed it.  Then I heard about In the Emperor's Name.  It is pretty much the same game (with a few tweeks) just themed for the Warhammer 40K universe.  I like the fluff of 40K, but the rules don't interest me anymore.

However, their models are very impressive, if a bit pricey.  I already have lots of stuff that would work and even if they are pricey, this game is based around an army of 5-10 models so you can get what you need for a pretty reasonable amount if you don't have something in the cabinet that will already work.

The rules for In the Emperor's Name are a free download.  Can't beat that.  Their layout leaves a little to be desired, IMHO, but since they are free I can forgive that.  I think a quick start sheet and/or summary sheet would be a useful addition.  I might put one together myself if my friends start playing this with me on a regular basis.

For our first game, we didn't play a scenario.  Just a straight up fight to the death.  Ultimately, I'm most interested in using this system for scenario based games that may or may not include balanced forces, but to learn the rules a basic fight works.

I brought out a Mob of orks.  These brutes have been trading with the local Imperial Guard forces.  Basically providing additional weapons to the poorly supplied grunts. 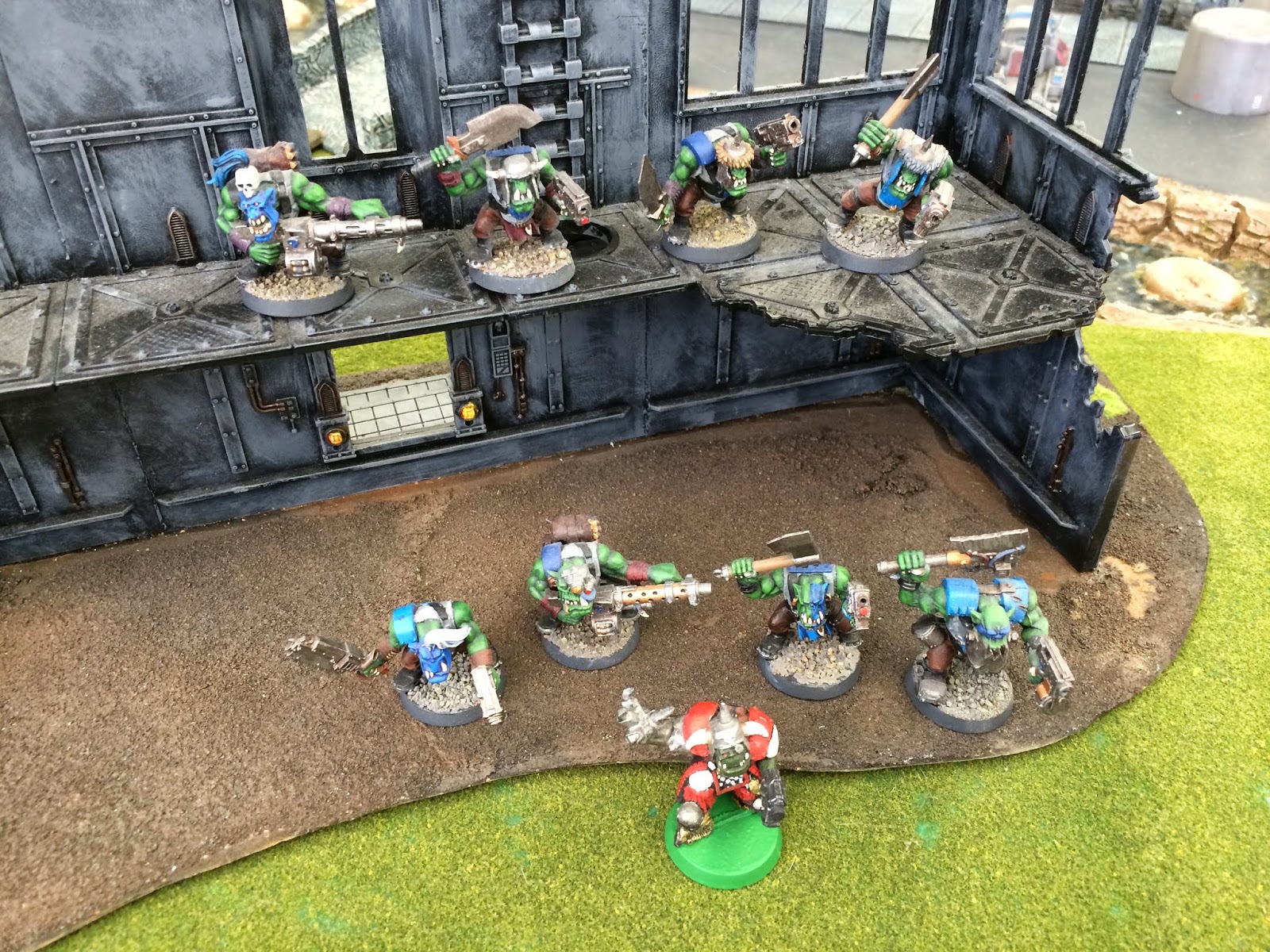 
My opponent for the game was my friend Nathan.  His inquisitor had heard about our orks and was concerned about where our supply of imperial weaponry was coming from.  He brought his retinue out to get some information and ended up in a fire fight with the orks. 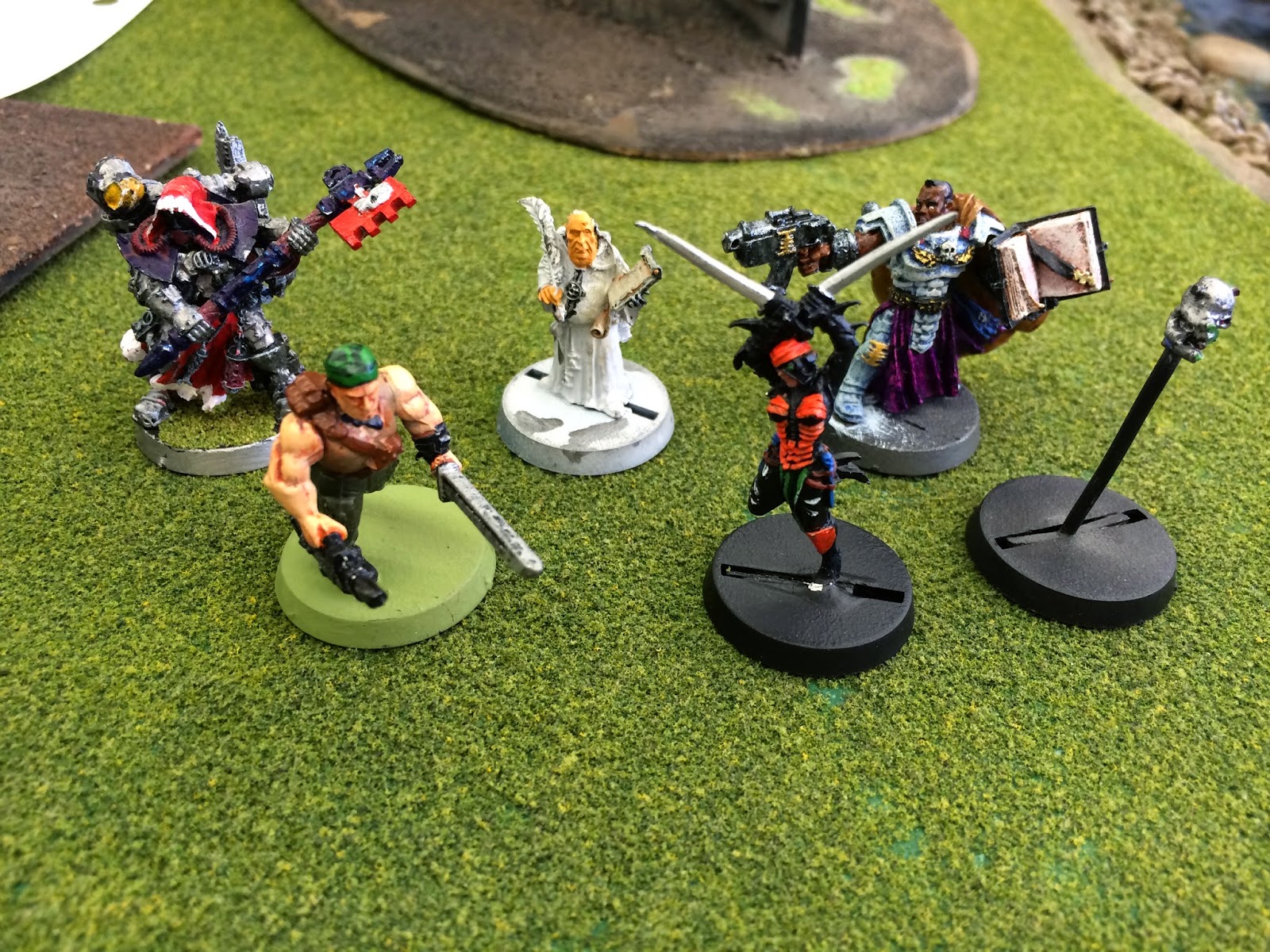 Sorry, but I don't have the specifics of his force.  Here is my description based upon my memory of the game.  (This is probably way off.)

Our battle took place on the outskirts of a battle worn city.  The buildings have been raveged by artillery and most of them are in ruins.  This is a great place for my orks to conduct their business, and also a great place for the Inquisition to interrogate us. 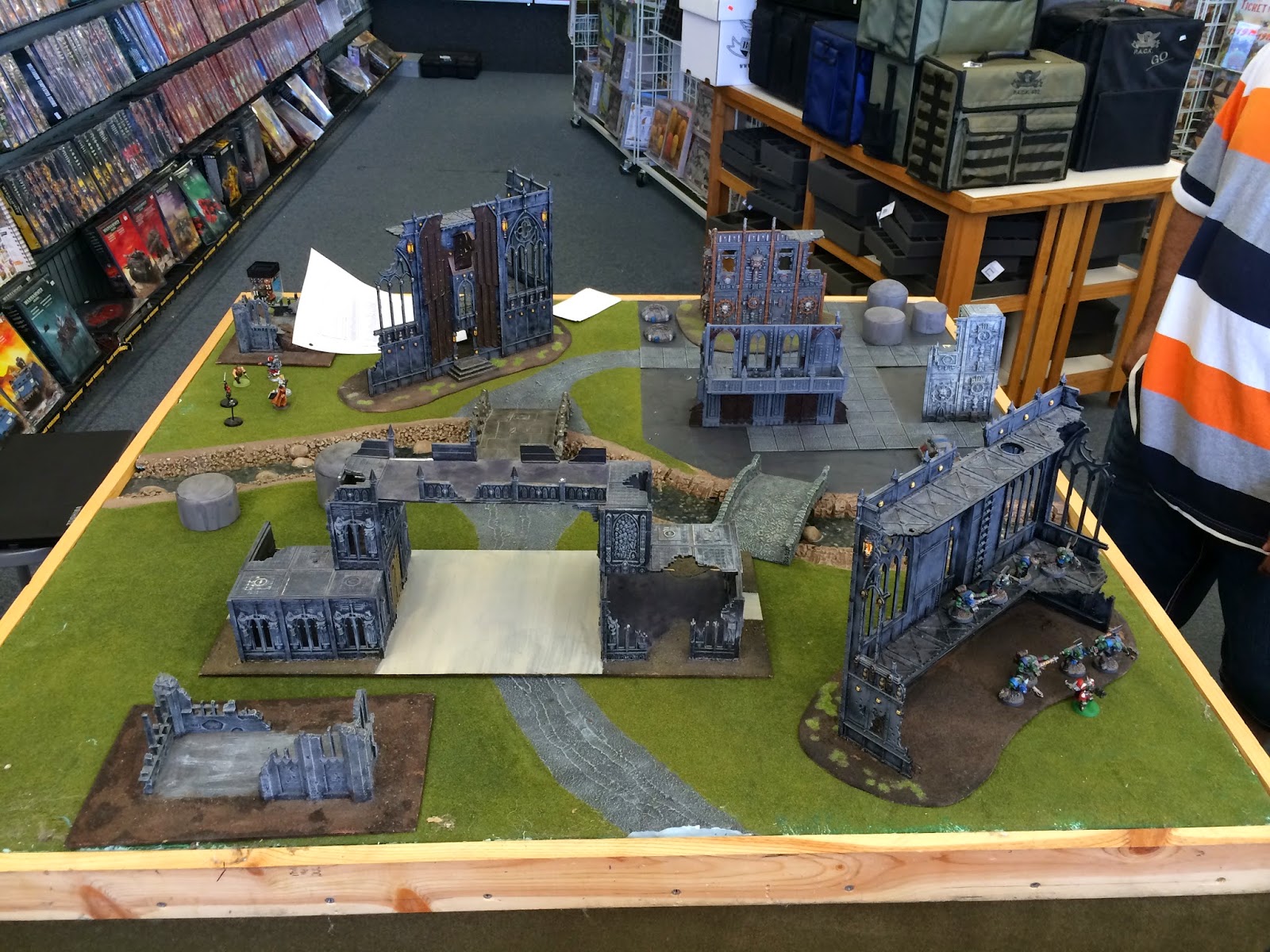 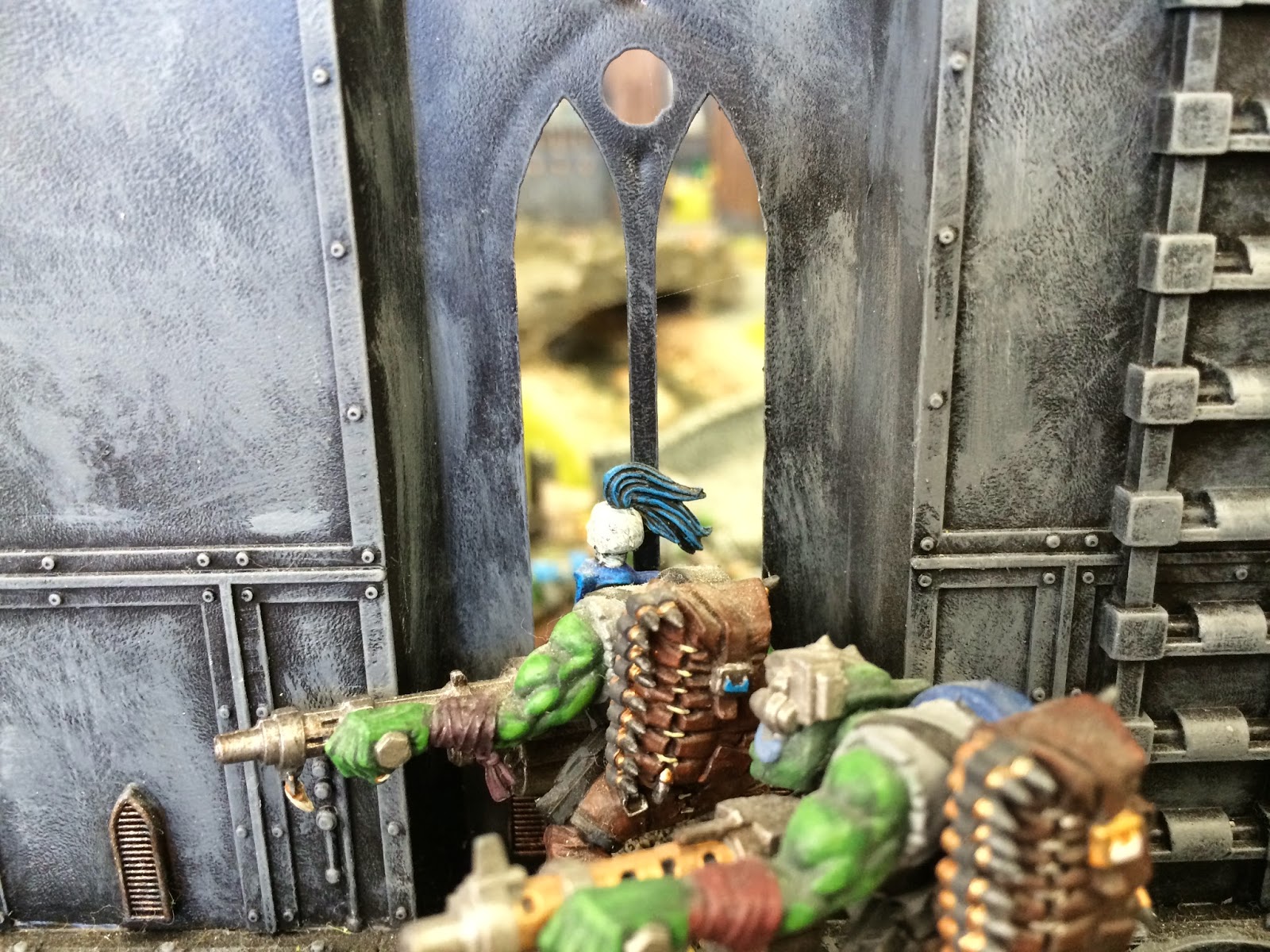 My orks set up with most of the boyz joining the Boss and Nob ready to rush across the board and engage with the hummies.  The two boyz with big shootas took up position in a building with a good view so they could rain down fire on the enemy.

In the first turn I got a lucky shot off on the enemy's inquisitor and hit with a 6.  He failed his grit with a 1 and suddenly their leader was dead. 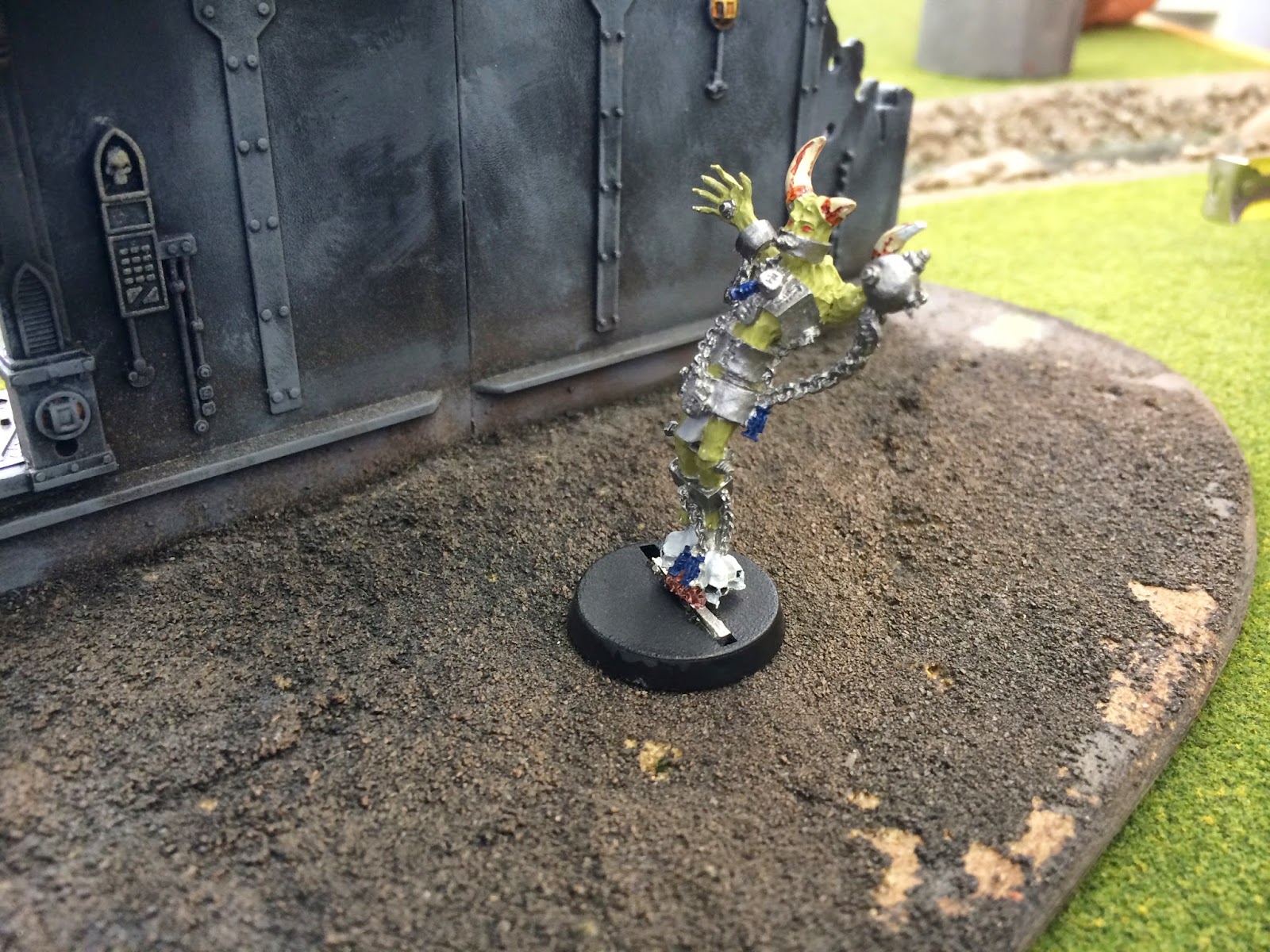 The inquisitor psychic promptly failed his test to use a power and then after more bad rolls was turned into a demon under my control.  Bad for the inquisition.  Thus is the danger of the warp.

Not a great start for them.  Really it was a hole that they wouldn't be able to dig themselves out of, but not wanting to fail the Emperor, the rest of the unit advanced hoping to achieve their objective and hope the Inquisitor would recover from his wounds. 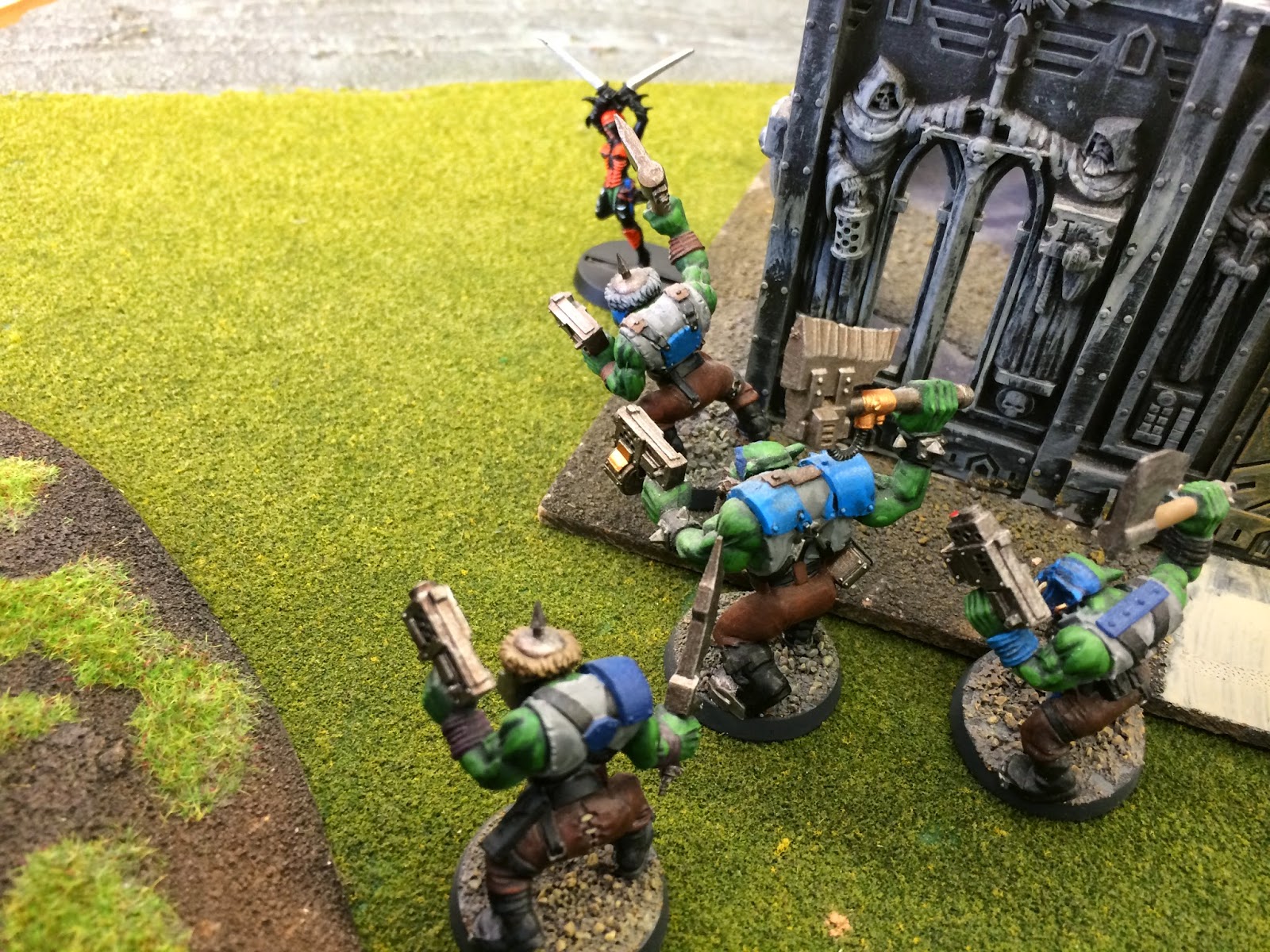 The assassin ran around a building and with its stealth ability avoided my fire while it got up close and personal with my boyz and warboss. 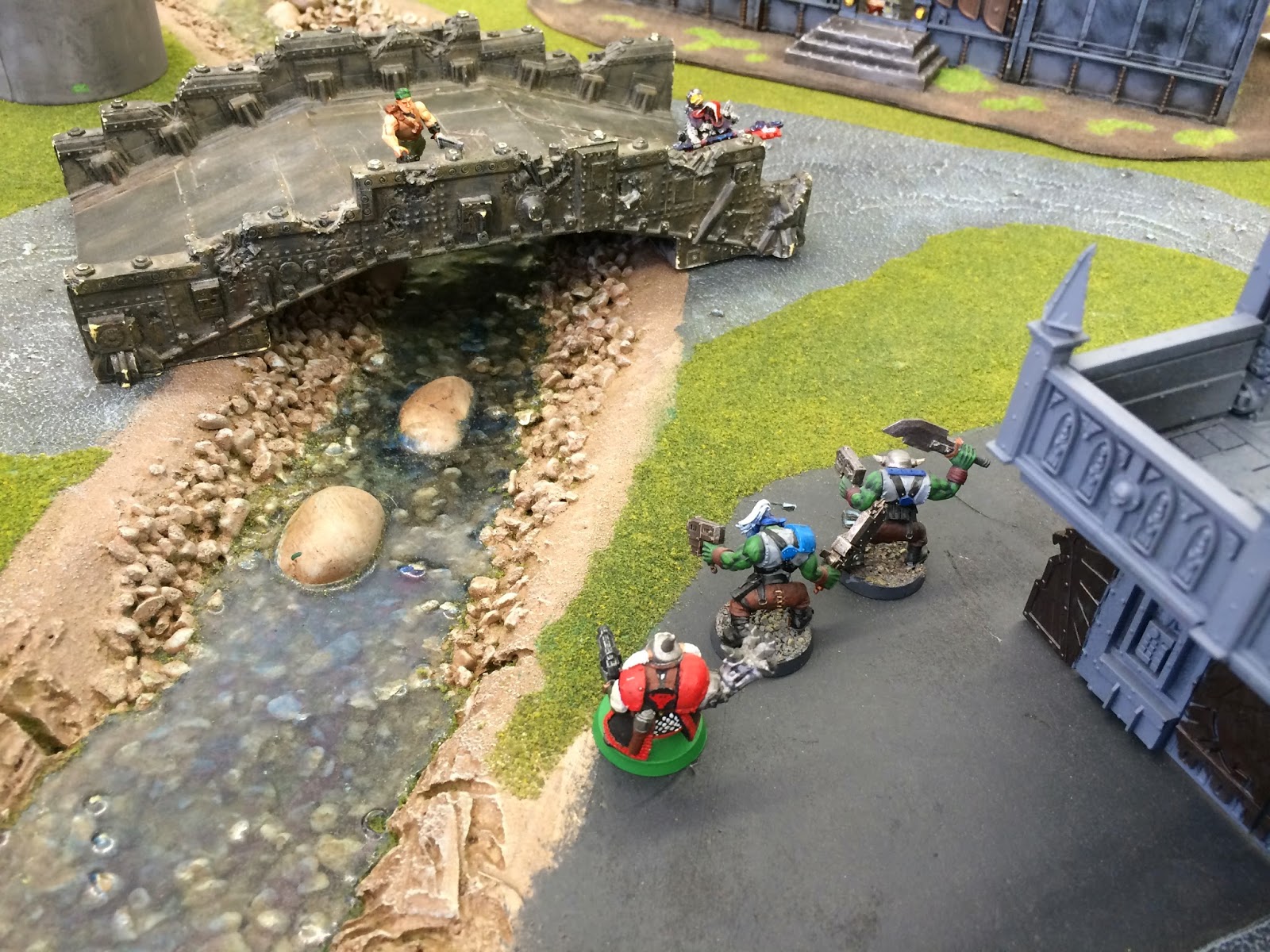 I sent a contingent of boyz forward along the stream to engage the techpriest and Sergeant.  The real stinker was that sergeant.  He was here just last week buying up half of my supply.  Now he is here attacking me with my own product. 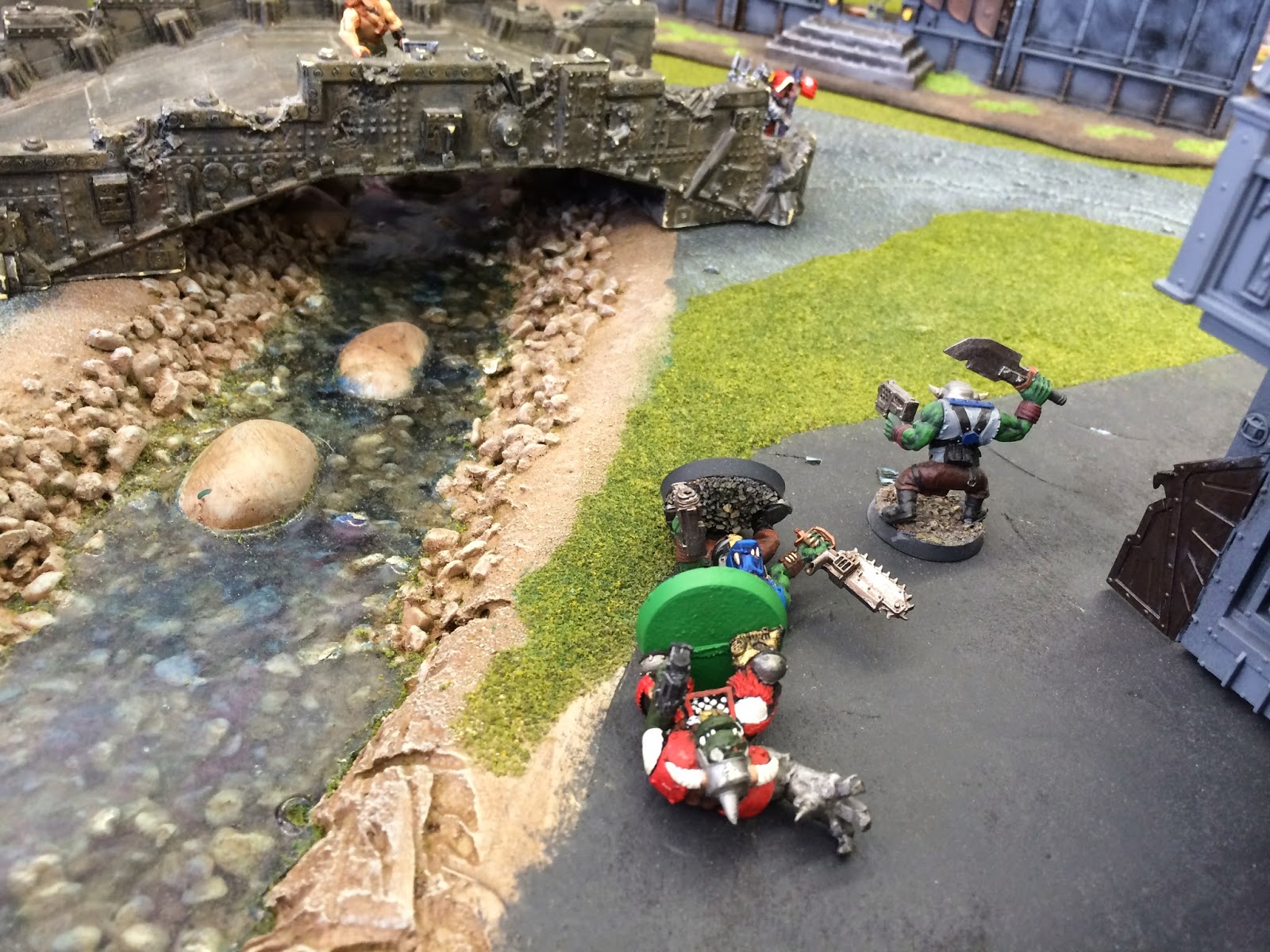 The Techpriest opened up with his flamer and killed a boy and my nob.  Them things are scary. 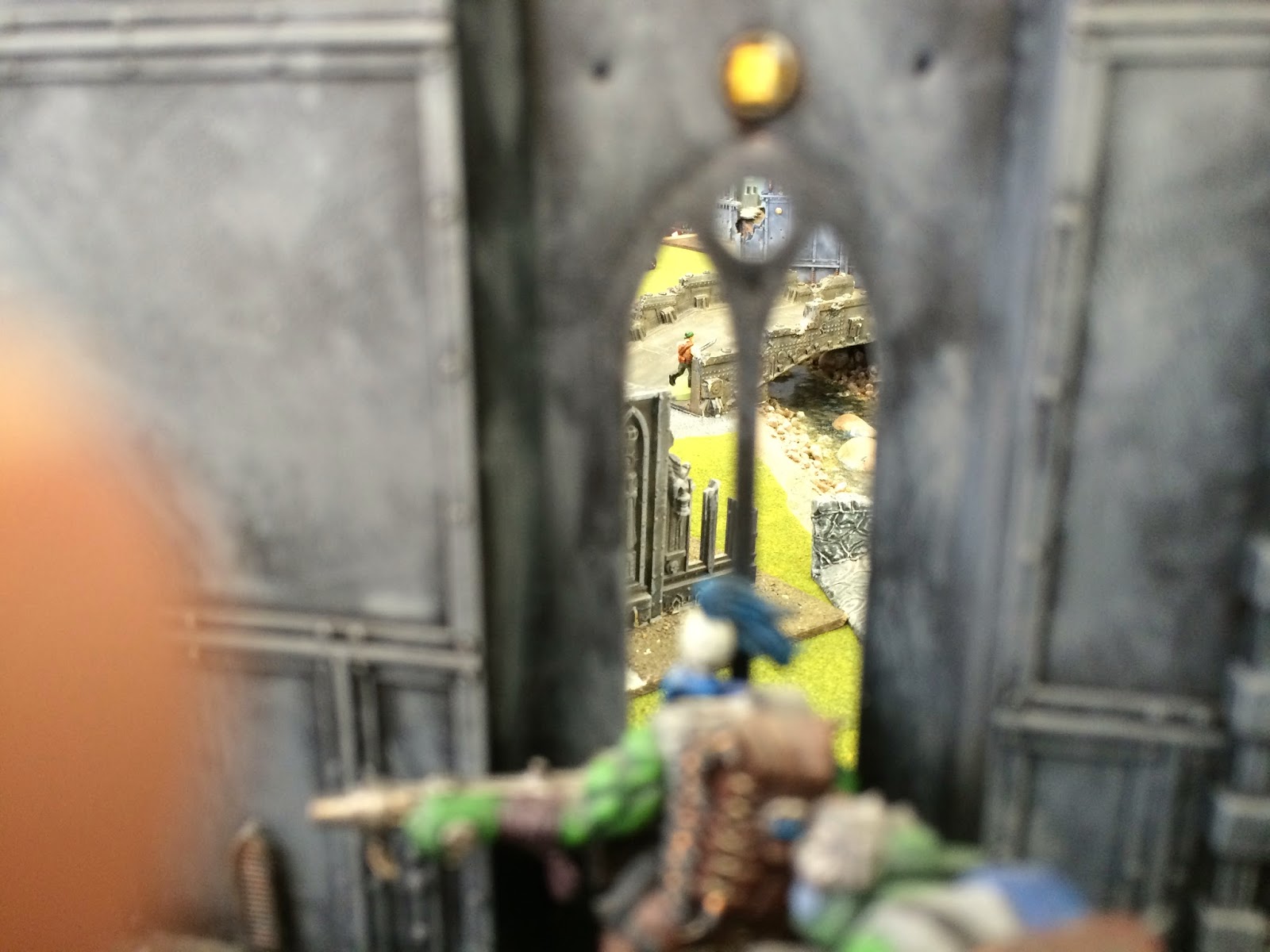 My boyz with their big shootas took some shots at the sergeant on the bridge.  They didn't have much luck hitting him though as he got cover from the bridge railings. 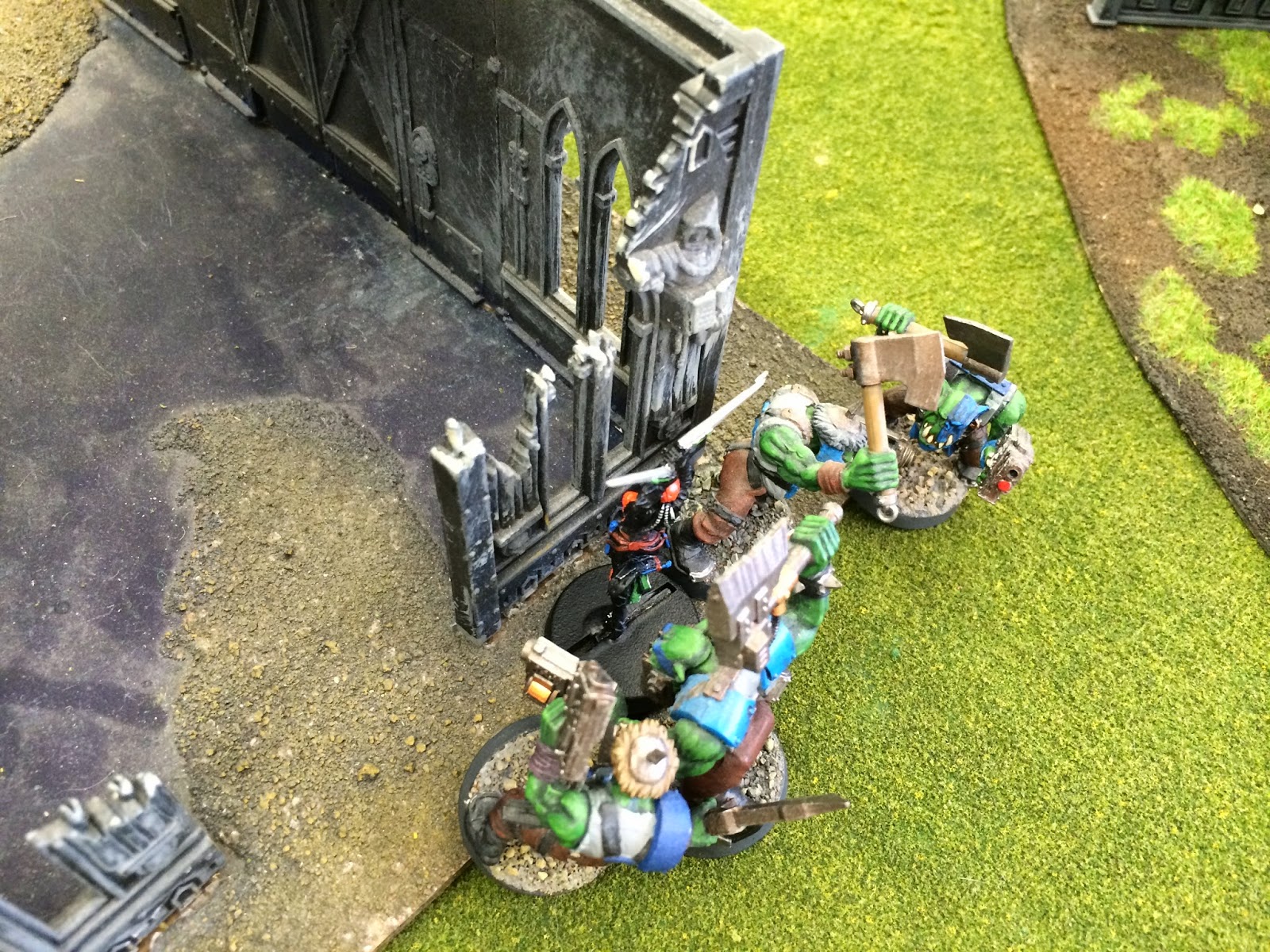 Close combat is much more brutal than shooting with the orks as no modifiers are applied to the target for speed.  This made the assassin a lot easier to hit.  The orks were able to knock the assassin down and then it got up and ran away in its next turn (without any free shots by the orks because of some skill). 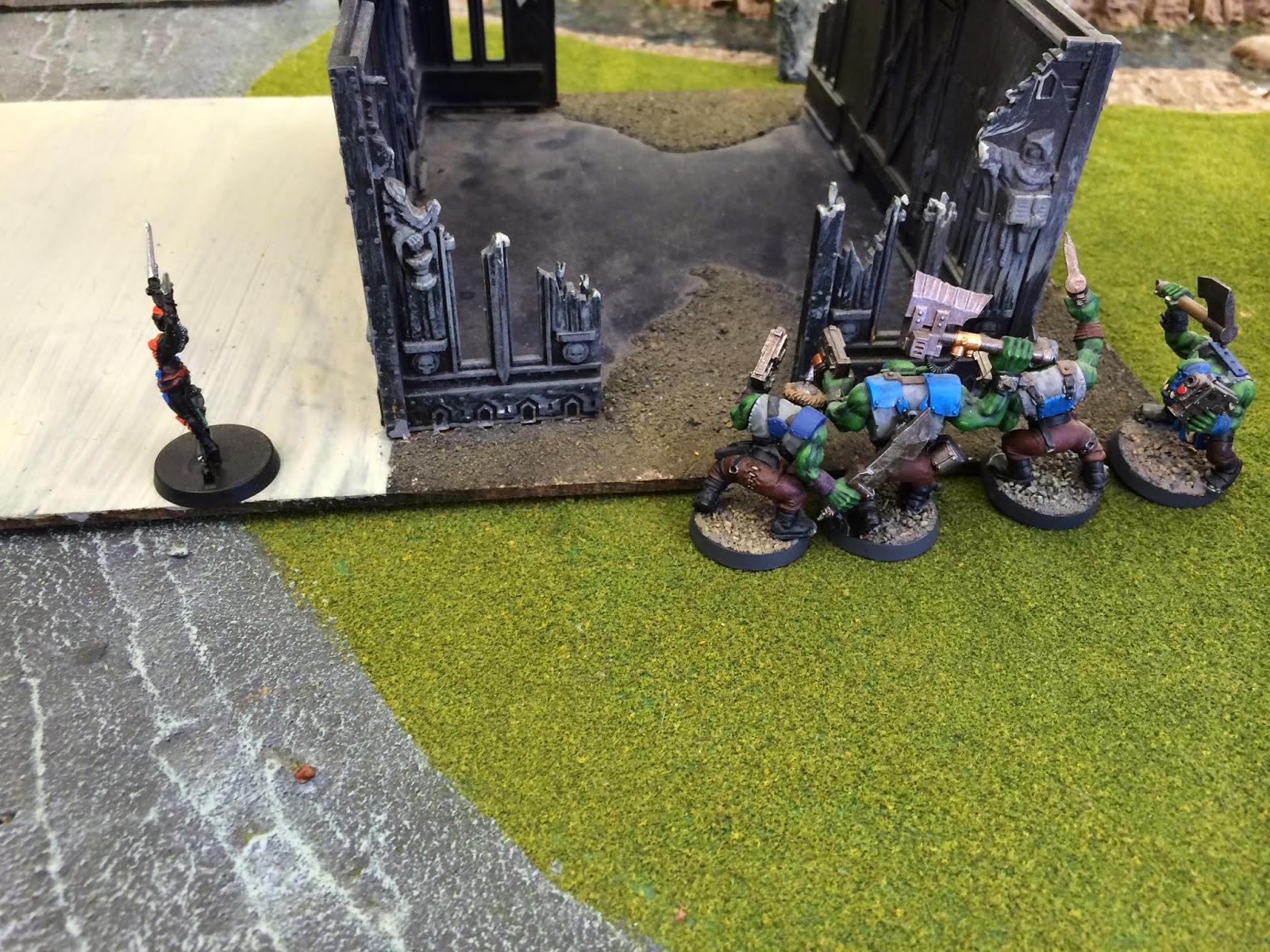 In the end, the orks held their ground and sent that pesky 'Quisitor packing.  I'm sure the lucky shot killing the Inquisitor in the first round and then the psychic turning into a demon on turn two helped a lot.

As a whole, I like this game.  I think I will make a few adjustments, but want to get a few more games in before I change too much.

This will be a fun game that plays pretty quickly.  It will work well for scenarios as well as pick up kind of games if I can get enough guys interested.  It is a good use for all of those 40K models that I have.

Have you played this?  What did you think?

Posted by sean gewecke at 7:48 AM No comments:

I spent most of the day yesterday in Louisville, NE at the Eastern Nebraska Practical Shooter's monthly USPSA match.  It was a great day for shooting.  I didn't do all that well, but still had a good time.


I did play around a little with setting a camera on a tri-pod down range so there is a little extra footage of the stages there.

I had a few hiccups and there are a couple of times that I guess I forgot I was shooting production division and didn't reload when I needed to.  Stage 4 was my worst stage.  I just couldn't hit the steel.

We started the practical shooting league at Big Shots Indoor Range again last night.  Matches will be held each Wednesday evening with set-up at 7:00 pm and shooting starting around 7:30 pm.


The stage had 12 paper targets for a total round count of 24.  The stage description required that you engage at least 1 target from each side of the barricade and then you could either go prone and shoot the 4 targets from there or there was another shooting box at the back corner of the range that you could shoot those targets from if you didn't want (or weren't able) to go prone.

I think it was a good stage, but then I designed it so I am probably biased.  I shot quickly but ended up with 5 mikes.  I apparently need to practice my prone position shooting.

If you get a chance come on out and join us some night.  It is lots of fun and we would love to have you.
Posted by sean gewecke at 6:47 AM No comments:

I am going to be running a game of Alpha Strike at the Recruits Convention in Lee's Summit, MO.  I wanted to have a test run of the scenario before I took it to the convention.

The scenario:  The Haematite Guard of the Free World’s League has made planet fall on a Draconis Combine planet.  The 2nd Sword of Light was dispatched to bolster the planetary defenses, but by the time they arrived on planet, the Guard had decimated the defending forces.


The Director’s most precious niece, Yugi Kurita, was vacationing on the planet and went into hiding when the attacks started.  Now that it looks like the planet will be lost, the 2nd Sword of Light has been given new orders.  They must hold off the attackers and prevent them from reaching the space port so that the young Yugi can be evacuated off world.

Forces:  Both forces included 12 mechs.  The defenders have 25% more points than the attackers.  All mechs were 3025 era, using introductory rules only, with pilot skill of 2.  This is a con game so I want it to play quickly without having to reference lots of rules or answer lots of question about special rules.

Here is the table we played on. 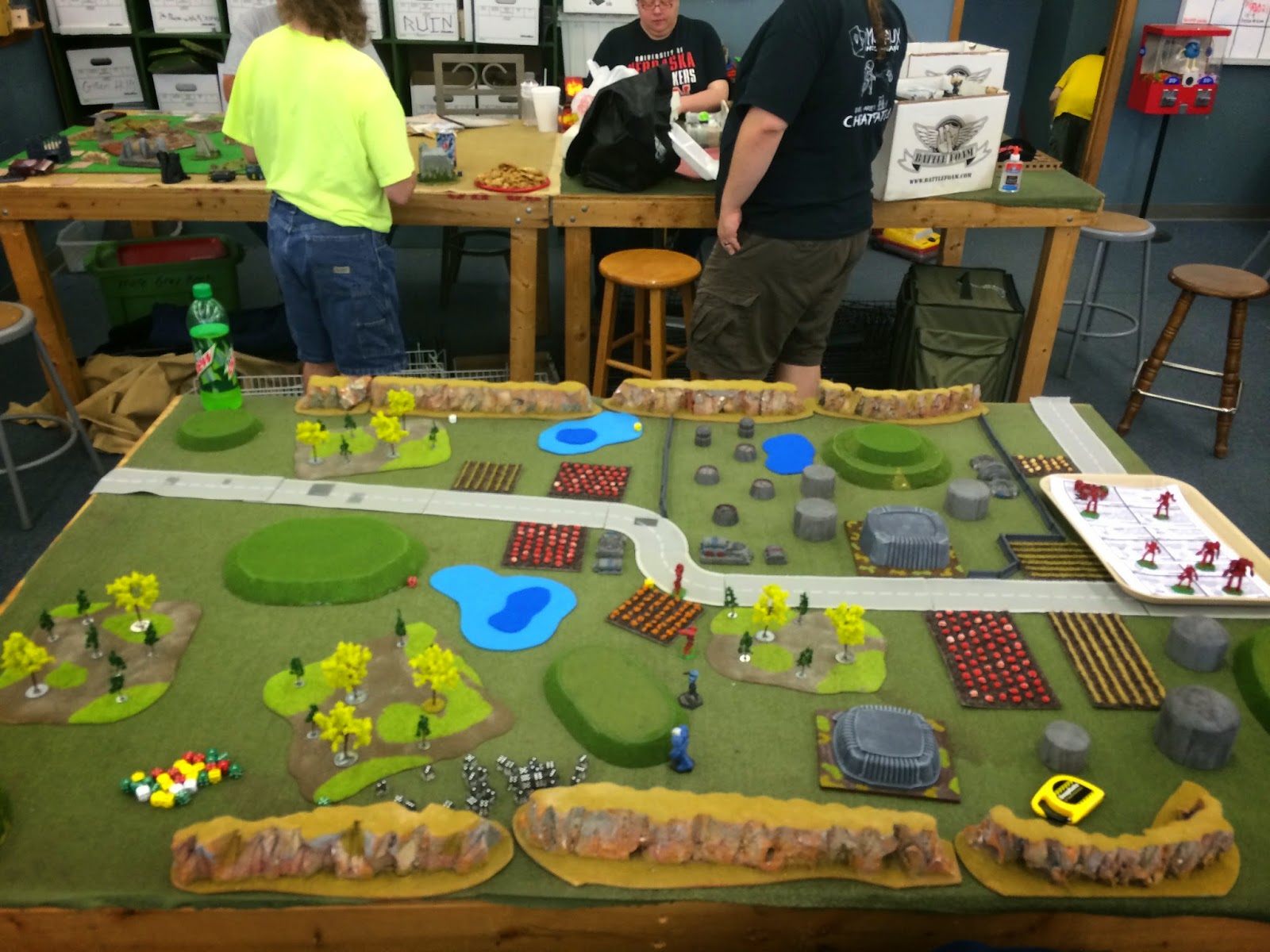 Stardard terrain.  The plowed fields counted as rough.  We played with the attackers coming in on the short edge on the left.  After playing through the game, it was decided that forcing the attackers to go across the length of the table was a bit much.  I have adjusted the scenario and will have the attackers going the other way in the next game.

Deployment:  The defenders set up all their forces within 2" of the center line of the table.  The attacker set up 12" back from the defender deployment zone.

Some pictures from the game. 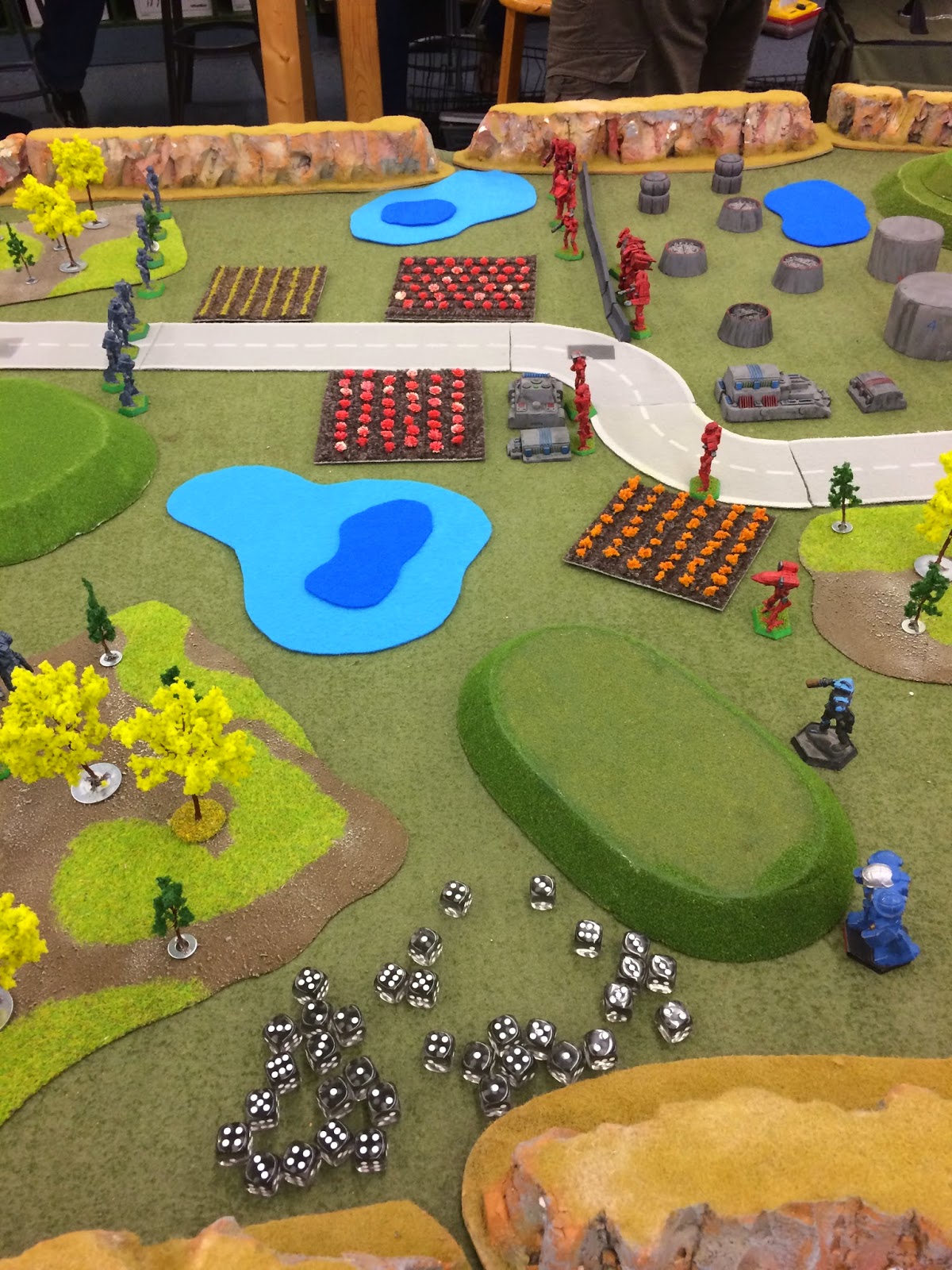 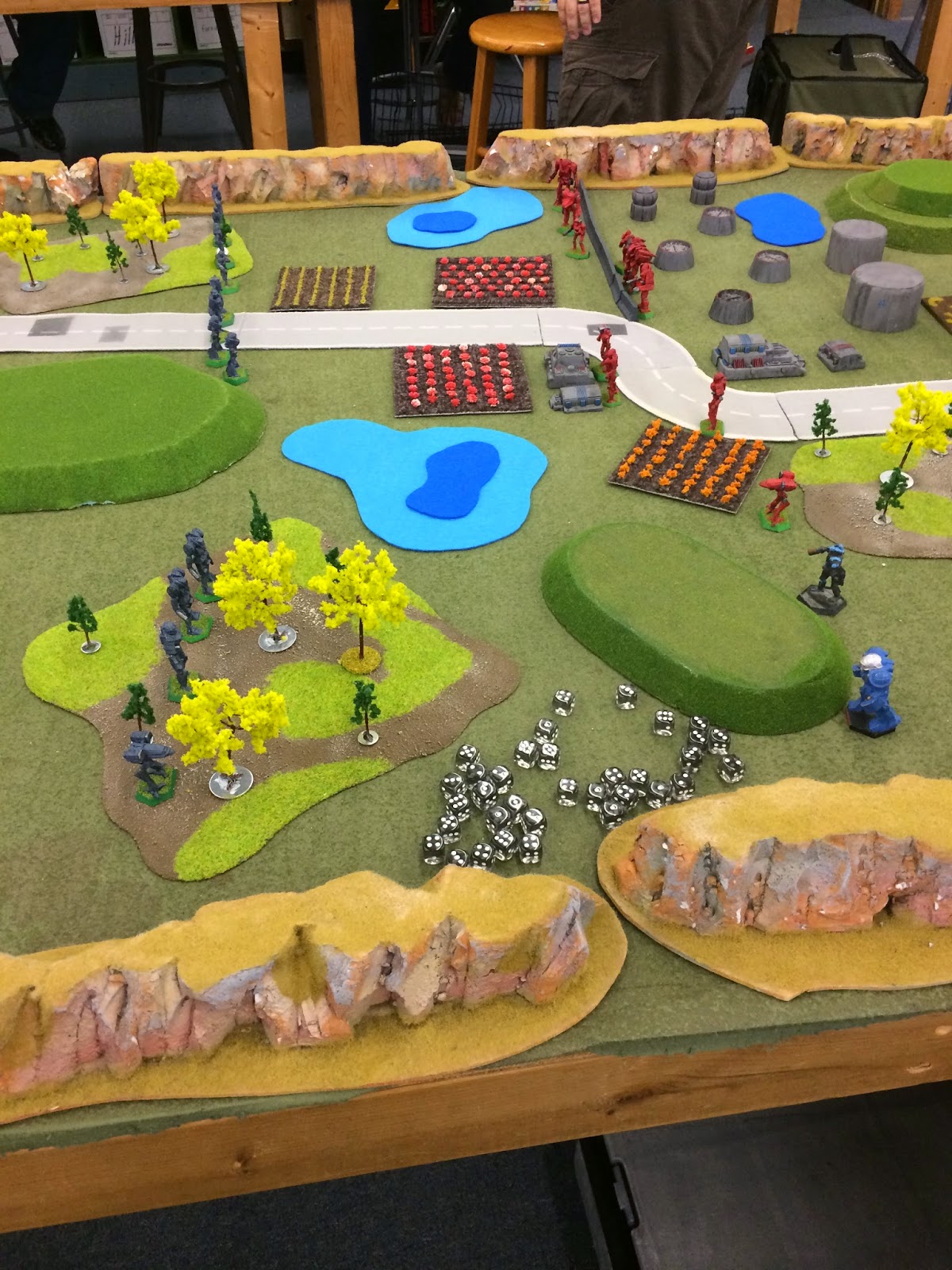 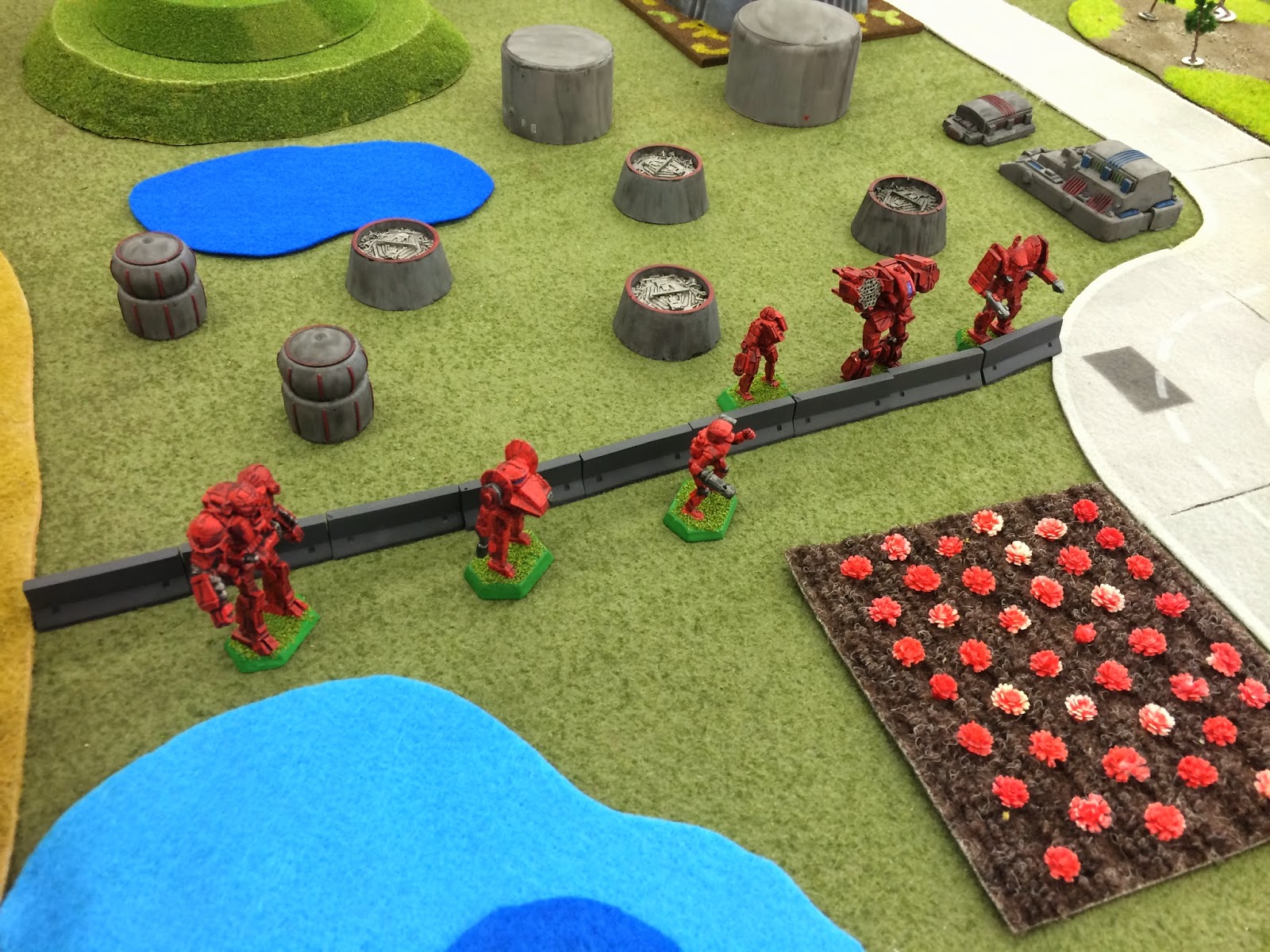 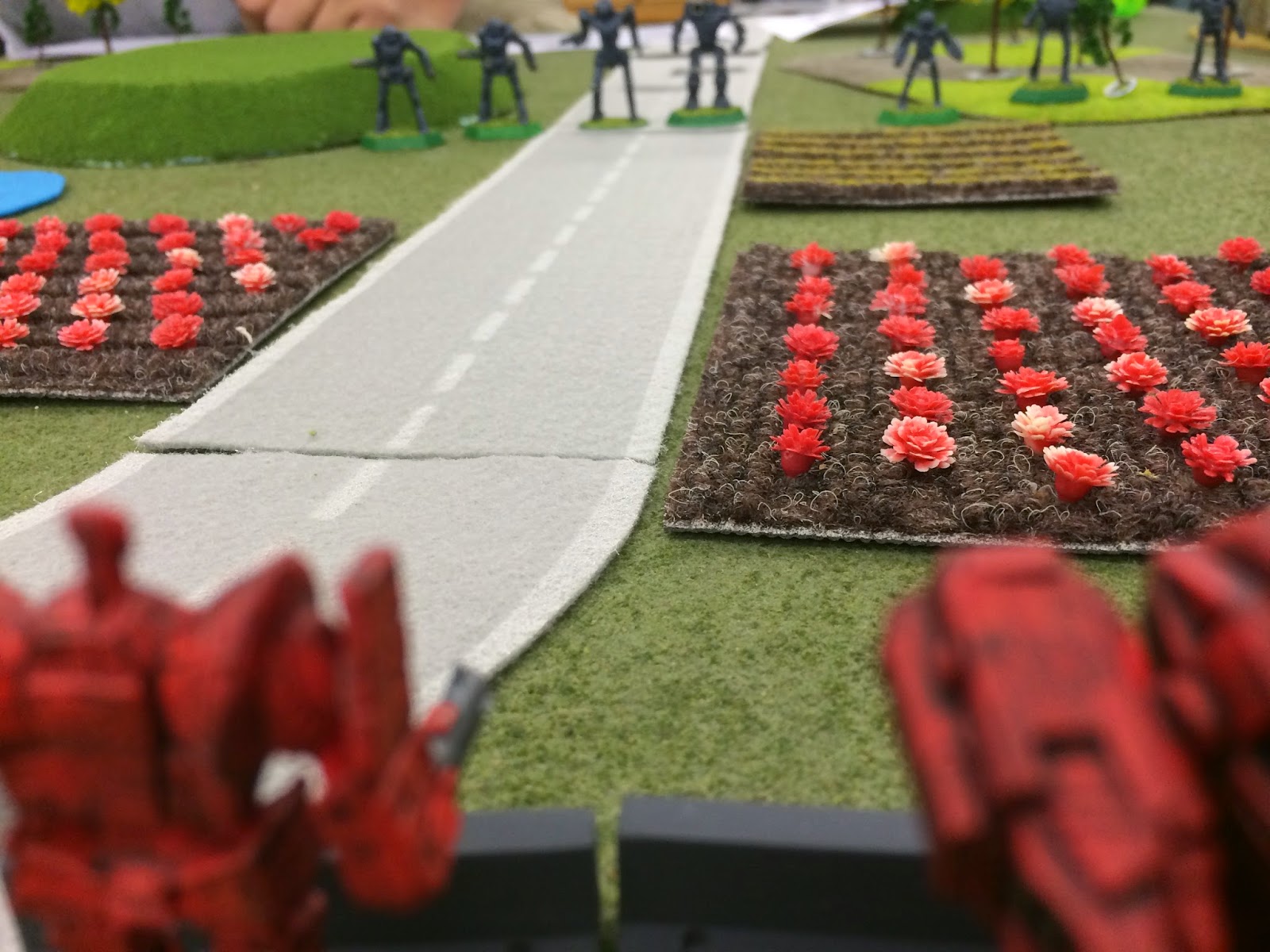 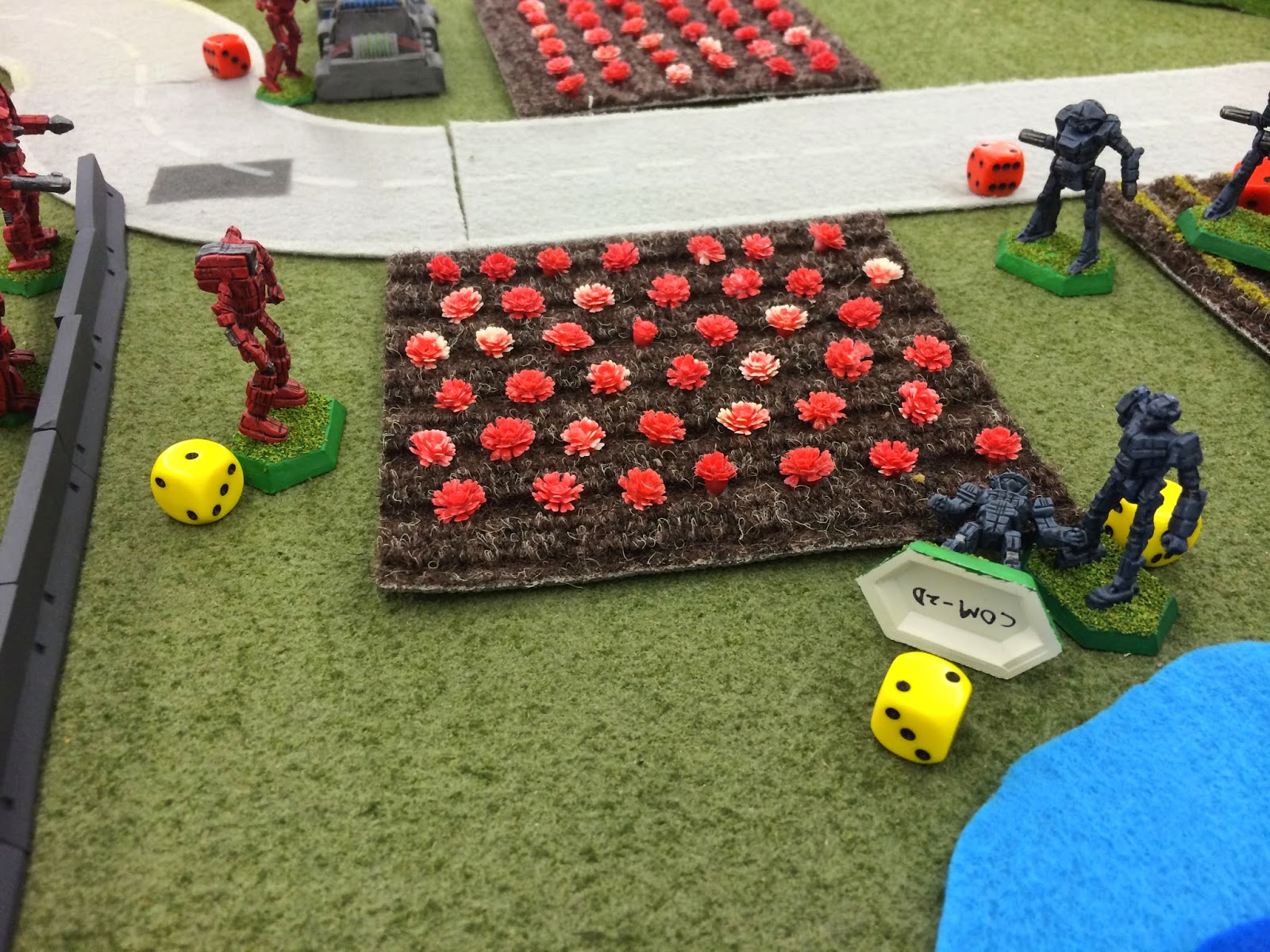 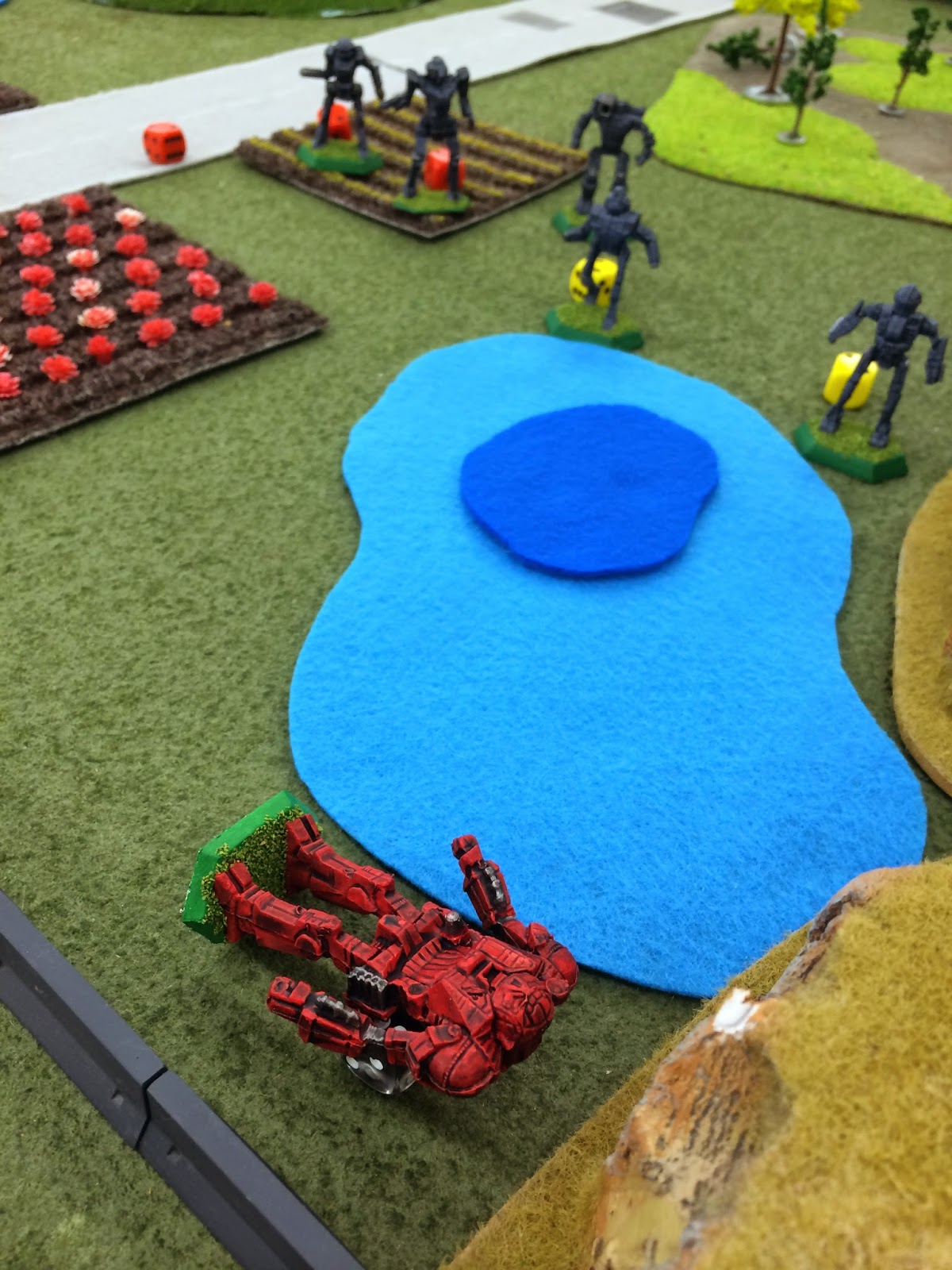 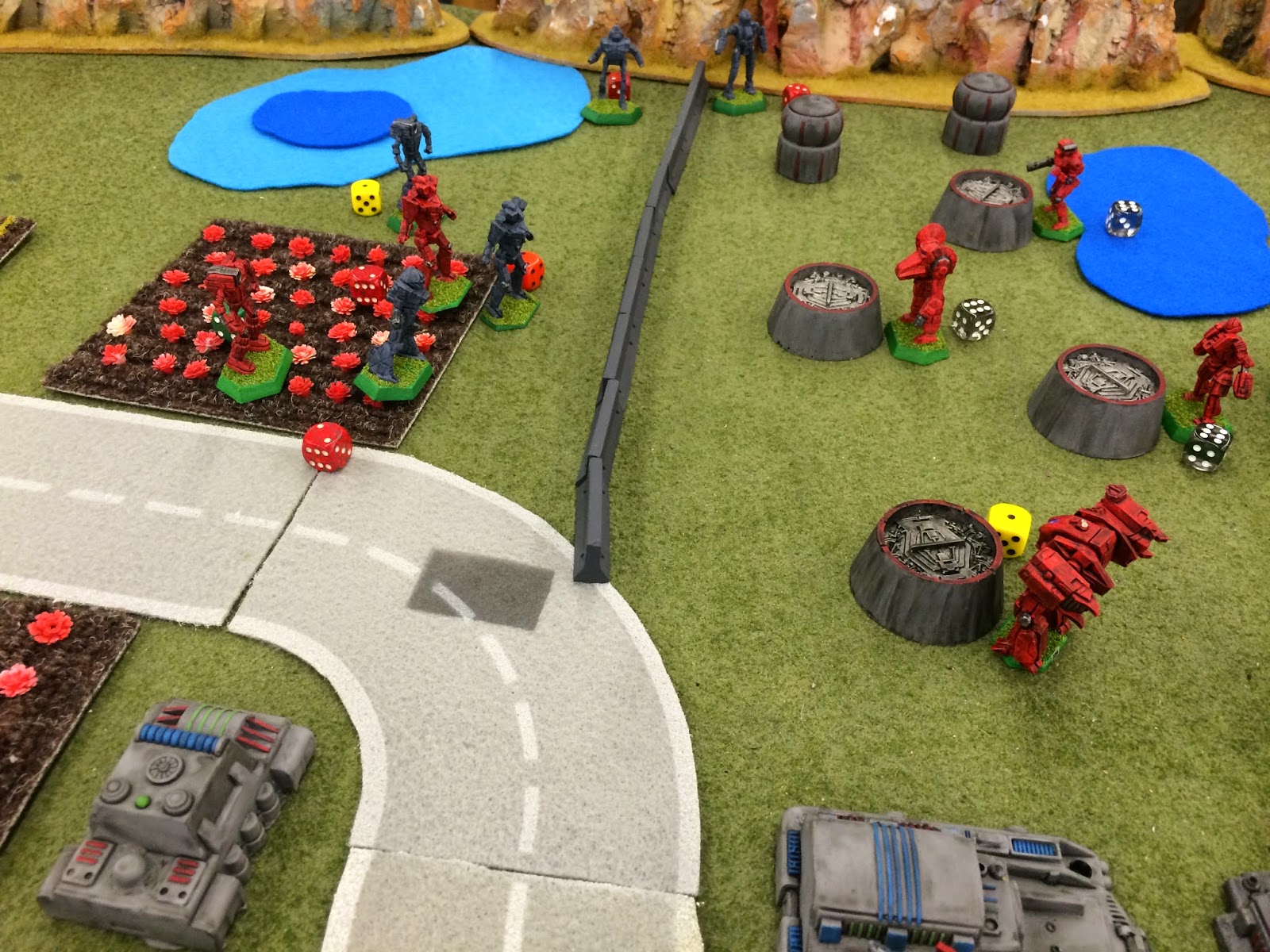 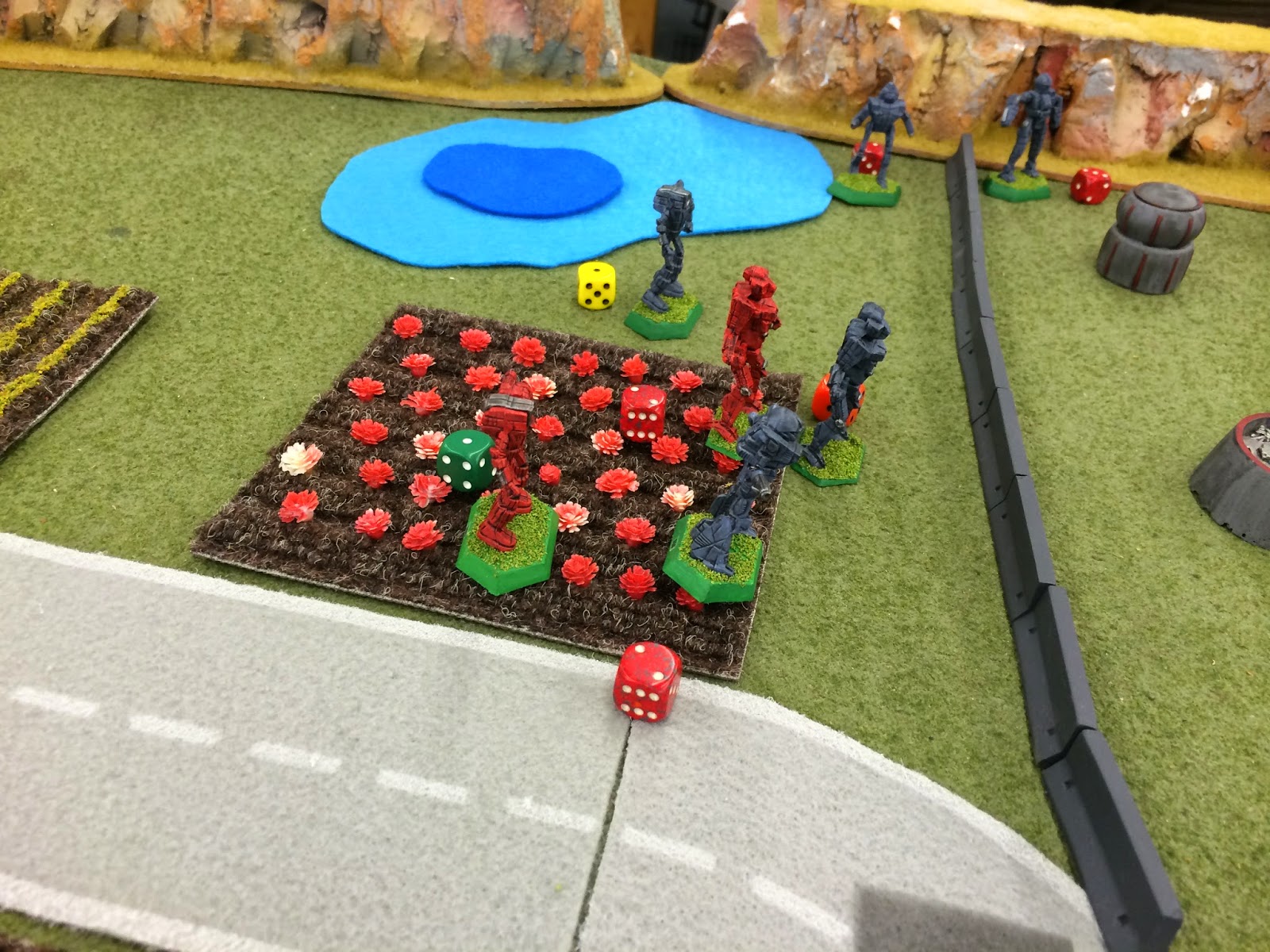 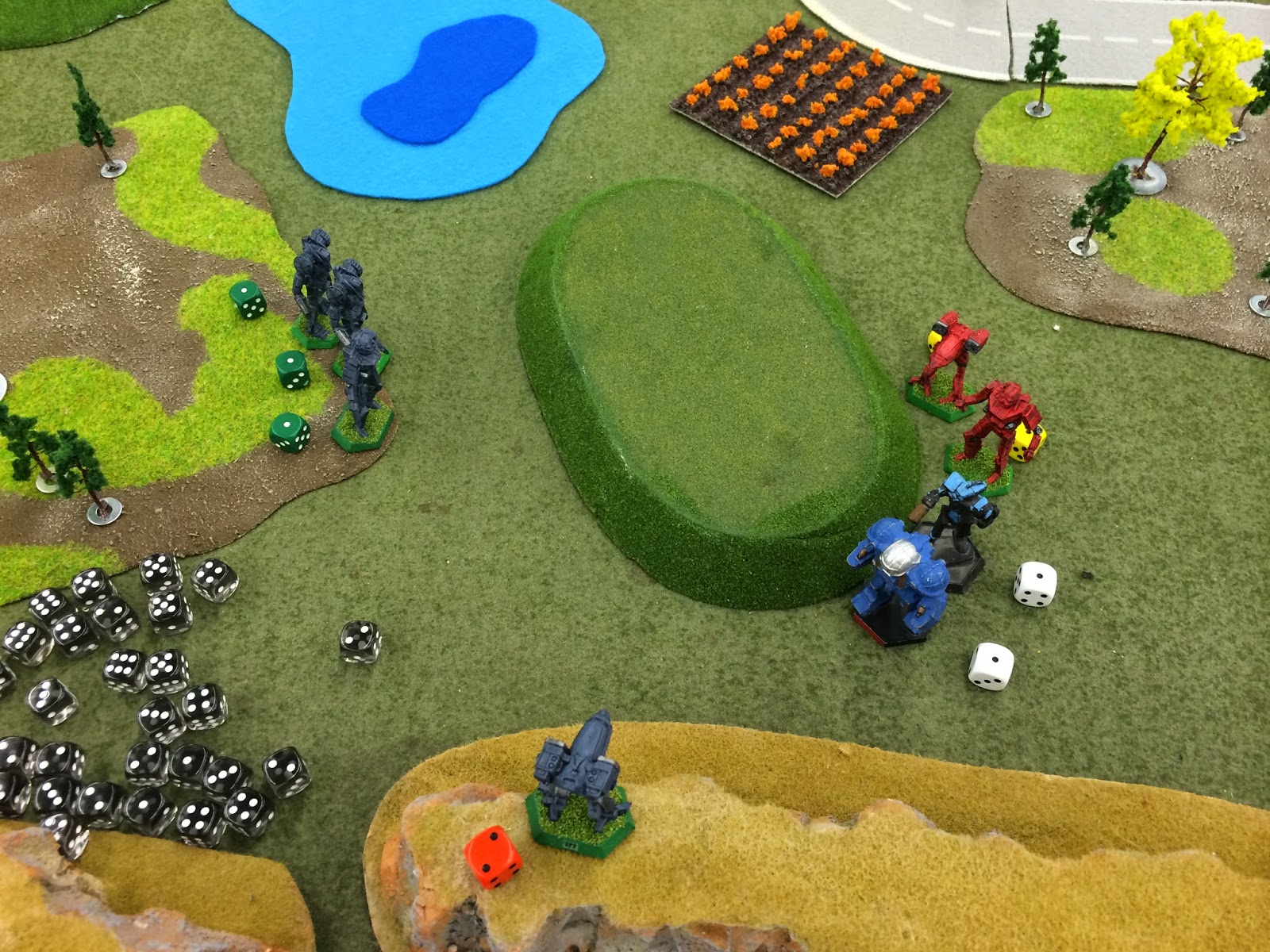 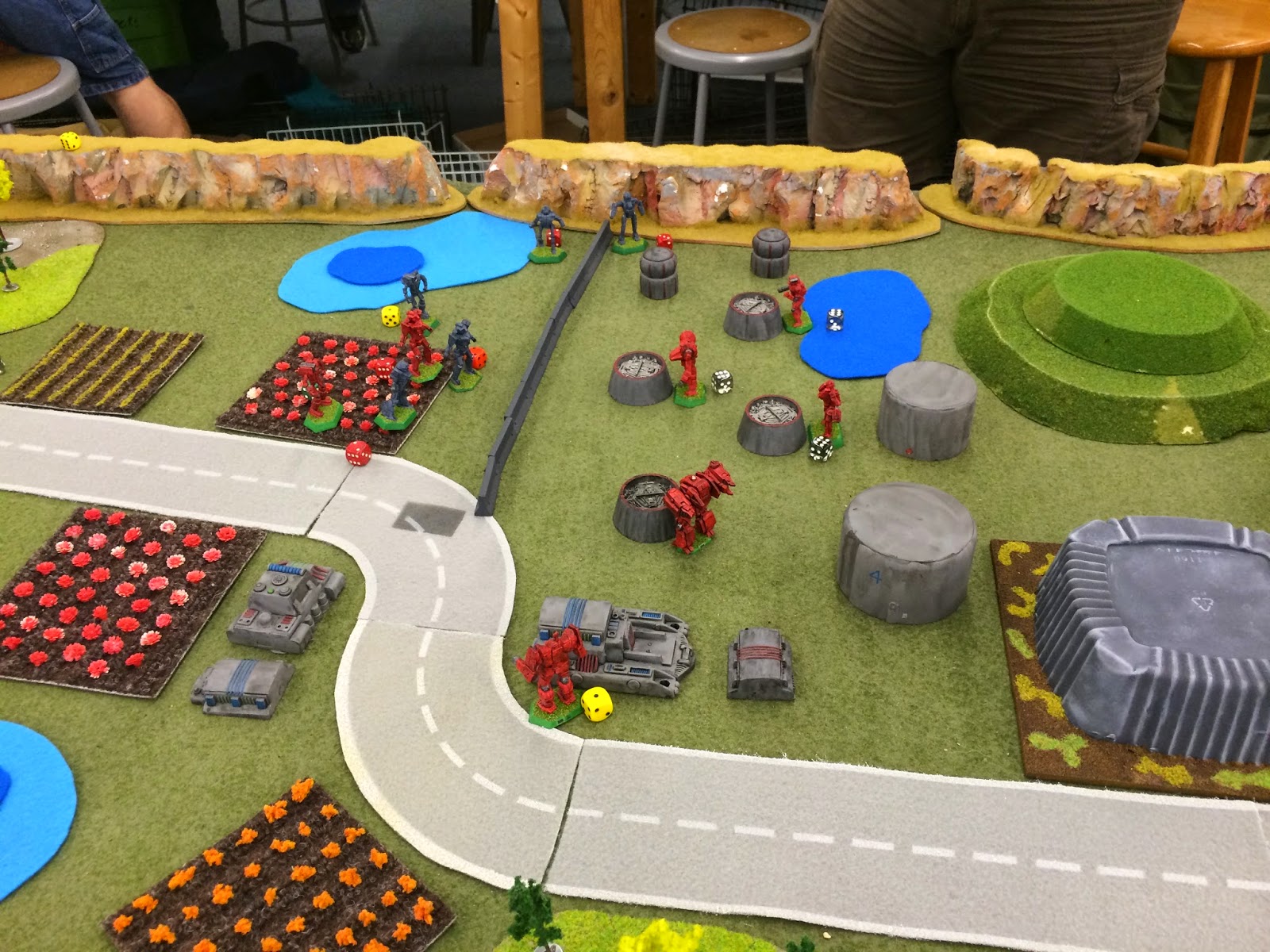 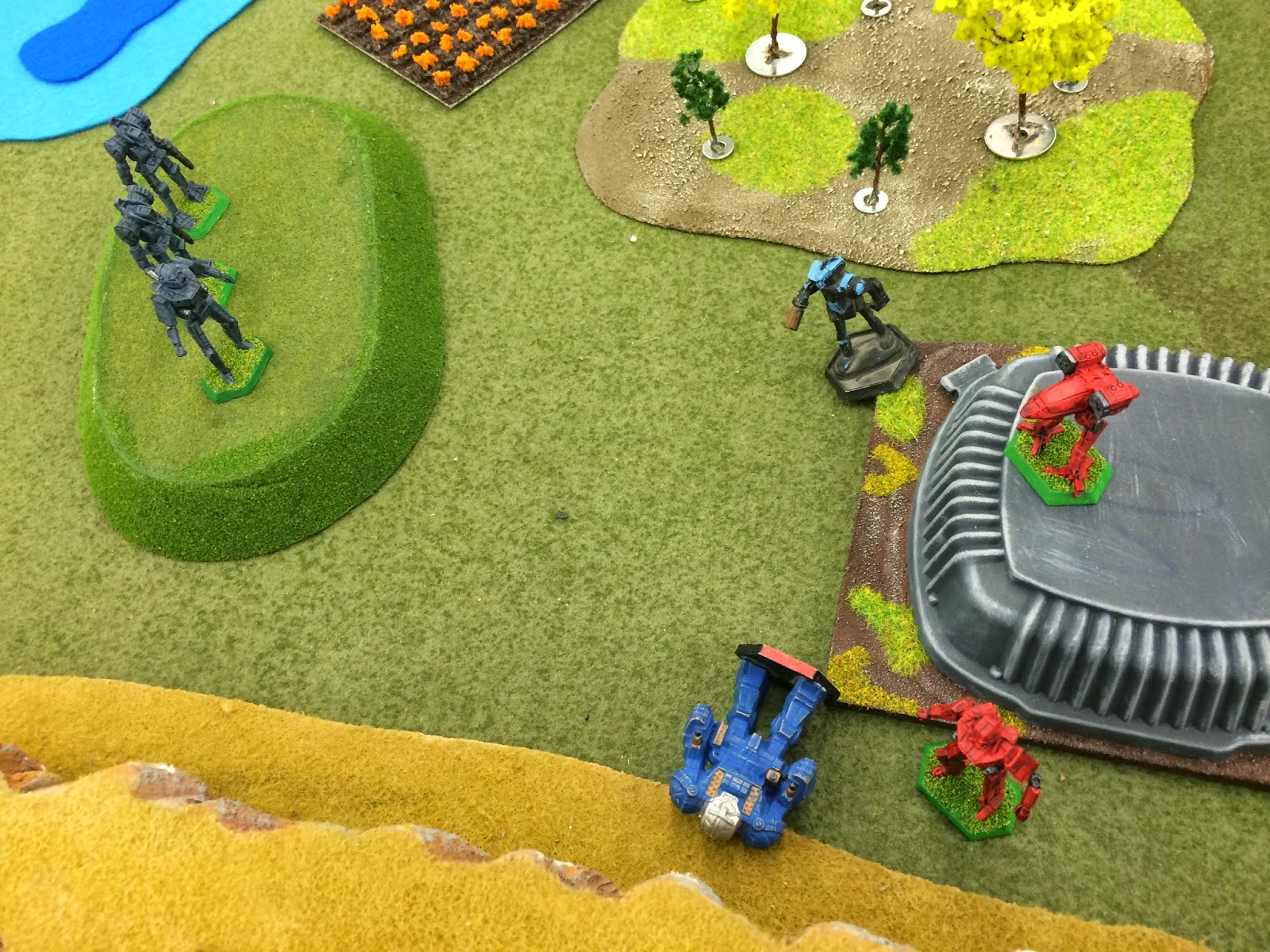 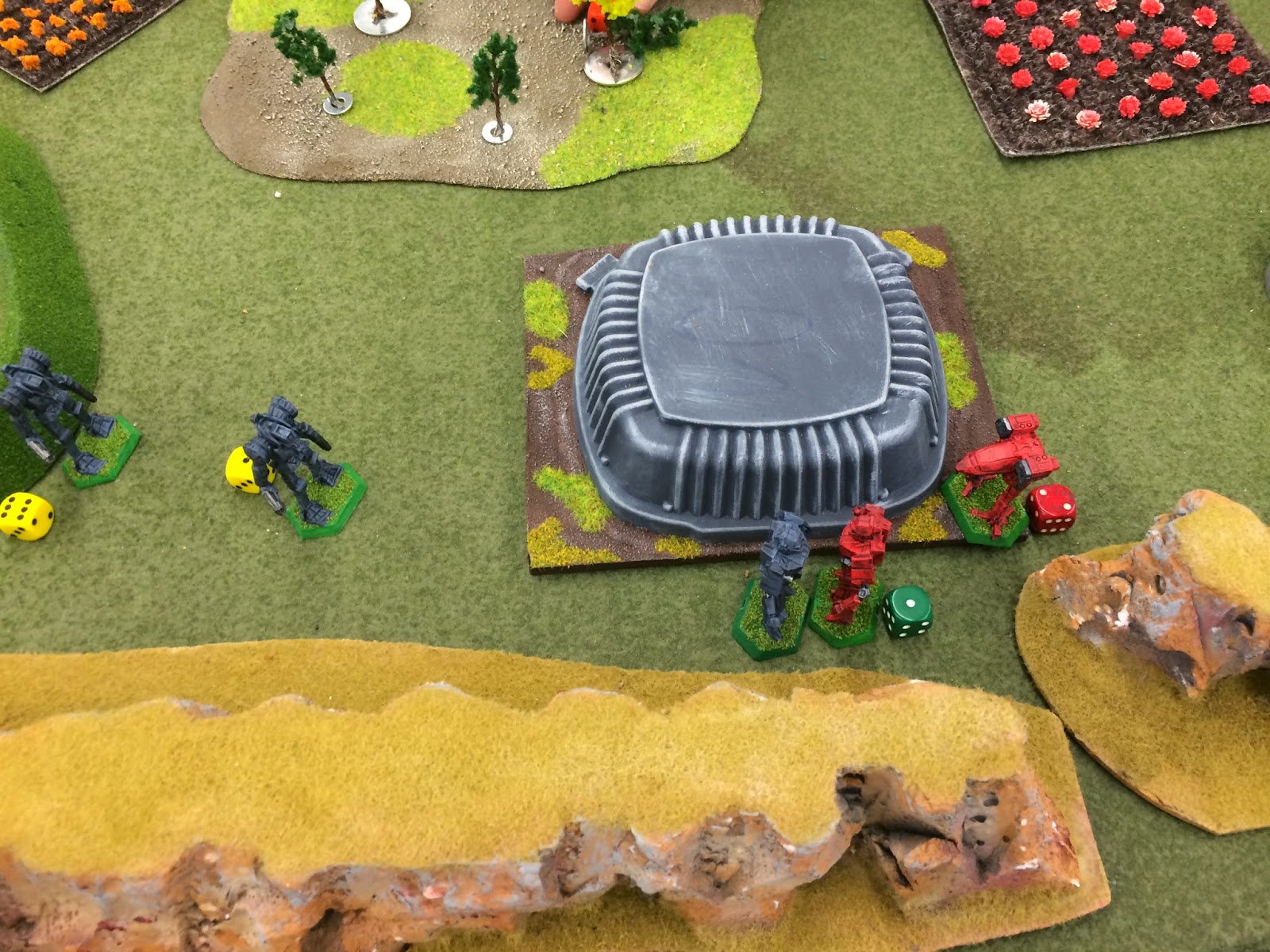 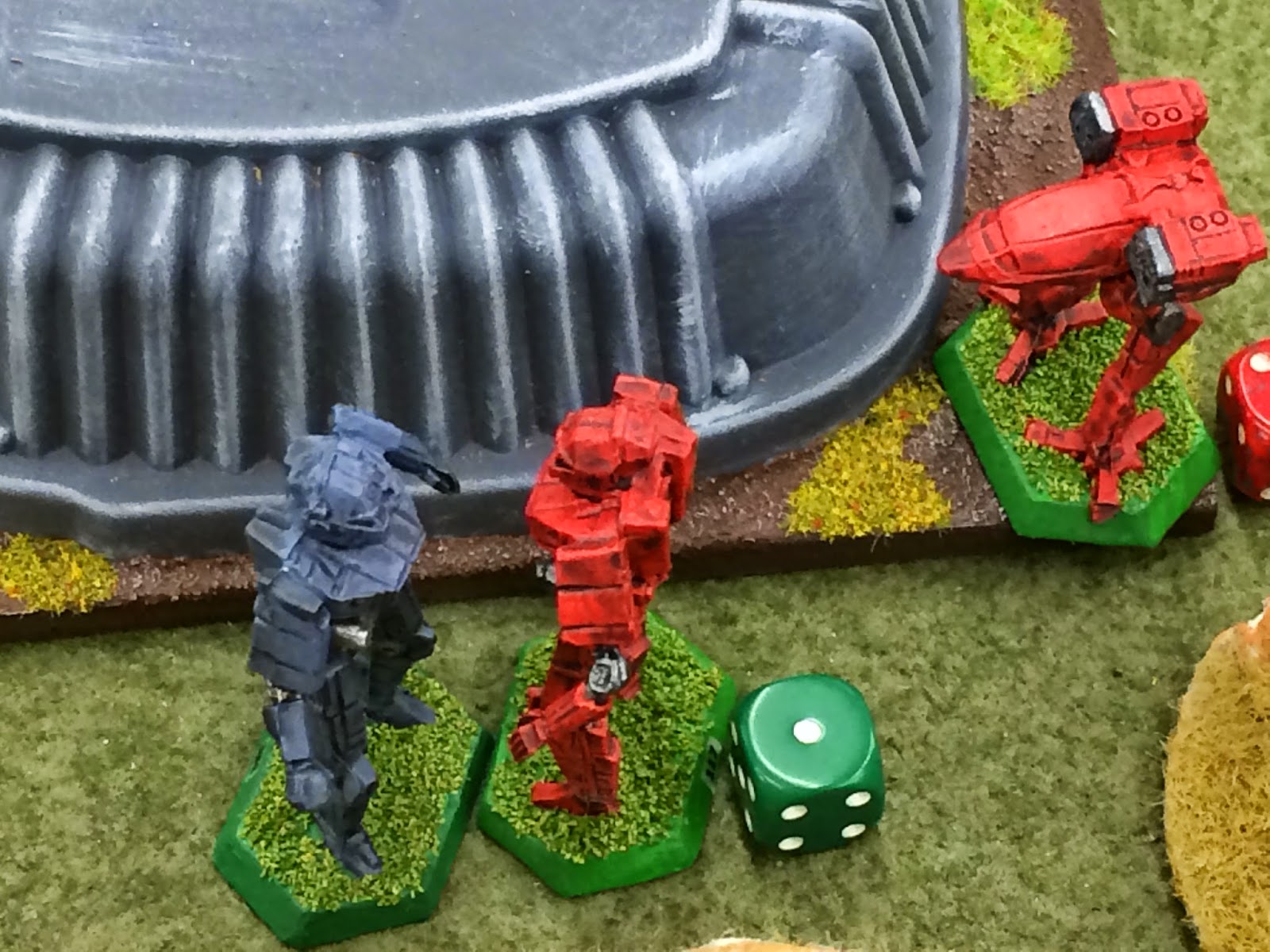 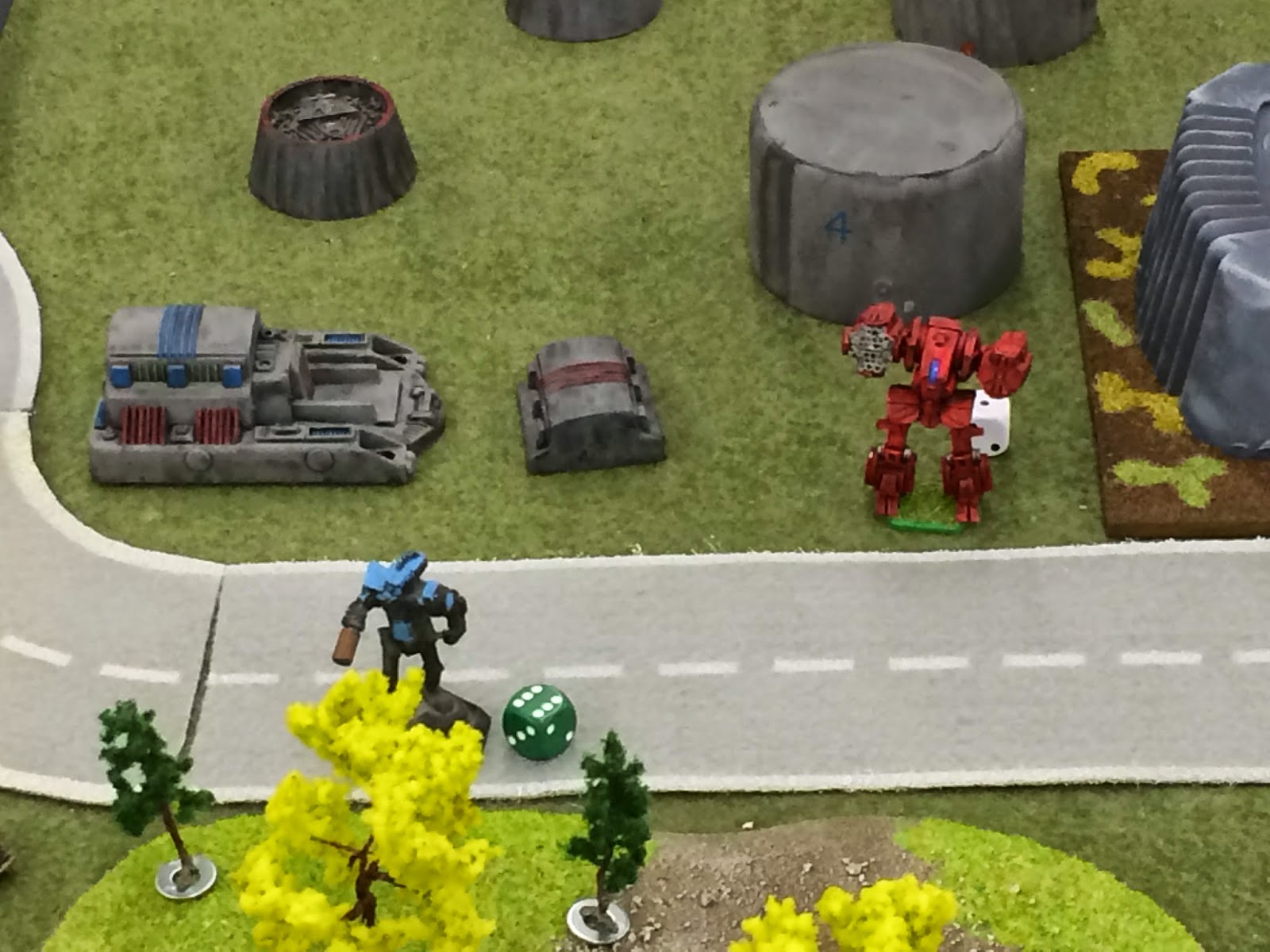 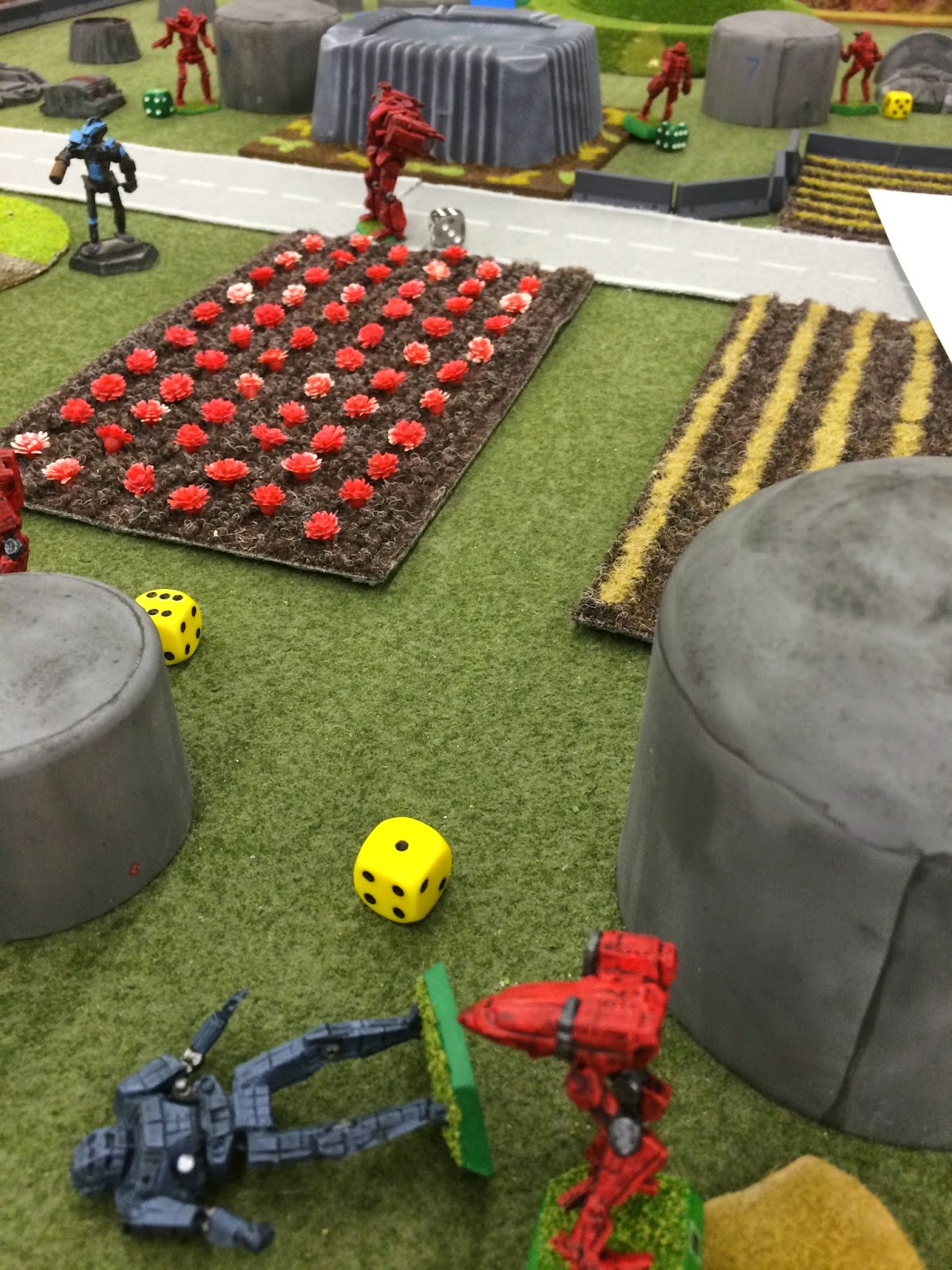 The game moved well and we finished it within about 2 hours 30 minutes.  Not bad.  The defenders held the line and only let a single mech cross the table.

I will be adjusting a few details to try to balance the game a bit more.  Primarily this will come from having the forces only needing to cross the 4 feet instead of 6 feet by changing the direction the battle moves.  I will also have one of the defending lances set up at the back of the table instead of the middle.

If you haven't played Alpha Strike, I encourage you to give it a try.  It is a simplified version of BattleTech with much less record keeping.  I think it still has the feel of BattleTech, but it allows larger games to be played in much less time.  You can play Lance vs Lance battles with Alpha Strike and they will take even less time.

Have you played Alpha Strike?  What did you think?