My buddy Bill picked up a set of rules for playing American Civil War games called Longstreet.  The rules cover game play, but also provide a campaign system.  Randy and I squared off in a battle over the holiday weekend and Bill taught us the rules.

I have not yet read the rules, (I relied on Bill's read through) so please forgive any mistakes or misunderstandings presented here.
Impression:  My overall impression of the game is positive.  It was fun and we had some exciting ebbs and flows where it looked like I would crush the rebels but then they came back and almost took me out.  In the end I won the game and broke the rebel forces, but through the campaign phase, I suffered more losses and didn't get much in the way of reinforcements.  I'll talk about the campaign phase a little more later.
As this was a first play we were given very similar armies.  The only difference was the Rebels got 1 artillery unit with 3 guns while I got 2 artillery units with 2 guns each.

The Grand Army of the Missouri Valley included the following regiments (the unit names are real, but their inclusion together and the time frame for service is not):

Leader:  1 Eagle General Douglas Boone Hopkins.  He has had European service and has a personal physician.

This works the same for movement and combat (charging/close assault).  Movement through difficult terrain requires another card to be discarded as well, but 1 card discarded allows all units moving in difficult terrain to move.  You don't need a separate card for each unit.
On your turn you can activate a fire phase (which must go first) and then either a movement phase or combat phase.  That makes decisions challenging at times because you may have to choose between leaving a unit in a vulnerable position while you move units up to support it or charging with that lone unit without any support.

There are also some interrupt cards that can be played in response to certain actions the enemy takes.  These take affect immediately, but are discarded from the game when used so won't be reshuffled into your deck as the game progresses.

The goal for the game we played was to break our opponent.  To do that you need to reach their break point.  This brings me to another interesting mechanic.  In the end phase of each players turn you will see if you have met the victory condition.  So I add up the number of enemy bases that I have killed and then roll a D6.  If the total is equal to or more than the break point, then the game ends.  What this does is allow for a (somewhat) varied end point.  My opponents break point was 24.  I had killed 19 bases and rolled a 5 in the end phase to end the game.  If I had rolled 4 or less I would have had another turn of him beating on me.  This keeps you from making those stupid moves that will for sure end the game, but leave your forces open to counter attack.  If you do that you might not end the game and then your troops are standing out there exposed and open to enemy attacks.

To be fair, I am no historical expert.  I don't know how accurate these battles portray ACW tactics, but it was fun and I look forward to another game.
Campaign System:  Now let me talk about the campaign phase.  This is another aspect that I found interesting.  Many games are played with the mindset that the losses faced here don't matter since it is a one off game.  We played this with the intention of playing through the campaign.  So at the end of the game we had to track the losses to our units due to battlefield casualties.  Many of the bases lost in the battle were just wounded or had run off, however, some of the men were really dead.  Each player permanently loses 1 base for each 3 bases lost in the battle.  I lost a few that way.  After that, you have to see how many people died from disease or just went AWOL.  You roll a D6 for each base remaining in your units and on a roll of 1 you lose  a base from the unit.  I rolled a lot of 1s.  Now recruits are more susceptible to disease and running off so each recruit unit loses 1 more base from their numbers.

After you figure out losses, you have campaign cards that you get to draw from to see about adding reinforcements.  I stated the battle with 50 bases.  I ended with 23.  There is some truth to the saying, "Won the battle, but lost the war".  I haven't lost it yet, but feel like I was well on my way with the disease that is running through my camp.
With the campaign cards I was able to add 1 additional guns to each of my artillery units and two bases to a unit.  Since I was still below the minimum force size I was able to request additional reinforcements and received an infantry unit with 6 bases.

You also have to check to see if your units elan and quality have decreased from the losses.  I don't remember exactly how this works, but I know several of my units went from eager to seasoned (that sounds good, but it is actually bad).

I'm slightly worried about my next battle, (my opponent didn't lose as many bases and got reinforced by 2 units).  But I know that by the grace of God, the Union forces will be victorious and will be successful at maintaining the cohesion of this great land.

My Grand Army of the Missouri Valley now stands as:

Leader:  2 Eagle General Douglas Boone Hopkins.  He has had European service and has a personal physician.  6 experience points.

Summary:  I like it.  This game introduces an interesting mechanic for ordering units and activating phases.  And the campaign system seems to be well thought out and not too overly complicated like some can be.  I hope to get more games in and look forward to seeing how the campaign progresses.  I am hopeful that the loses suffered in this battle won't destroy my chances as the war progresses.

Thanks to Bill for painting all the models and setting up the game for us.  Thanks to Randy for providing such as skilled adversary.

I finished 10 battle wagons for my boyz.  I'm happy with how they turned out and will be adding more with the same colors. 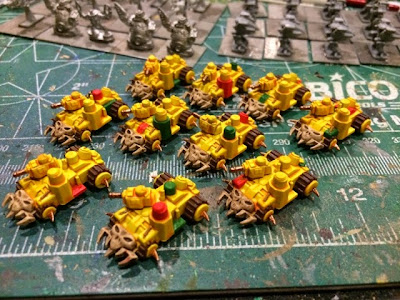 I also tested these colors on a couple of Stompas.  I'll be adding more of these to the warband too. 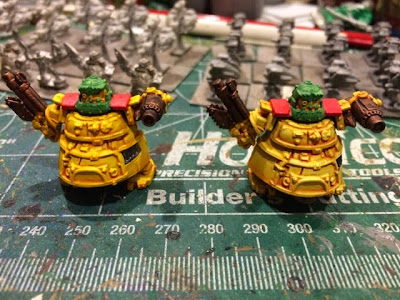 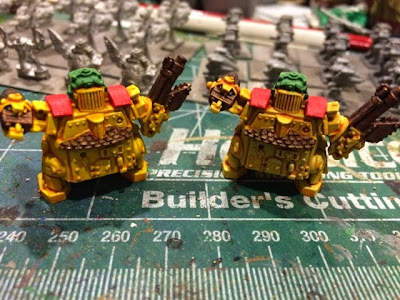 How are these for are start?
Posted by sean gewecke at 9:27 PM 2 comments:

I have been slacking off on the blog a bit lately, but I have been working on a few projects. 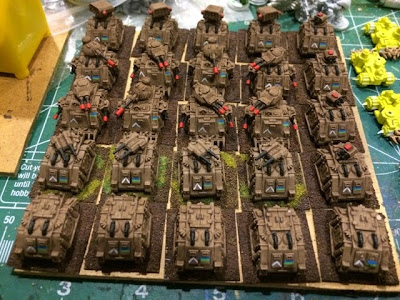 I've just completed a few additions to my Epic Space Marines.  Next for them will be some titans and more infantry.  I am undecided if the titans should match the color scheme, but I am leaning toward painting the titans with the same colors.

My Epic Orks have also seen some time on my paint table and I think I have a paint scheme that I like.

Here is a finished battle wagon (aside from a base). 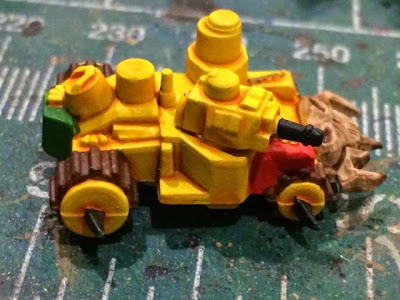 Here is a picture of a batch that is a work in progress. 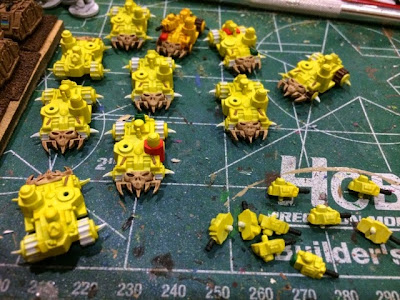 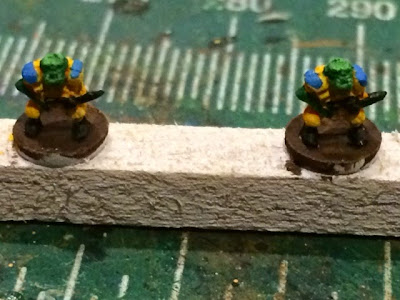 What do you think of the Ork colors?

I got to make a trip to Lee's Summit, MO for the Recruits gaming convention at the end of September.  It is held at the local high school so is nice and cheap ($5 for the weekend).  There are a nice variety of games including historical, sci-fi, and fantasy.  There are tournaments and open gaming, but in my opinion the best part is all the game scenarios that people set up and run through-out the weekend.  There are various vendors and a silent auction as well.  I always find a good deal or two.

I have a group of friends that typically attend this event and I have been going to this convention when I can for the past 3 years.  The convention used to be held twice a year; spring and fall, but is now a once a year event in the fall.

I took a few pictures of some of the games at the convention and thought I would share them.  This is not a definitive collection of photos of all the games. 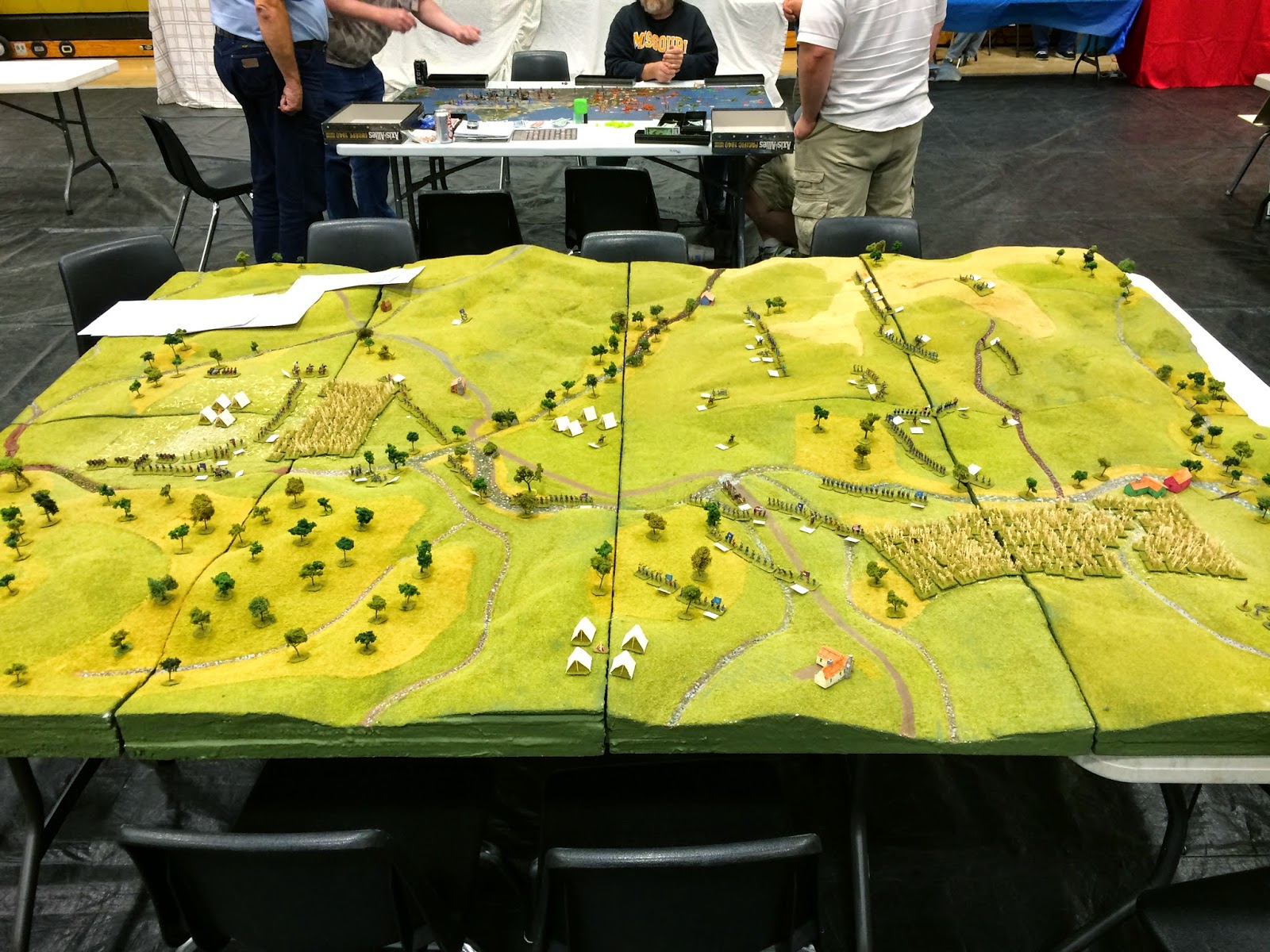 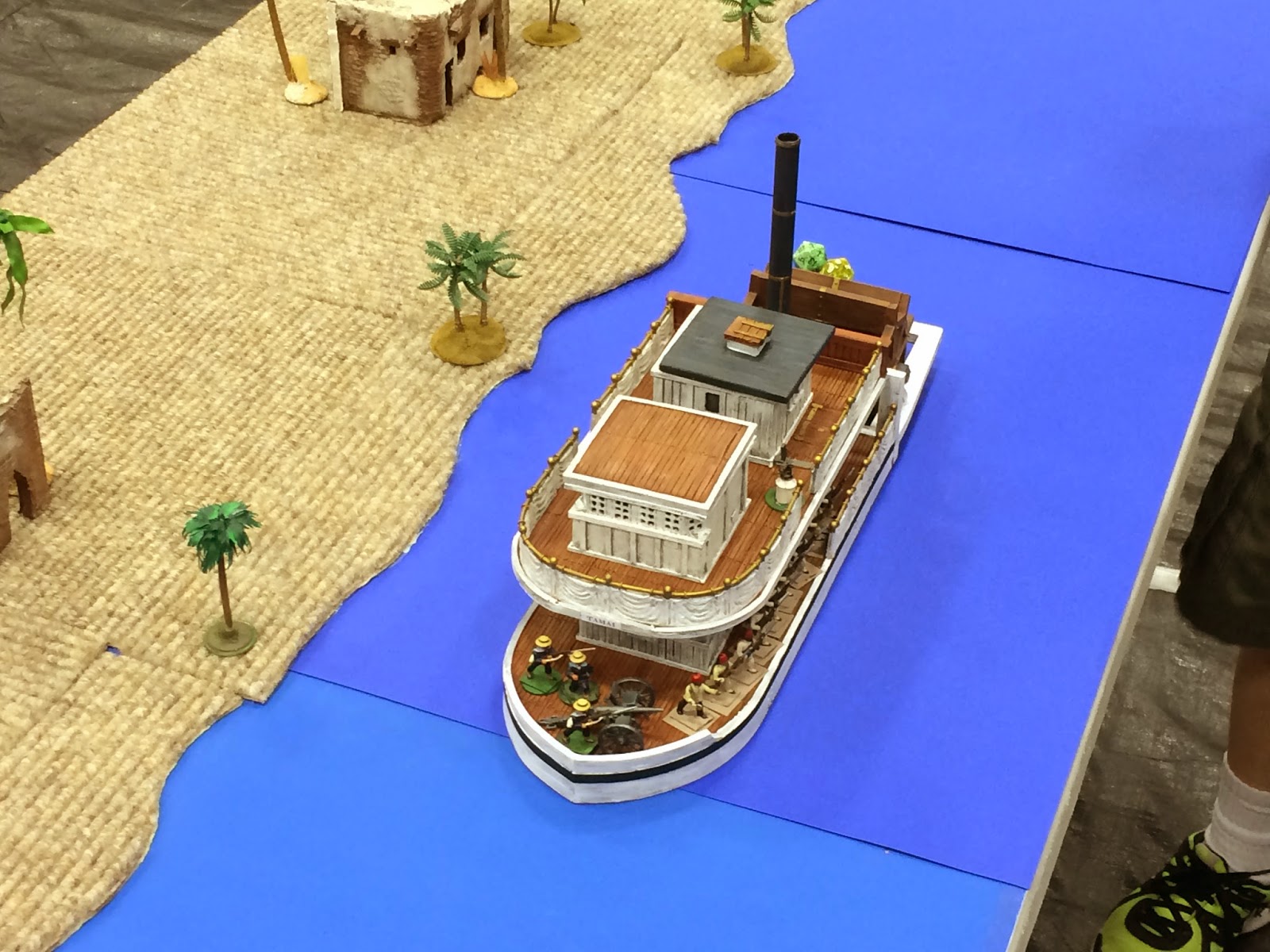 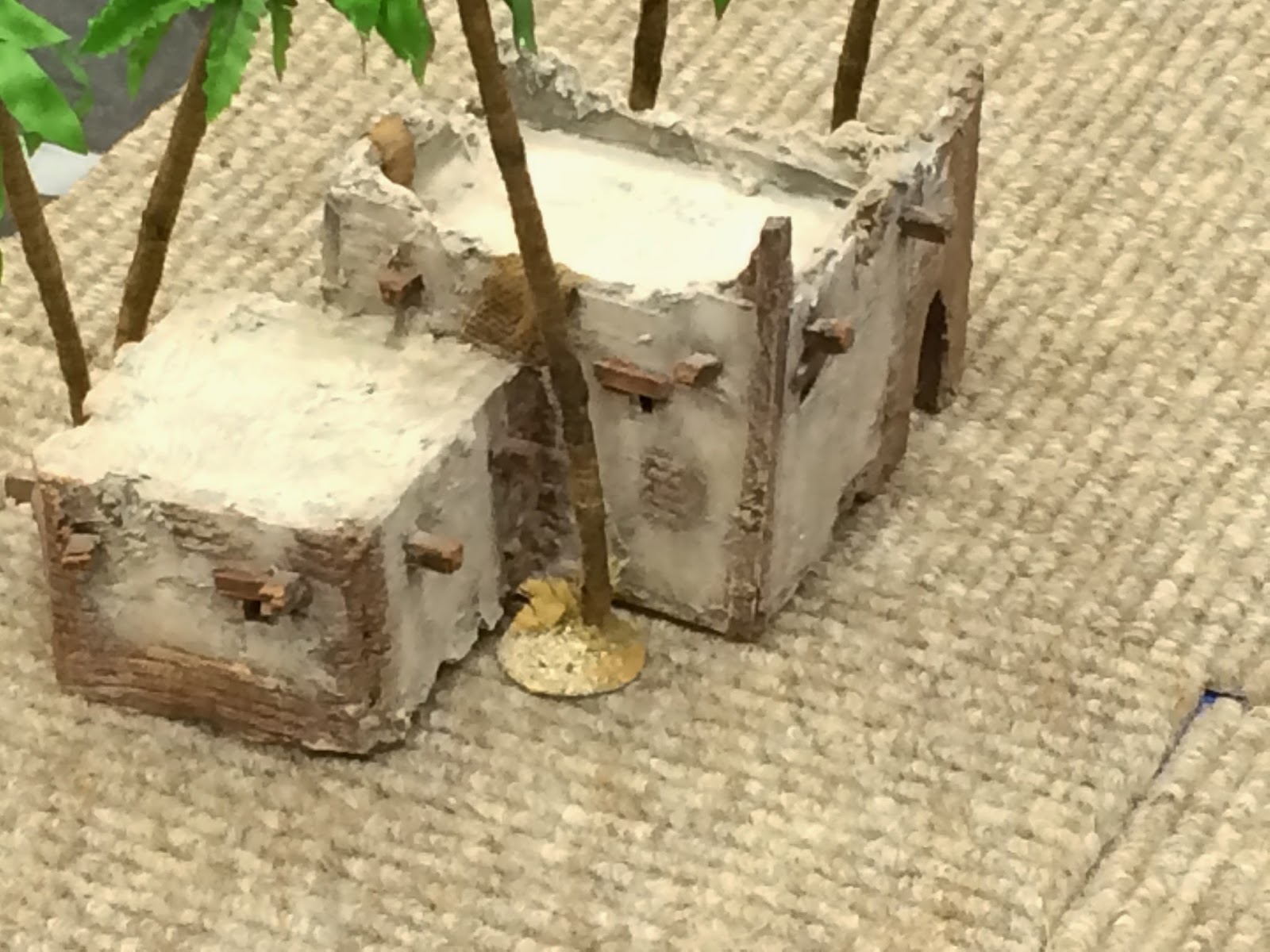 This is a great con to attend if you are close.  I drive a couple of hours to it and it is always worth the trip.
Posted by sean gewecke at 3:09 PM 2 comments: