Painting the Walking Dead: All Out War - Assembling and Painting Barricades

The Walking Dead: All Out War game comes with cardboard tokens for all the terrain features.  I want to have something a little more dynamic to go along with all my painted models.  3D terrain will add a new level of detail to the game and add to the appearance.

I dug around in my bits box and assembled a few pieces from some scrap wood.  I painted the various items up and glued them to some bases.  I now have several barricades that I can use in my games.

A little work and you can really improve the look of the game and add to the experience. 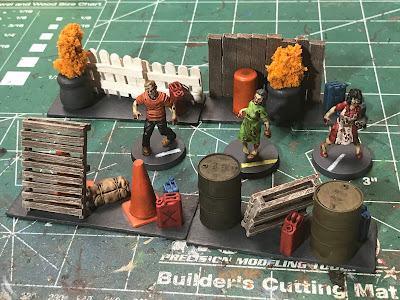 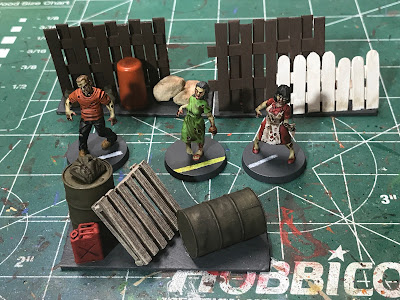 Painting The Walking Dead: All Out War - Brian

I picked up the Prelude to Woodbury expansion for The Walking Dead: All Out War game published by Mantic Games.

This expansion gives you a more fleshed out solo rule set to play the game and looks at the Governor's history before he became the Governor.  This box set is actually a stand alone game that comes with an abbreviated rule book, so you can play the game without purchasing the core box.  You get Brian, 5 walkers, dice, tokens, and everything else you need to play the game.

I wanted to get Brian painted so I could use him as I play through the scenarios in the rule book.  I used my simple technique of base colors and then an appropriate wash and he turned out pretty well.

I'm not going to win any painting contests, but he was finished quickly and looks nice on the tabletop.

Here you can see the difference between the base colors only and the washes being applied.  A wash goes a long way to add depth and shading to a basic paint job and in my opinion is a great tool for any painter. 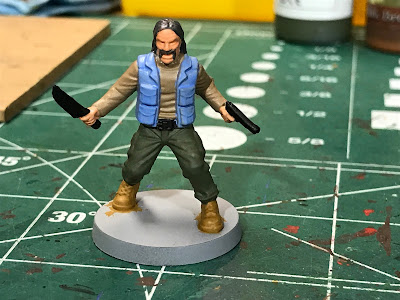 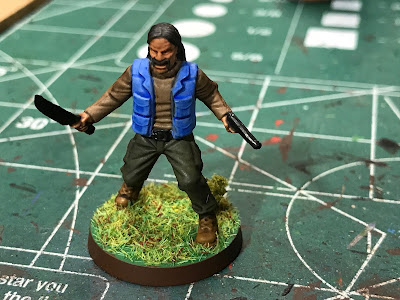 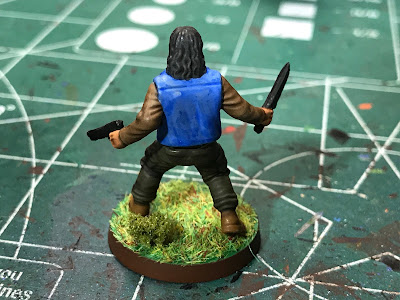 Posted by sean gewecke at 8:17 PM No comments:

The Walking Dead: All Out War - Solo Battle Report 1

Next up for my 6 X 6 Game Challenge is The Walking Dead: All Out War.  I've played this solo using the Prelude to Woodbury expansion.  My first play was fun and it is helpful for learning the rules of the game.

This scenario sees Brian, before he becomes the governor out looking for some supplies.  He just needs to search the three supply tokens to win the scenario. 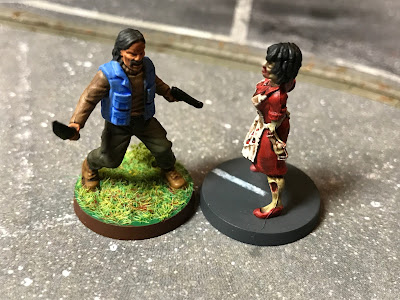 We will be following Brian for the next few games and we will see what his future holds.
Posted by sean gewecke at 7:53 PM No comments:

The next and final ship for Doug's Austria-Hungarian fleet is a Budapest Class Light Battleship.


I took a few progress pictures so you can see how these come together without watching the video. 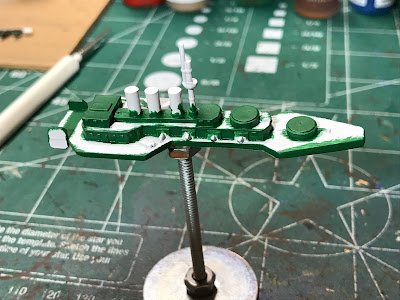 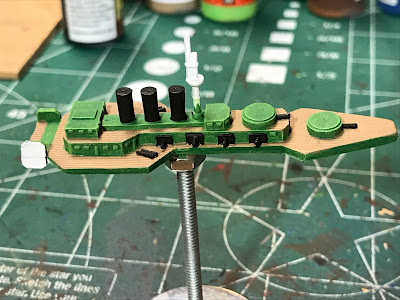 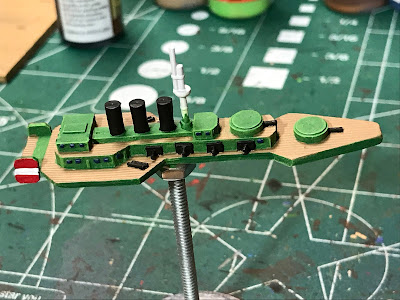 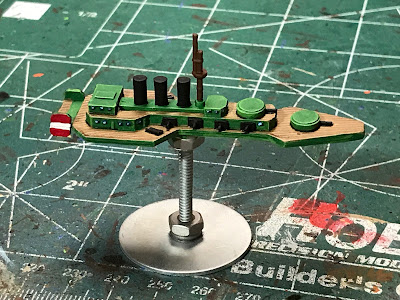 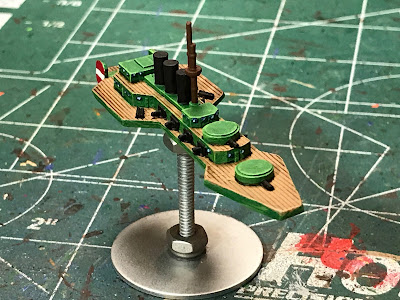 The fleet has turned out very nice in my opinion.  Using the Imperial Skies rules, this fleet totals 510 points. 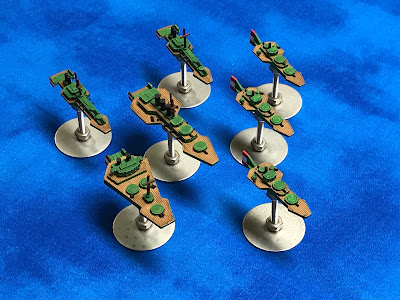 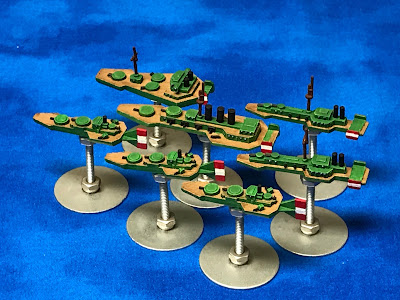 This fleet is a great example that you don't need a complicated paint scheme to make a decent looking fleet.  Just spend some time putting some paint on the models and in no time at all you will have a fleet ready for action. 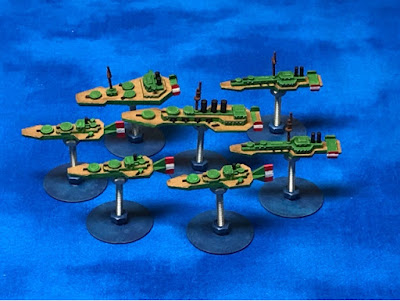 You can step up the detail and shading or you can even go for a more simple paint job.

Round of Fire - Play Through 1

Round of Fire is a game that is currently in development.  I have been given the opportunity to help a little with play testing the game.

The game does not have a specific period or genre attached to it, so you can play the game with lots of different models: Old West, Pulp, WW2, Sci-Fi, etc.  I'm not sure how well it would work with a fantasy setting, but you never know.

After a read through of the rules, I generally like what I see.  There are some interesting mechanics and I was very interested in the activation mechanic. 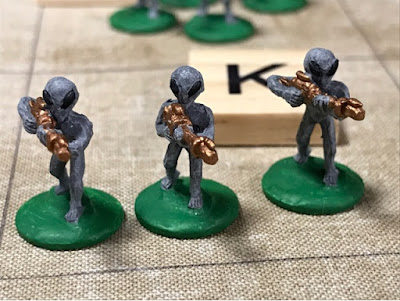 I like how this sounded and found it to work well in the game as well.  I liked the idea that if you are taking quick actions, or are well trained, you can act more often than a team that is doing a more complicated/lengthy action. 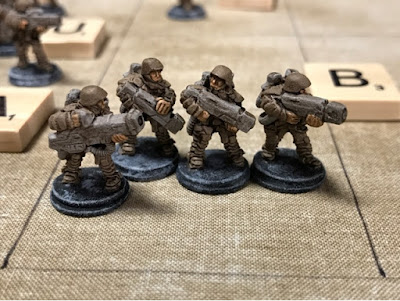 The game also allows for use of suppressing fire to push units along the activation wheel.  With this action you can delay an enemy unit's activation.  This adds some interesting tactical choices and means that sometimes you will be shooting at another unit without the chance of killing anyone, but it still has a useful purpose. 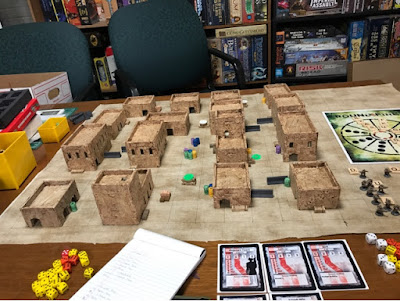 After playing the game, I am not impressed with the combat mechanic.  It seems to be more complicated than it needs to be, but this is just my first game.  Your fire is based on the weapon you are equipped with the range to the target and if there is any cover.  That is straight forward enough, but then target gets a save and that is where the process starts to break down.  The target gets to roll 1 die for each hit made on them, but then can add dice for their toughness value as well as dice for their armor, but then the Armor Penetration of the weapon reduced the dice added from the armor.  A 5+ on each dice is needed to shrug off the hit.  In my game, almost every model had the same weapon (aside from a few machine guns, that didn't get to fired much) so it wasn't that difficult to keep track of this, but if you have a wide variety of equipment (and the game has a pretty wide variety of equipment available) this could become much more cumbersome.  If the models doesn't save from the hits, then they are wounded.  However, you have to calculate of how wounded they are so you can see their status from the fire.  When a model is knocked out, he can be killed, bleeding, or unconcious.  So know you take 3 die and add dice based on the models toughness, but you reduce that pool based on any excess wounds received by the model.  So if he failed to save 2 wounds and only had 1 wound to start with, he has taken 1 excess wound so reduced his dice pool by one.  You roll those dice and based on how many successes you get, you determine the level of injury. 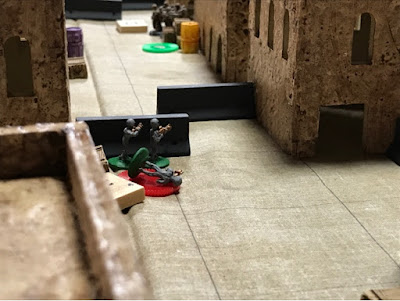 I'm not sure how to simplify the process and I will try to think of something to offer to the designers, but at this point, it just feels cumbersome and I would like to see a more streamlined process.

Overall, I did enjoy the game and think there are some very cool things going on in these rules.  I look forward to trying out the different factions to see how they work and using a bigger variety of troops and specialists.

The Reticulans took command of this battle field.  They eliminated all but one model of the Earth Alliance forces and managed to take control of most of the objectives.  They did all this with only the loss of a few soldiers.  The Earth Alliance will need to rethink their troop selection and equipment before the next engagement.
Posted by sean gewecke at 11:09 AM No comments:

Email ThisBlogThis!Share to TwitterShare to FacebookShare to Pinterest
Labels: 15mm, AAR, Round of Fire, Sci-fi, Solo

I wanted to add more terrain to my collection and was looking for something that I could easily put together and that would work in several different game periods.

So I broke out some clump foliage, tongue depressors, and flock.  A little work and ta-da, I've got a small collection of hedgerows. 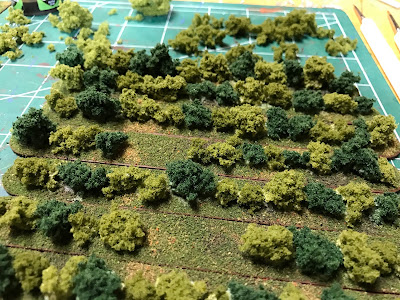 These can be used along roads, around fields, around houses, and where ever you think they would be appropriate. 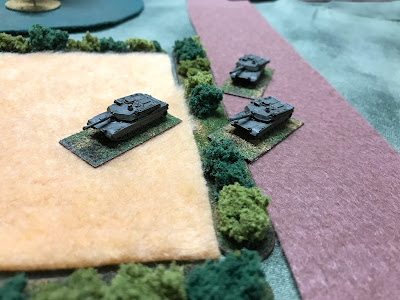 These aren't really all that fancy, but they will be effective and I am please with how they turned out. 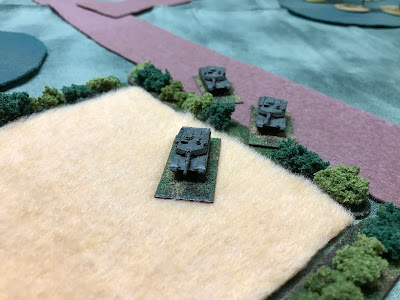 An added bonus is that these will also work with my 15mm gaming.  Terrain that works with multiple projects is always a good thing. 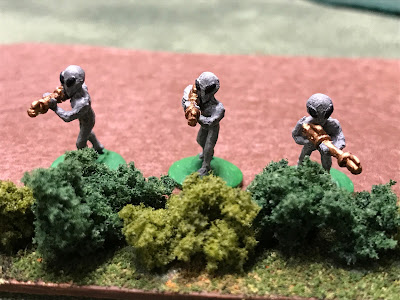 The next ship for Doug's Austria-Hungarian fleet is a Prinz Eugen Class Destroyer.


I've used the same paint scheme on this as I have all the other ships for this fleet and they are starting to look like a nice group of ships. 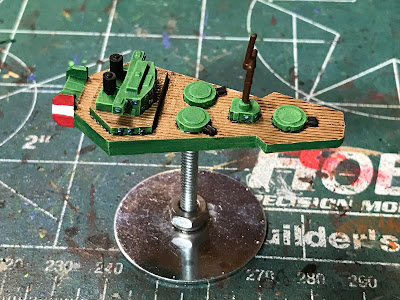 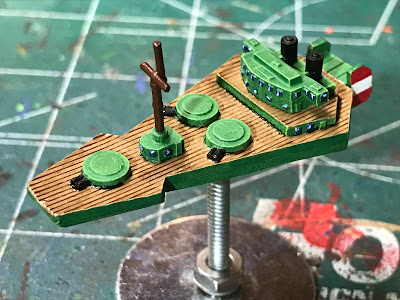 I have one more ship in my queue for this fleet and it will be complete.

Next up for Doug's fleet are a couple of Huszar Class Destroyers.  These are painted the same colors as the Danube class ships.


There isn't really anything fancy about the paint job, but I think they look good. 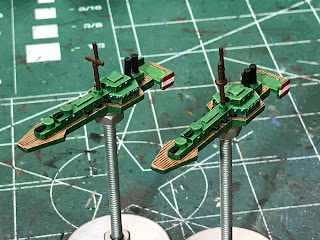 I've got a few more ships to paint for this fleet and will share them as I finish them.


Posted by sean gewecke at 7:36 PM No comments: