I spent a little time working on some BattleTech models.  I want to add some combined arms to my Alpha Strike games, so I took some of the MechWarrior clix models I've got and rebased them to be used in BattleTech.  The infantry and battle armor are a little big, but they still look pretty decent on the table so bot big deal.

I made these as simple as possible.  I just cut the infantry off the clix base and glued them on a round plastic base.  I painted the base brown and then added a little flock.  Easy as pie, but I think they look good.

I plan to add more infantry so I can field larger numbers of these in defensive scenarios. 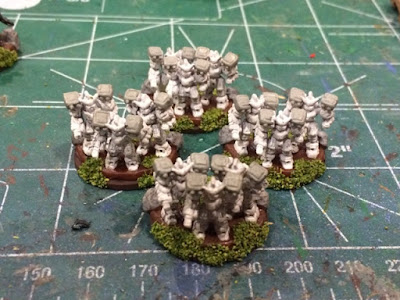 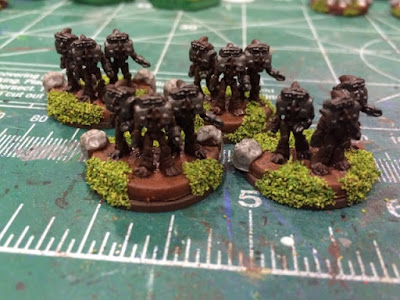 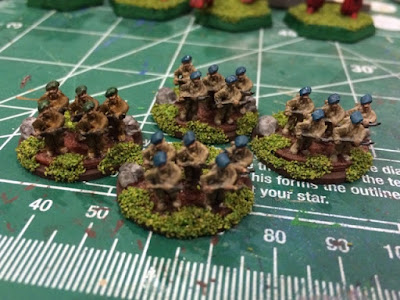 I also painted up some old plastics.  These are for my Kurita forces; the 2nd Sword of Light.

You can see them with a few stands of infantry for scale. 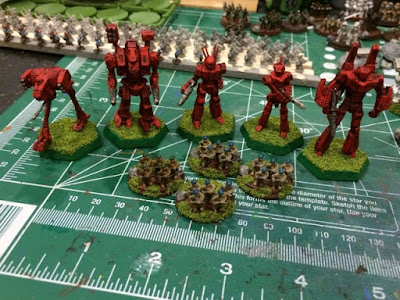 Here is a fuzzy picture of the Warhammer.  I still need to paint the cockpit screens on this group, but that shouldn't be a problem. 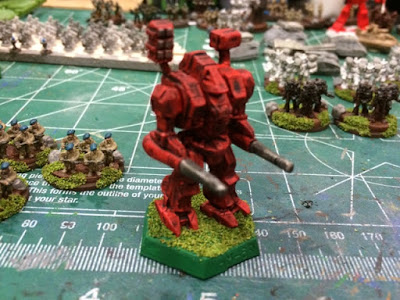 Posted by sean gewecke at 2:15 PM No comments:

Can anyone help me identify some BattleTech vehicles?

My fried Doug has a wide and varied collection of miniatures, rules, and games.

A while ago he gave me a container of BattleTech vehicles for use in my games. I've come to the point where I'm ready to paint some, but I don't know what they are?

I wonder if any of you might have some ideas about what these models are.  I would appreciate any info you could share.

Progress has been good.  I have a whole infantry company painted and based.  I just need to add some flock now. 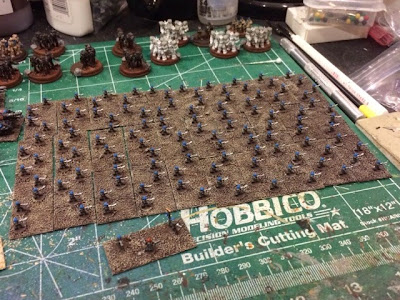 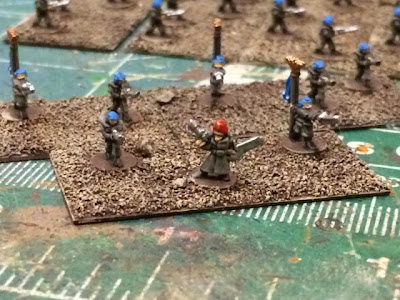 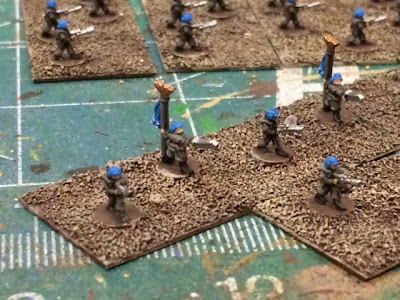 I have a platoon of Leman Russ tanks painted as well.  I like the way these turned out and look forward to adding more to the army. 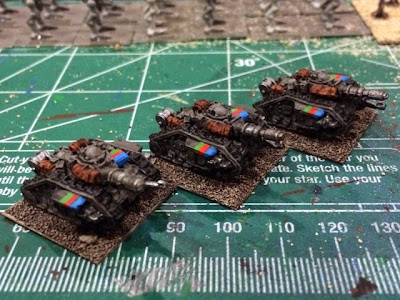 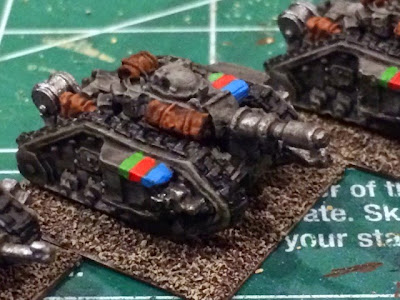 Last up is a platoon of sentinels.  The old plastics are pretty boring models, but I'm pleased with the results. 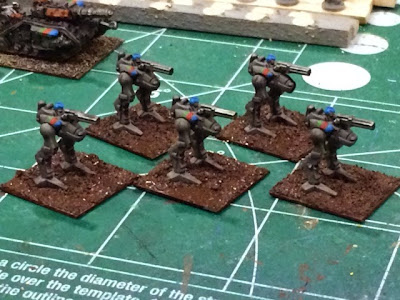 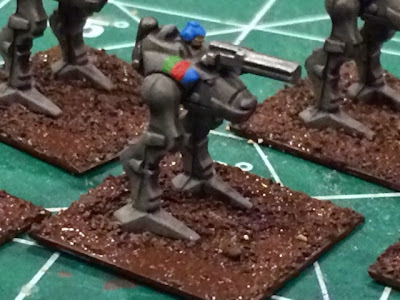 I've got to finish the bases on all of these, but that should go quickly.

What do you think of the grey?  Is it too bland?

Posted by sean gewecke at 7:11 AM No comments:

After taking a month off from this project so I could work on some terrain;I am back at it with some Imperial Guard.

Those in the Imperial Guard, working in the service of the Emporer, learn that life is cheap and you need lots and lots of foot-sloggers to make up a decent force.  I will have my work cut out for me as I want to have lots of infantry in my army. 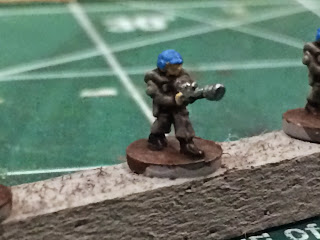 Here is a sample of what the hundreds of models will look like.

Posted by sean gewecke at 6:03 AM No comments:

More progress has been made on the sink hole table.  I spent a big chunk of Sunday cutting foam and texturing one of the boards with caulk.


I used tubes of caulk that I got at my local building supply store to attach the boards to each other.  After putting them together, I put a board on top and added a weight to let them dry before doing anything else.

Progress is happening.
Posted by sean gewecke at 8:33 AM No comments:

I have finished the first four boards, and they are ready for action.  I still want to do another two boards so that I can play on a 4' x 6' table, but I can play a smaller game on the 4' x 4' that I have completed.

Here is a few picture of the one of the boards with some mechs for scale.  I'm looking forward to playing a game on these and seeing how they work in action.

Check out that Battlemaster.  Very nice isn't it.  Thank you Bill for the well painted model. 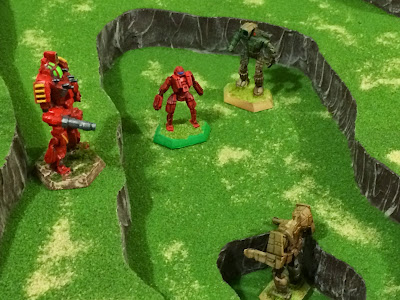 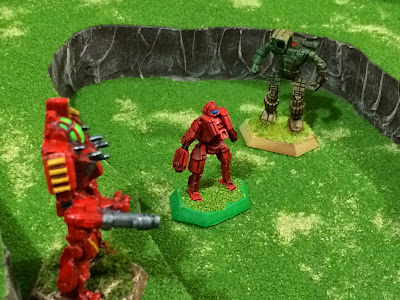 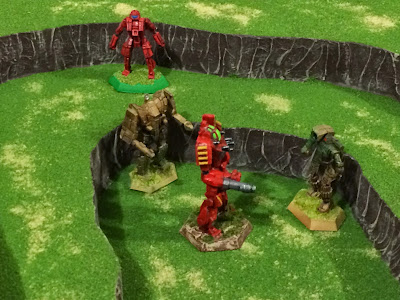 Here is the foam for the final 2 boards.  I've got them cut into 2' x 2' squares.  I will be back to these in the not too distant future. 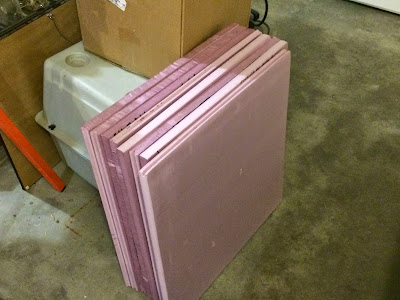 Posted by sean gewecke at 9:31 AM No comments:

I have a couple of friends at work that join me for a game now and then over our lunch time.

We have been playing through a campaign of Star Wars: Imperial Assault and were playing through a mission this week.  We didn't finish the game during our lunch time so I left it set up so we could come back to it today. 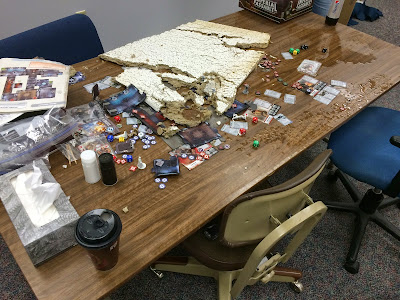 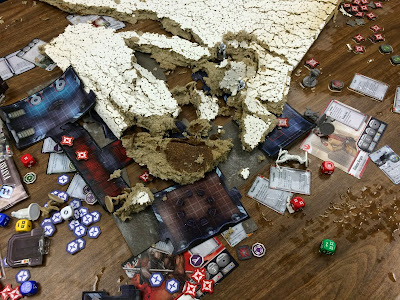 I guess this one is done for.  This won't be a matter of simply drying the stuff out as the board tiles and many of the tokens actually separated.

Well now I guess I will have extra models for bigger games.

Email ThisBlogThis!Share to TwitterShare to FacebookShare to Pinterest
Labels: Board Game

Bring Out Your Lead - A few great finds

My local gaming store, Gauntlet Games in Lincoln, NE, has an event each year called Bring Out Your Lead.

Anyone can bring in gaming related items and put them on a silent auction.  The store collects the money and gives store credit to the sellers.  You can find a wide variety of things from board games (old and new), unpainted miniatures or fully painted armies.  Normally I have a pile of stuff that I put up on the auction and I usually end up taking home a pile of new toys as well.

This year I didn't sell anything, but I did go down to see what was available.  I got a couple of great deals on some games and can't wait to try out my new finds.

My big purchase of the day was a copy of The Pathfinder Adventure Card Game: Skull & Shackles - Base Set.  I had been eyeing the first base set, but since this was such a good deal, I couldn't pass it up.  I got this brand new, still in shrink wrap for $35. 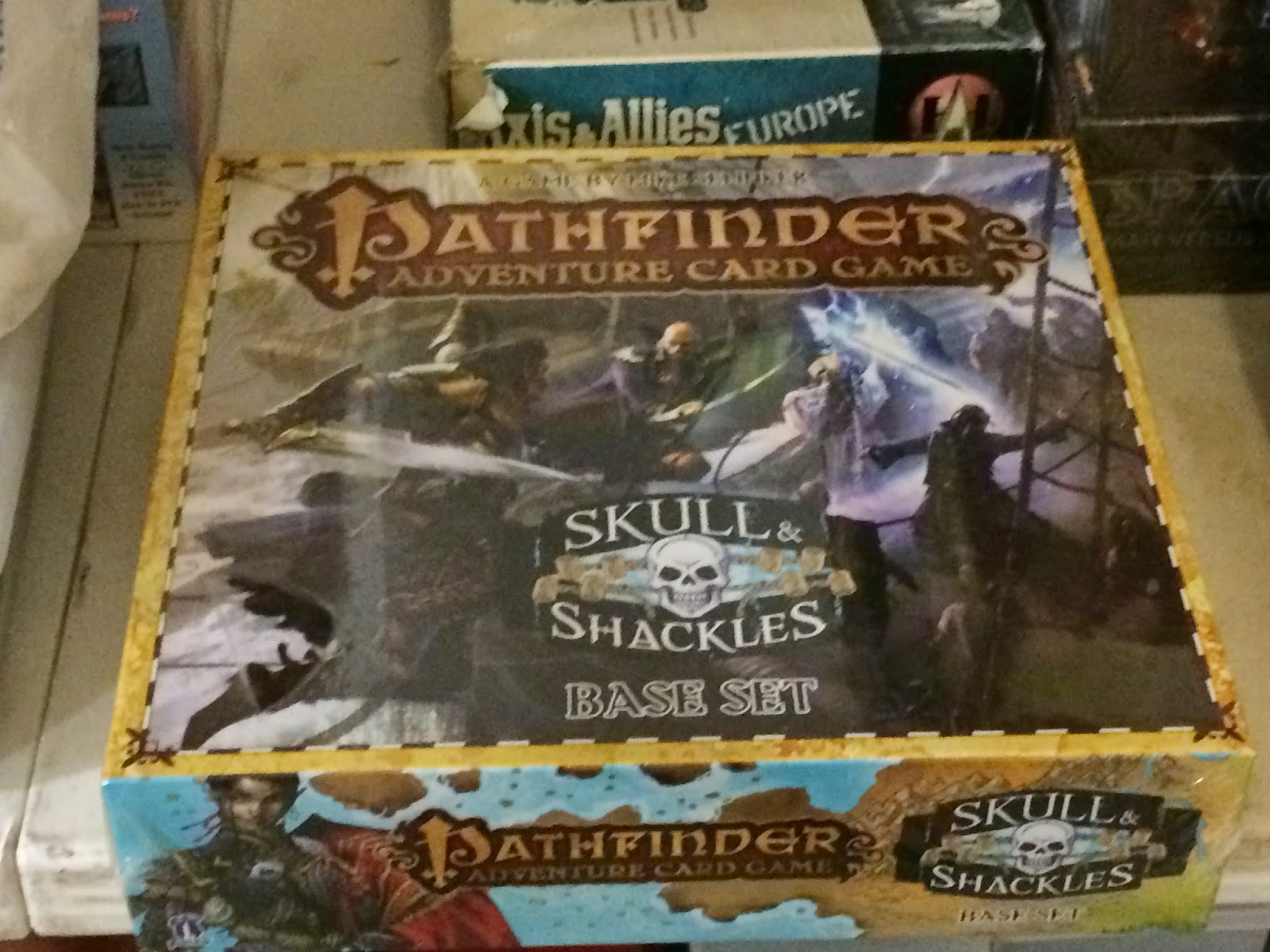 My next find was a copy of Axis & Allies: Europe.  The box is a bit sun bleached, but the contents are in good condition and it was only $3. 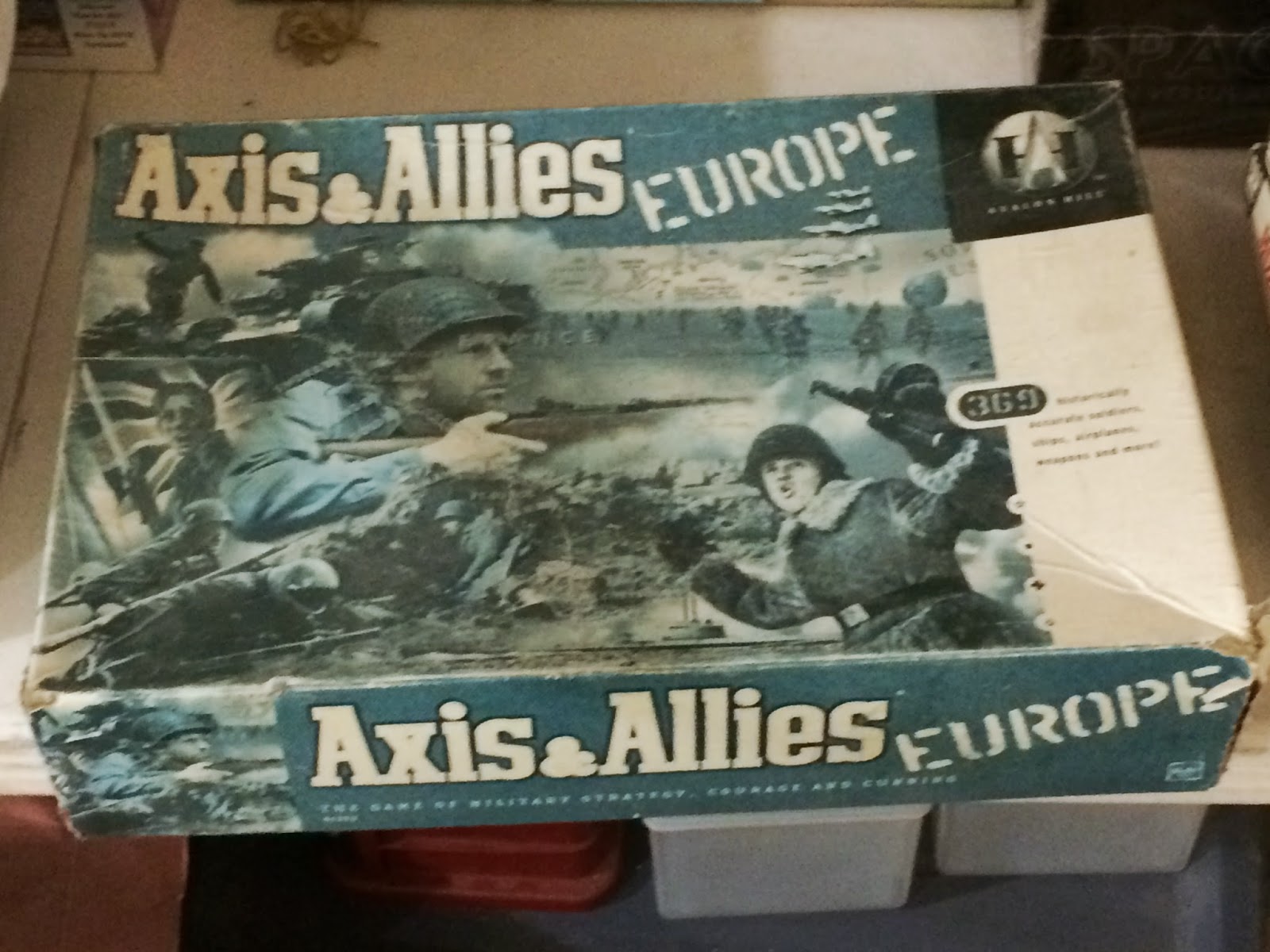 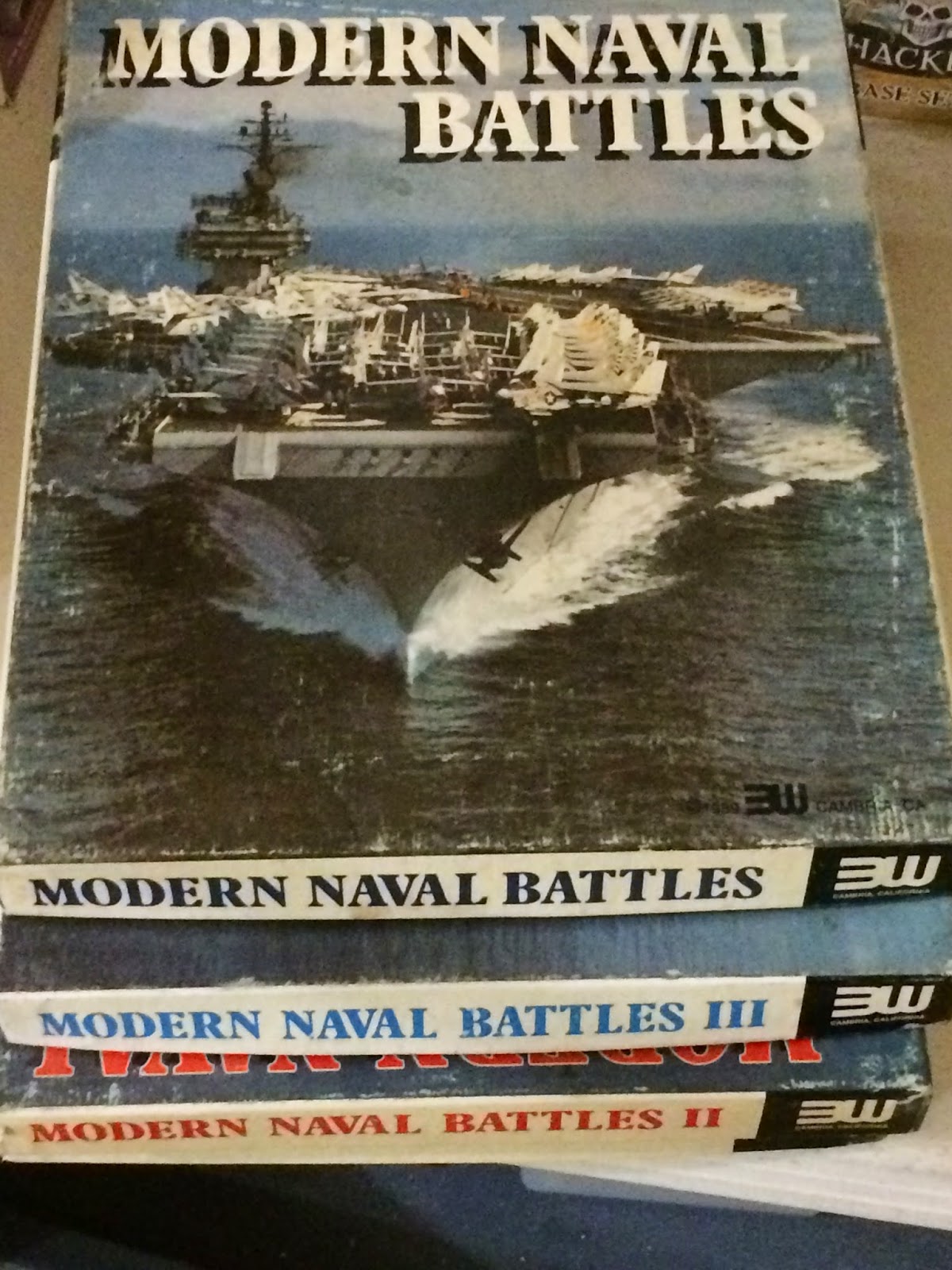 I also picked up Air Force and its expansion, Dauntless.  I had never heard of these before, but for $1 I figured I couldn't go wrong.  A quick look through BGG and the box shows me that this one might be a little on the complicated side.  I'm not scared though and look forward to trying it out. 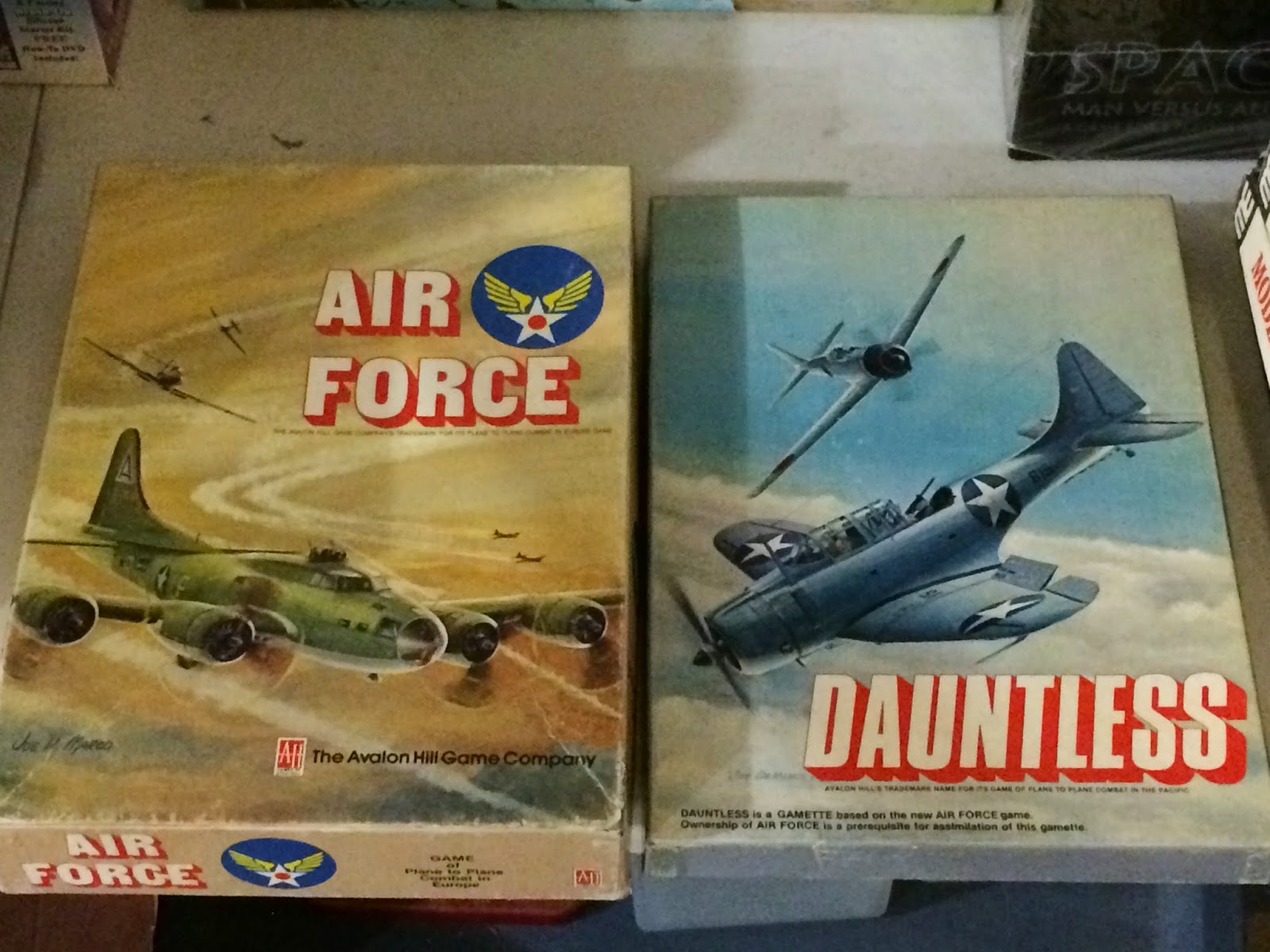 My last find at the auction is a game that I have been looking for on eBay at the recommendation of the Dice Tower's HAMTAG guys on YouTube.  The game is Ambush!  I hadn't found if for less than $50 and that was a bit more than I wanted to pay.  But at the auction, there it was.  Just sitting there with a starting bid of $1.  I thew my bid down and sure enough I won it for that low, low amount.  I'm looking forward to trying this game out as well. 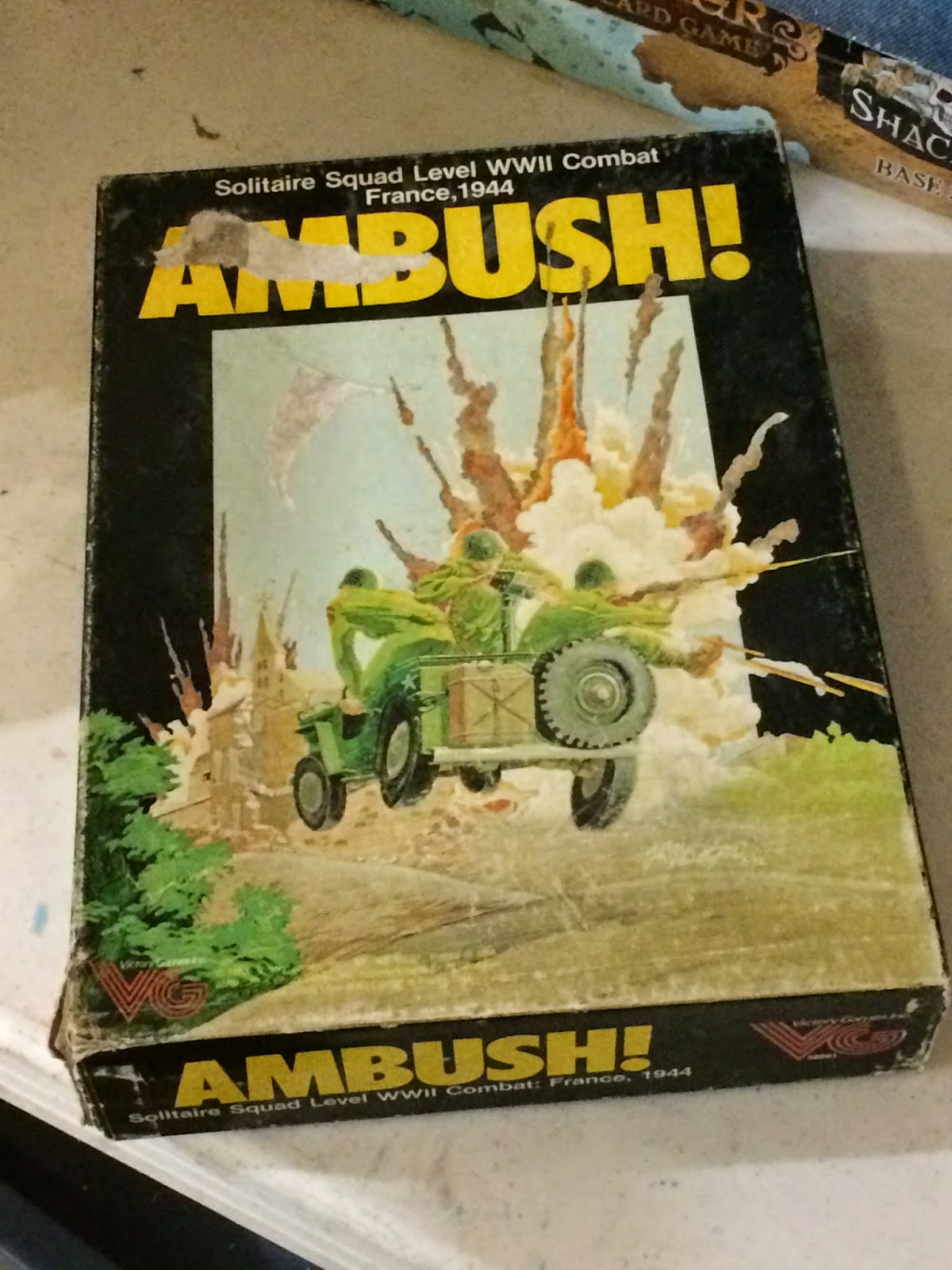 All in all I say it was a good day of acquiring new gaming material.  I got all these games for the price of Ambush! alone.  I was even in the market for 2 of the games that I found.

I'll try to post some review/reports of these when I get a chance to play them.
Posted by sean gewecke at 9:15 AM No comments: