I've painted up my German S-Boats for Cruel Seas.  This is a World War 2 naval war game focused on small craft published by Warlord Games.

These ships are nicely detailed and look very nice when painted up.


I decided to go with a simple paint scheme instead of some of the camo patterns I've seen others use.  Simple paint schemes allow me to get models completed quickly and still look nice on the table. 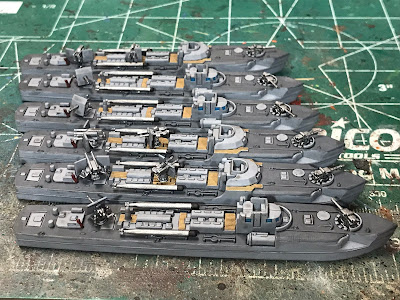 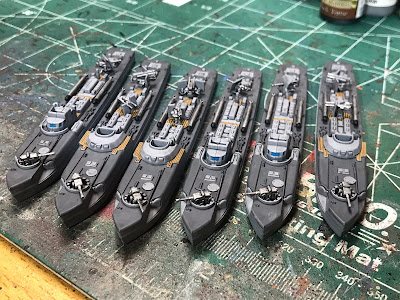 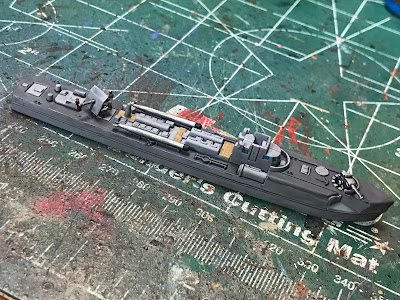 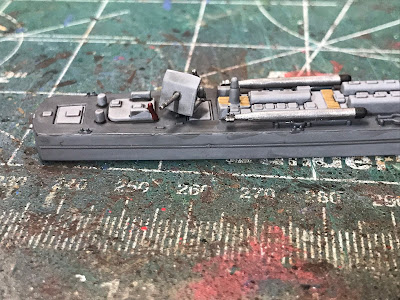 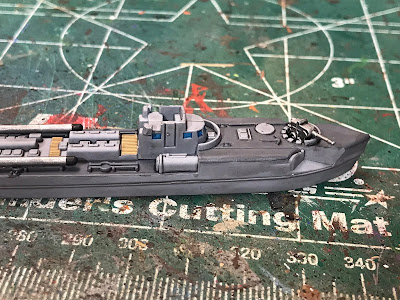 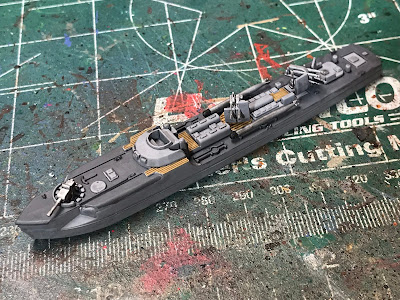 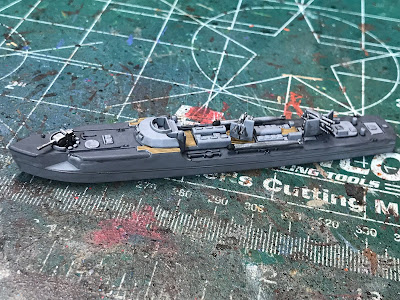 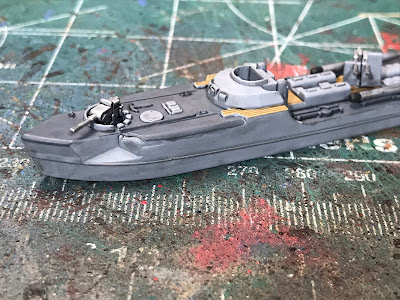 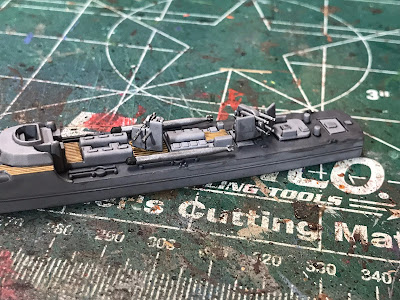 I've painted 6 S-boats and these will be the core of my fleet.  Next I'm going to be adding some larger ships.  I've got some cargo ships and a couple Fairmiles to paint.
Posted by sean gewecke at 10:01 AM No comments:

Next up, I'm going to show you how I go about assembling the German S-Boats for Cruel Seas from Warlord Games.  You can watch the video here.


Below is a step by step guide showing how I built these ships.  I am going to paint the ship before I glue the weapons on, but you can follow this guide to build the ship whether you paint first or not.

First, I printed out a parts list for the model sprue.  I trimmed all the pieces off and placed them on the sheet to keep them organized.


First, I'm building the S-38.  I took the cabin parts (pieces 11 and 12) and glue them together and then attach them to the hull. Next, I put the 2cm flak cannon (piece 4) at the front of the boat. 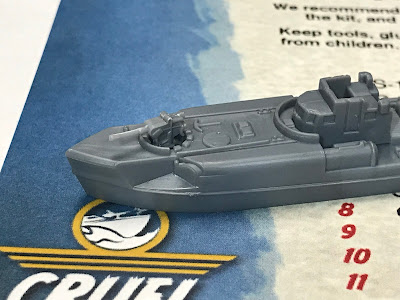 Next, the 3.7cm flak cannon (pieces 5 and 7) needs to be assembled.  I used a needle to apply the glue so that I can make sure I only use a little glue and it goes where I want it to go.  Then it is attached to the rear of the ship. 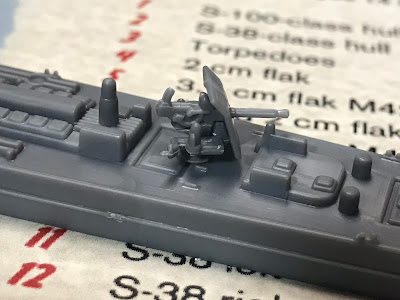 I didn't get a picture of it, but last up is placing the torpedoes on the ship.  One goes on each side and I placed them in the rear torpedo track on each side. 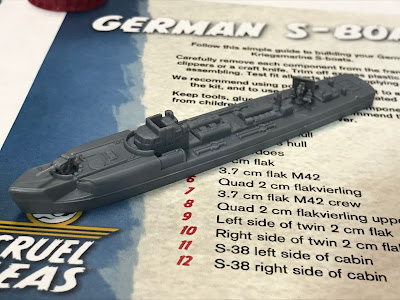 Next, I'm going to build the S-100.  This one doesn't have a separate cabin so I start by attaching the 2cm flak cannon (piece 4) at the front of the ship. 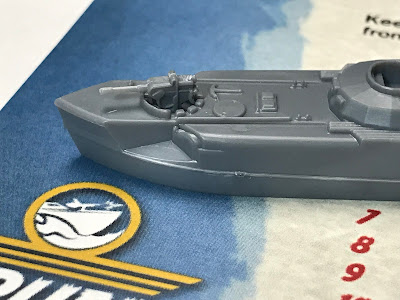 Next, the twin 2cm flak cannon (pieces 9 and 10) is assembled.  A small dab of glue needs to be applied to the pieces and then they are held together for them to dry.  Once dry the gun is dry, it can be attached at the center of the ship. 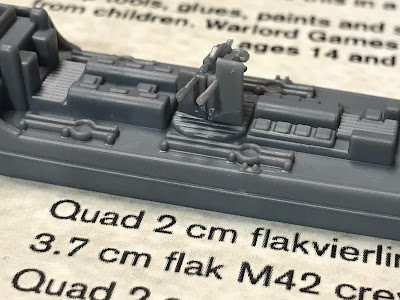 Next, the quad 2cm flak cannon (pieces 6 and 8) needs to be assembled.  Piece 8 has a peg that fits into the lower half.  I trimmed the peg down a little so that it fits better into piece 6.  Don't trim the entire peg off because it will help to line up the two pieces. 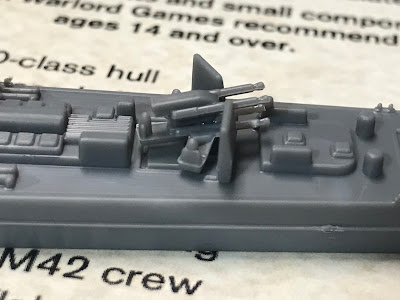 Finally, the torpedoes need to be attached, one to each side of the boat.  I put them on the rear track on each side. 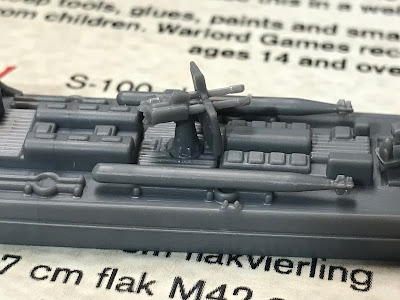 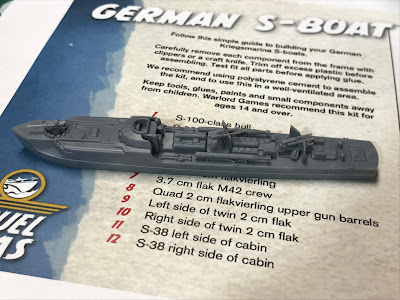 Some of the weapons are a little fiddly to assemble, but a little trimming should make them easier to put together.

I think these models are nicely detailed and will look great once painted.
Posted by sean gewecke at 9:52 AM No comments:

The ships are nicely detailed and a simple paint job looks very nice on them, in my humble opinion.

A limited color pallet and a little time and anyone can paint these ships to a nice tabletop standard. 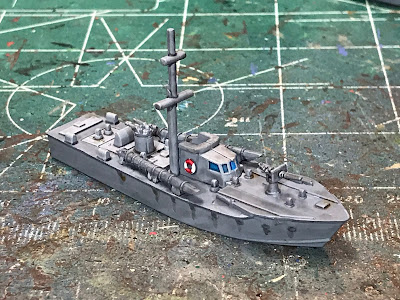 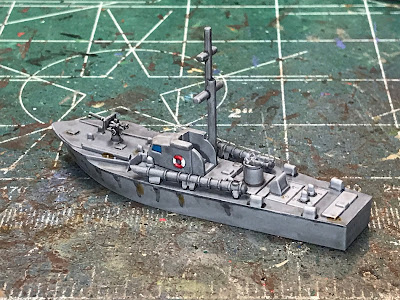 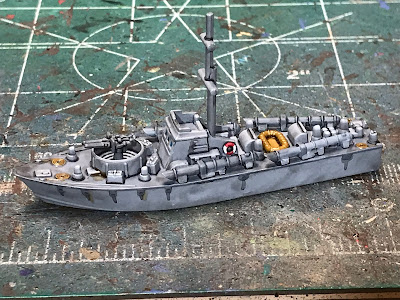 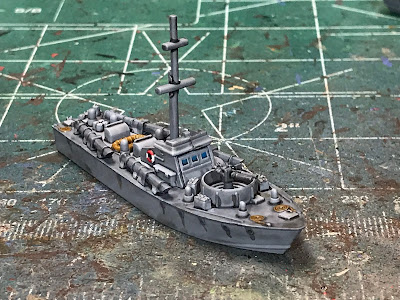 I've got 4 MTBs painted and will have more soon.  Next I will be working on the German counterparts.
Posted by sean gewecke at 6:58 AM No comments: