I got the Star Wars: Imperial Assault board game a few weeks ago.  I've played a couple of games so far and am very impressed with the game.  I really like the mechanics for campaigns and have started two with different groups.

I've decided I want to paint the miniatures.  The first one to hit the paint table was one of the probe droids.  I like these models and I think the paint job turned out well. 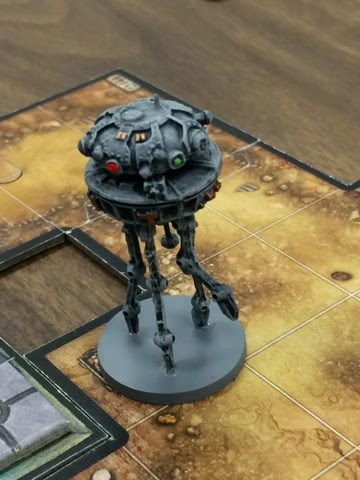 Pretty basic paint job here.  Based the model black and then dry brushed a dark grey and then a light grey.  Picked out a few details for a little color and I'm done.  I painted the base grey, but will probably do something more at some point. 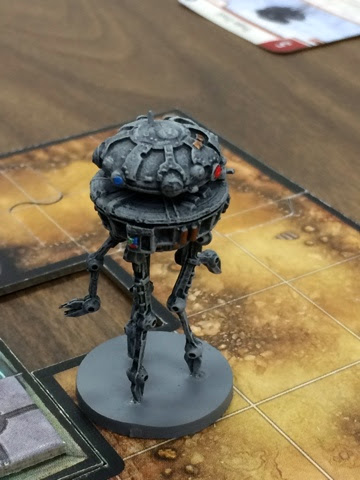 The game has exterior and interior tiles so I'm not sure what to do.  I will probably go with a gravel base with bits of greenery.

Your thoughts on the basing would be appreciated.
Posted by sean gewecke at 3:20 PM 2 comments:

I have finished painting the models I set for my goal for January.

It is good to achieve a goal and signing up for the Tale of an Epic Gamer is what kept me motivated to keep pushing through.  Next month I will be working on a Biel-tan Eldar force.  I'll post my February goals later.

I'd love to hear your feedback on these guys.  How do they look indiviually (less important to me)?  And how do they look together (always my greatest concern).
Posted by sean gewecke at 6:42 AM No comments:

After getting a bit of feedback on the Goff Gutrippa I have added a bit of color.  I painted the turret and claws red and then washed the areas with GW agrax earthshade. 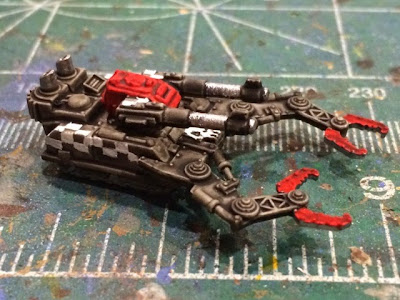 This makes a huge difference and I like the results.

What do you all think?
Posted by sean gewecke at 6:18 AM No comments:

I've made some good progress this month.  I've finished the Nobz and Gretchin.


The boyz and Bonebreakas are nearly finished.  When I get them finished I will post pictures.


I had a little spare time and did a test model for a future detachment.  The core of my army is going to be Bad Moon, but I want to have a few other clans represented as well.  Here is my first attempt at painting a Goff Gutrippa.  I'm please with the results, but would love to hear your thoughts.  I wonder if it needs more color?

This model was primed white and then I applied two coats of GW's Nuln Oil.  I hand painted the checkerboard pattern (which was a pain) and added a bit of silver on the claws, tracks and gun barrels.

Your comments, suggestions, and thoughts would be appreciated. 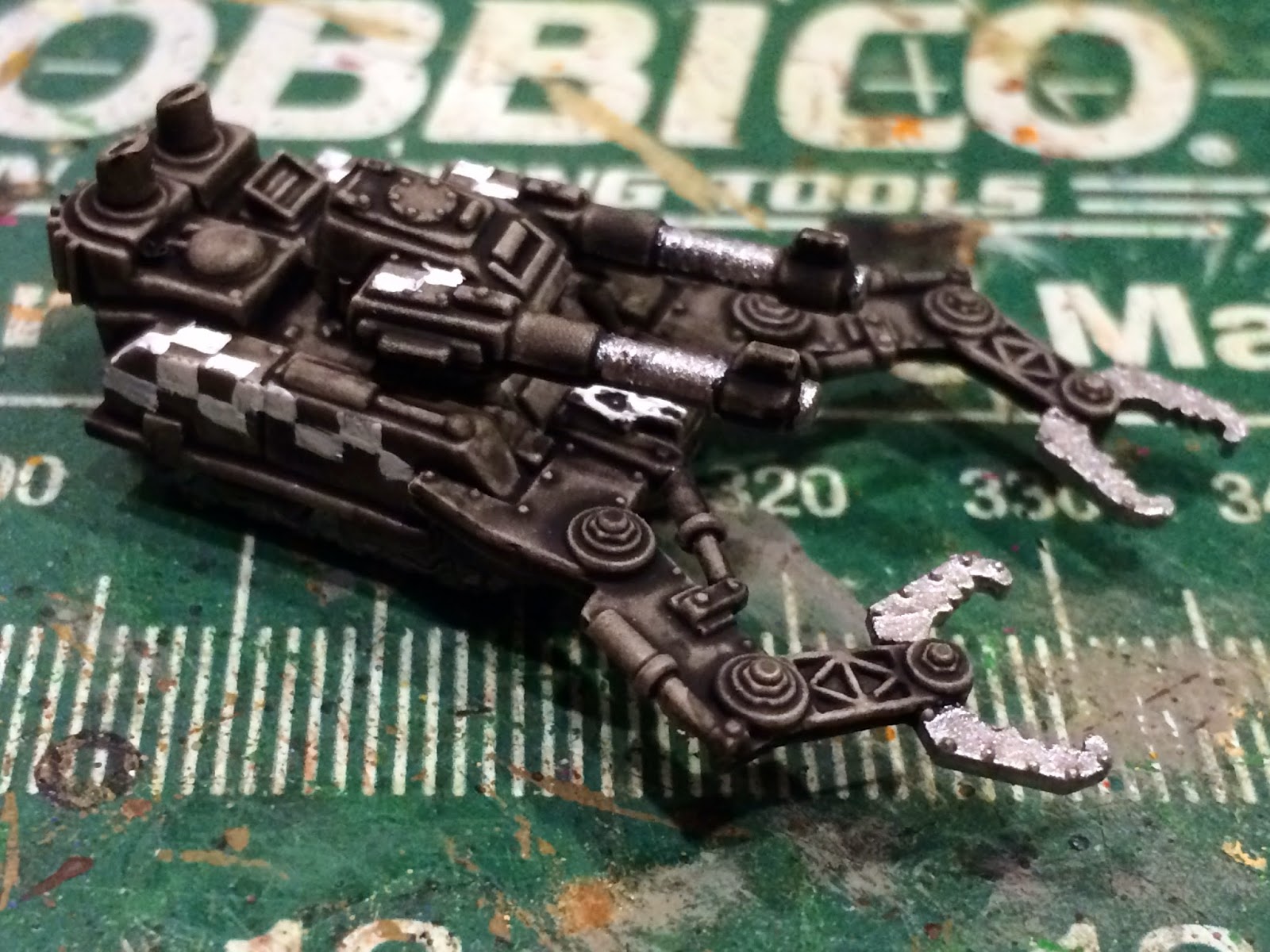 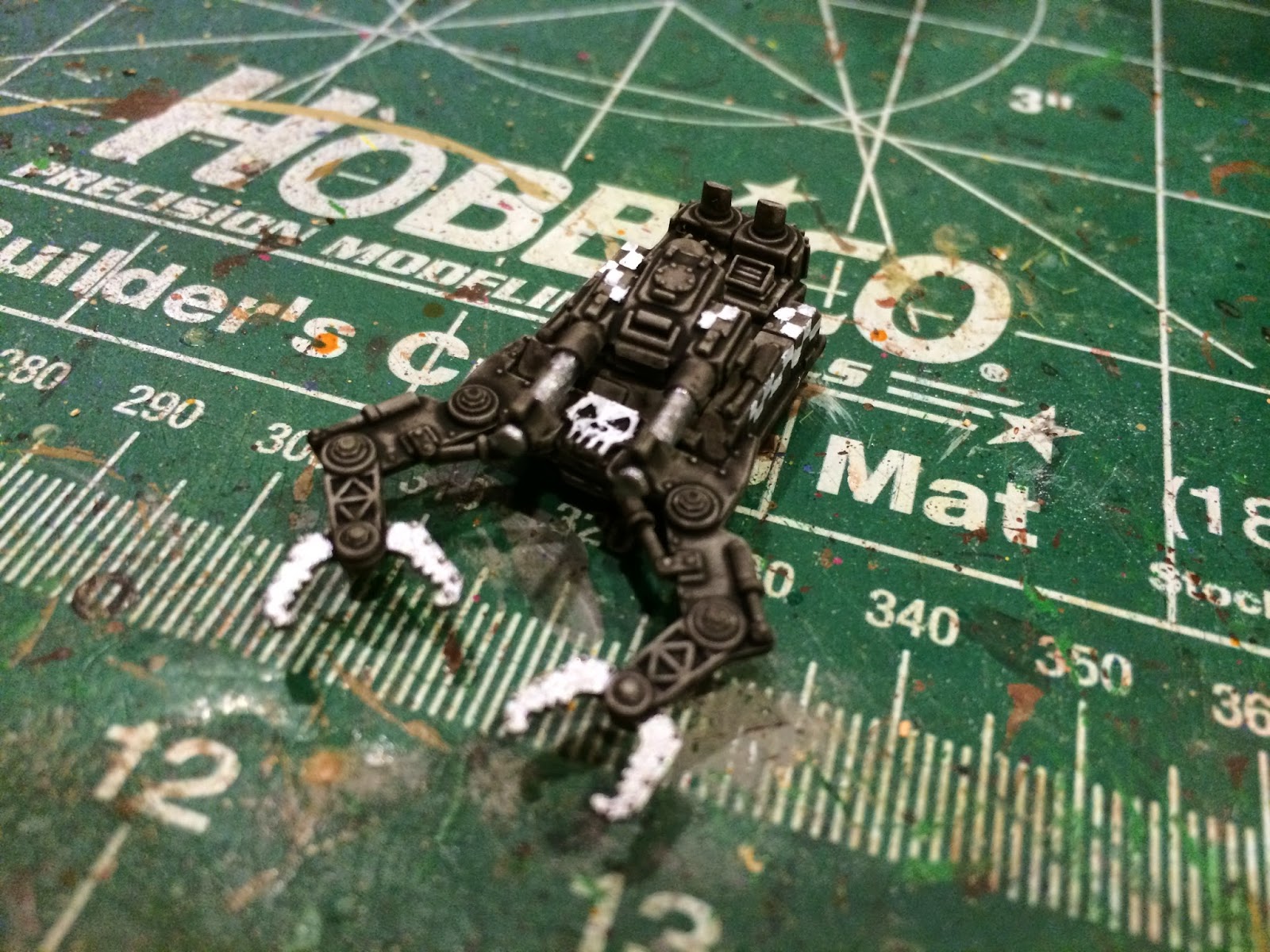 Posted by sean gewecke at 7:33 AM No comments:

It looks like I'm going to make 2015 an Epic year for gaming.  What that means is that I have signed up for Tactical Command's Tale of an Epic Gamer painting project.  The goal is to make lots of progress on painting your 6mm Epic 40k army (or any 6mm force).  You are encouraged to post what progress you've made each month and share it on their forum.

Most people work on one army for the whole year.  There are truly some impressive armies showcased there.  Many of them have provided inspiration for me, but my talents aren't quite as developed as many of the others that have posted their armies over the years.

I am working on armies to share with my gaming group so my approach is going to be a bit different.  My goal is to complete 2,000 point armies of four different Epic 40k races.  I will be doing Orks, Eldar, Imperial Guard, and Tyranids.  This will allow me to have different armies to teach others how to play and maybe get a couple of people interested enough to actually play some games with me.

My goal for January is to paint up a detachment of Ork infantry and some Bonebreakas.  The infantry detachment will include 18 bases of Ork Boyz, 8 bases of Gretchin, and 6 bases of Nobz.

Here are a few pictures of the work in progress so far. 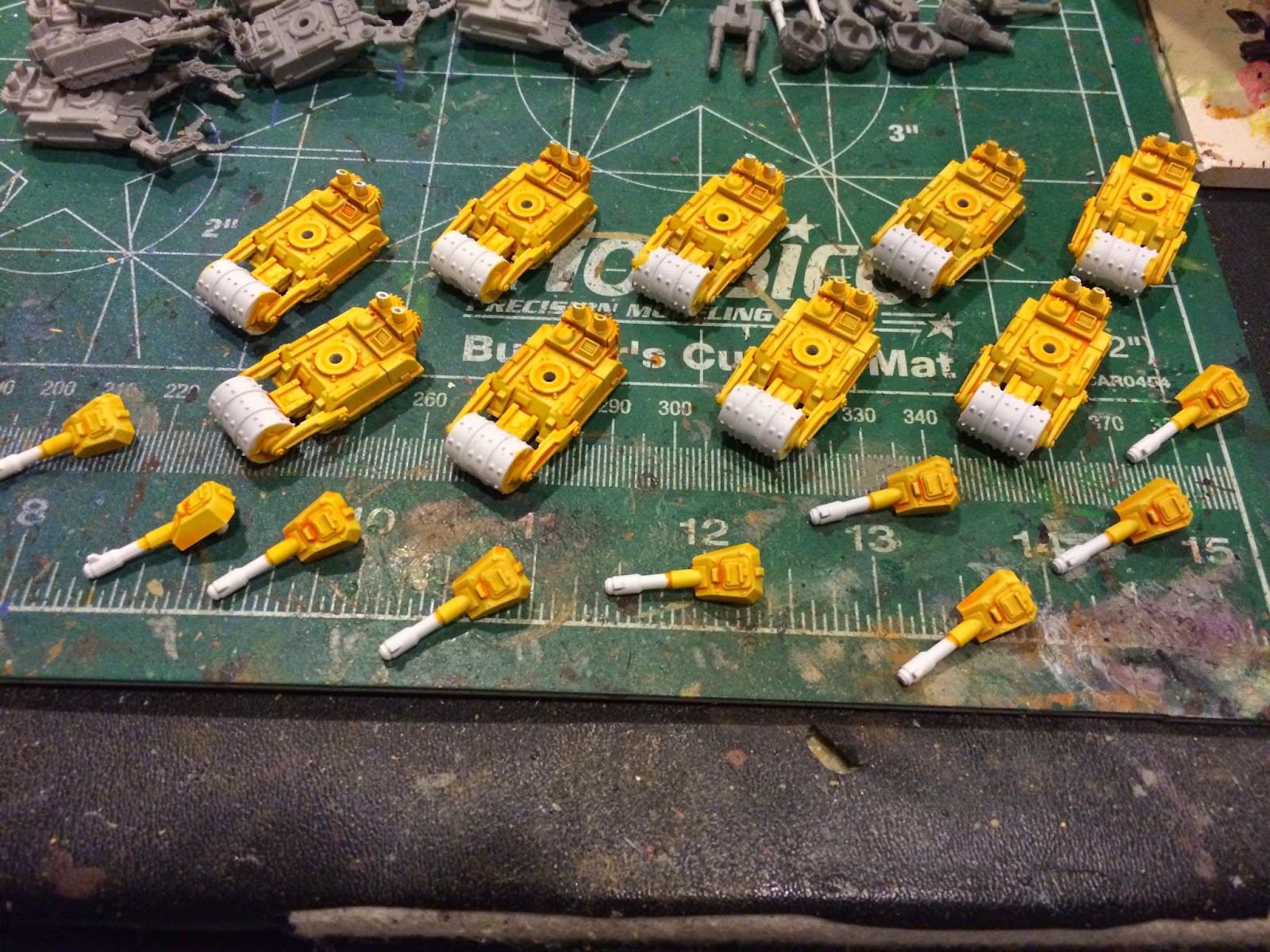 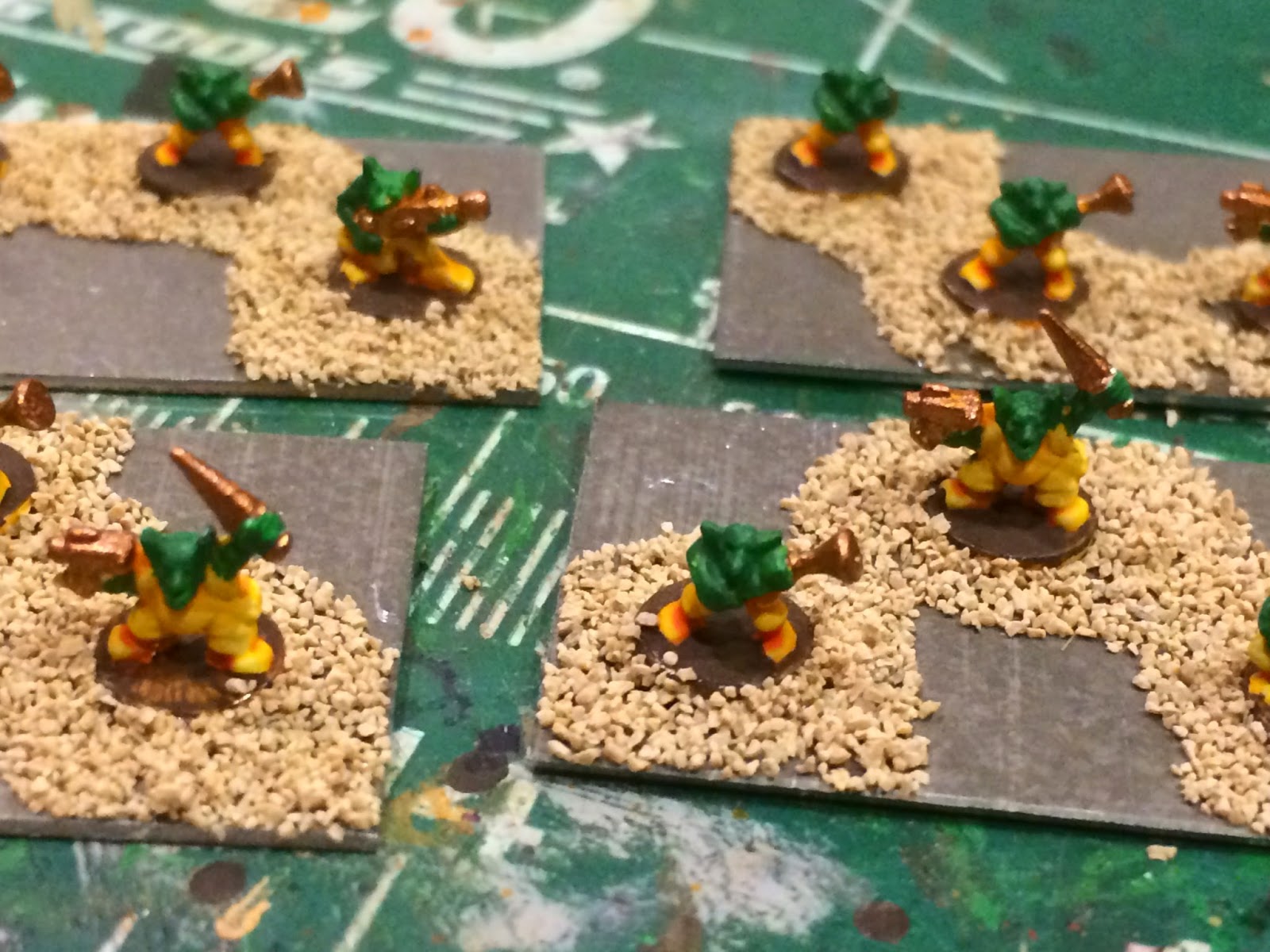 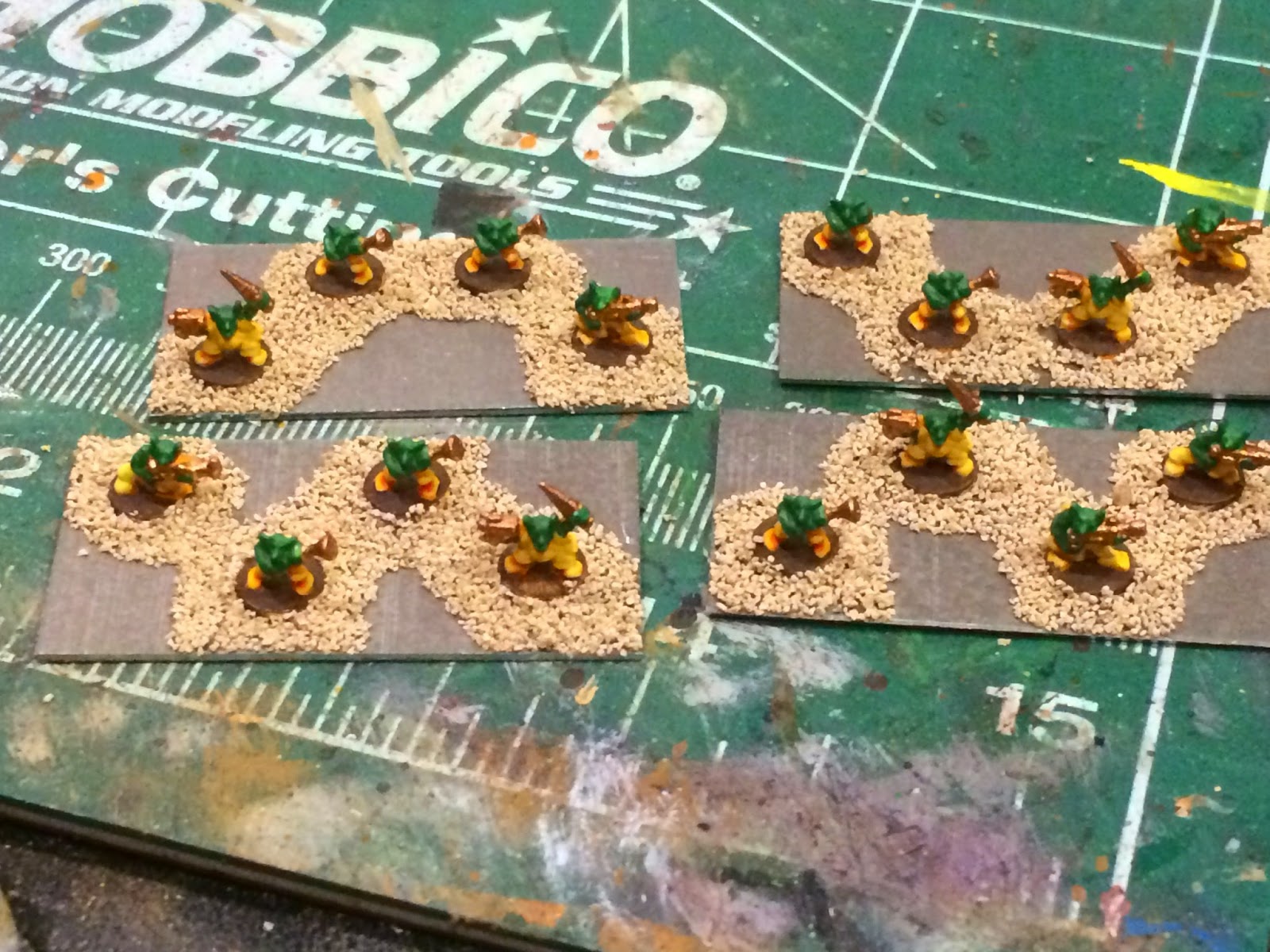 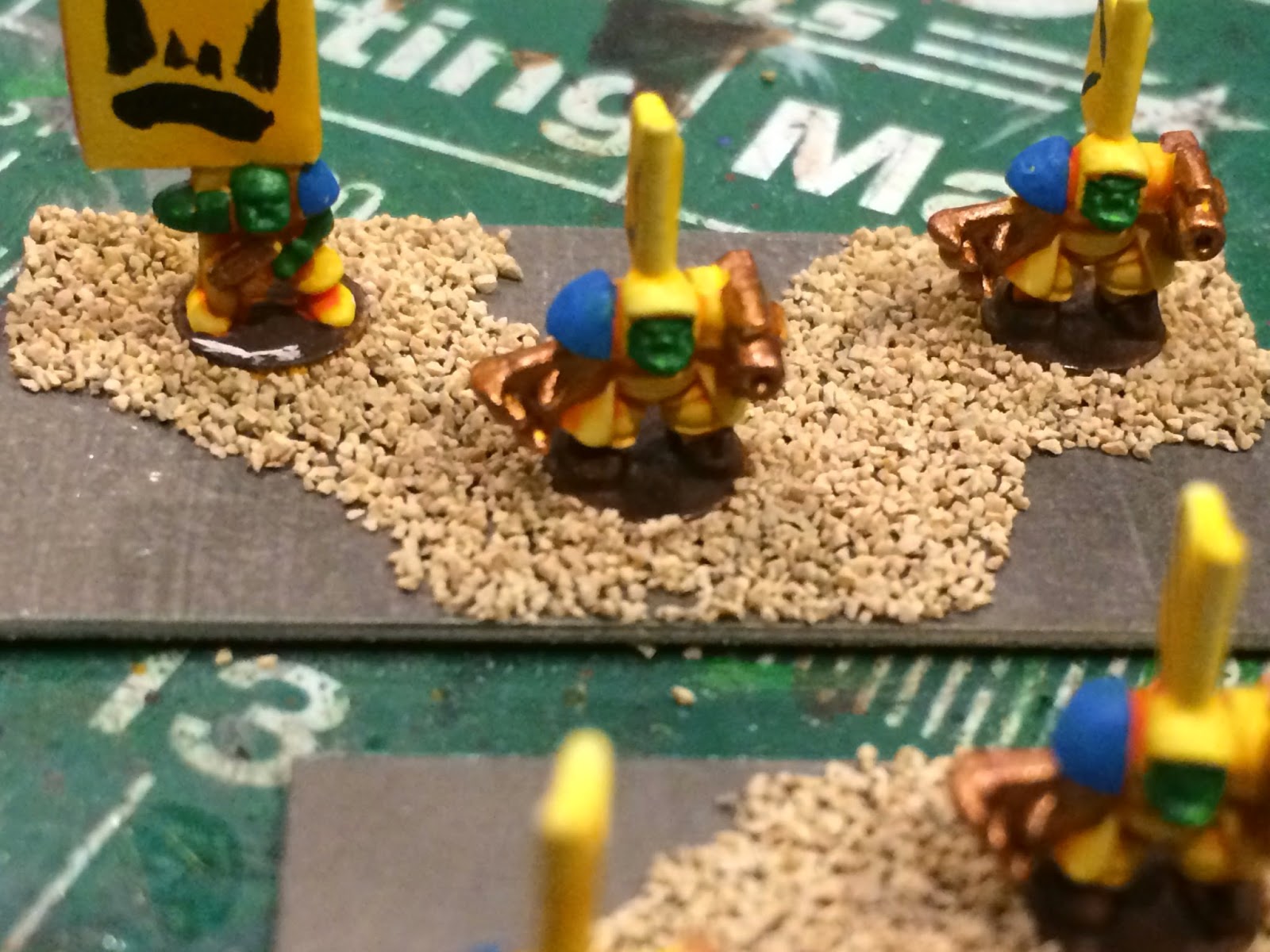 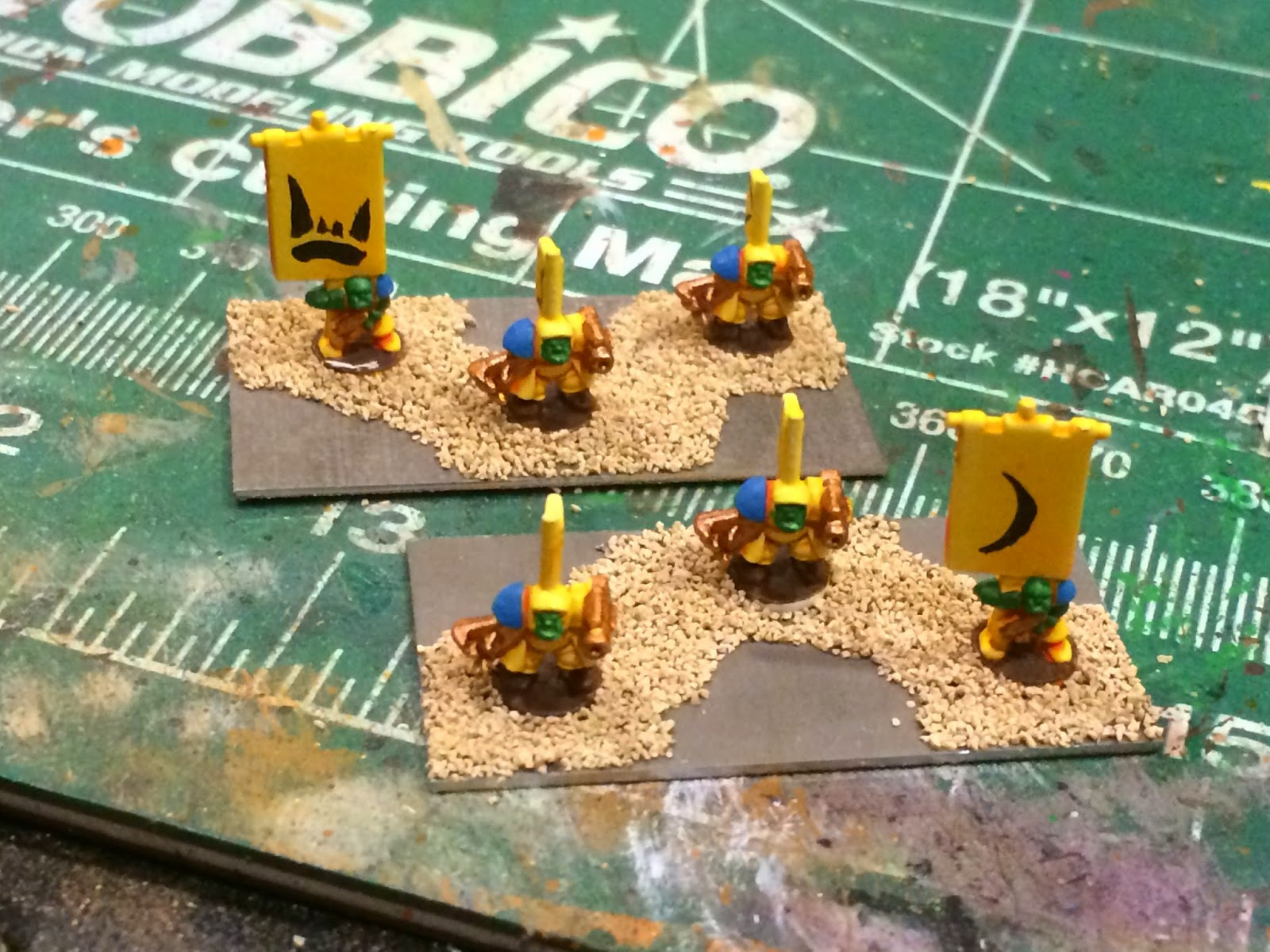 I've made good progress over the holidays.  Next up is painting the bases of the infantry and painting the guns and tracks of the Bonebreakas.

As you can see these models are very small.  I don't plan to add quite the level of detail that others do for this scale.  My normal goal is to set the models on the table, take a step back, and view them from there.  I think these look good like that and will continue with that as my benchmark.

I'll keep you posted as I make progress.
Posted by sean gewecke at 6:38 AM 4 comments:

My friend Bill was nice enough to set up a game of G.A.S.L.I.G.H.T. (Glorious Adventures in Science Loosely Involving General Historical Times) for us to play.  It was set in the Sudan.  A British colonial force was defending a fortified city against an attack by a Fuzzy Wuzzy horde.  The Fuzzy's had two boats mounting a couple of cannons and several ships that were bringing more troops across the river and into the assault.

The British were not expecting an attack so weren't able to respond right away.  First they had to raise the alarm and then the defenders would start pouring out of the buildings.

The Fuzzy's goal was to get to the Mosque and retrieve a religious idol and to kill as many defenders as they could.  The British were trying to defend the city and the civilian population. 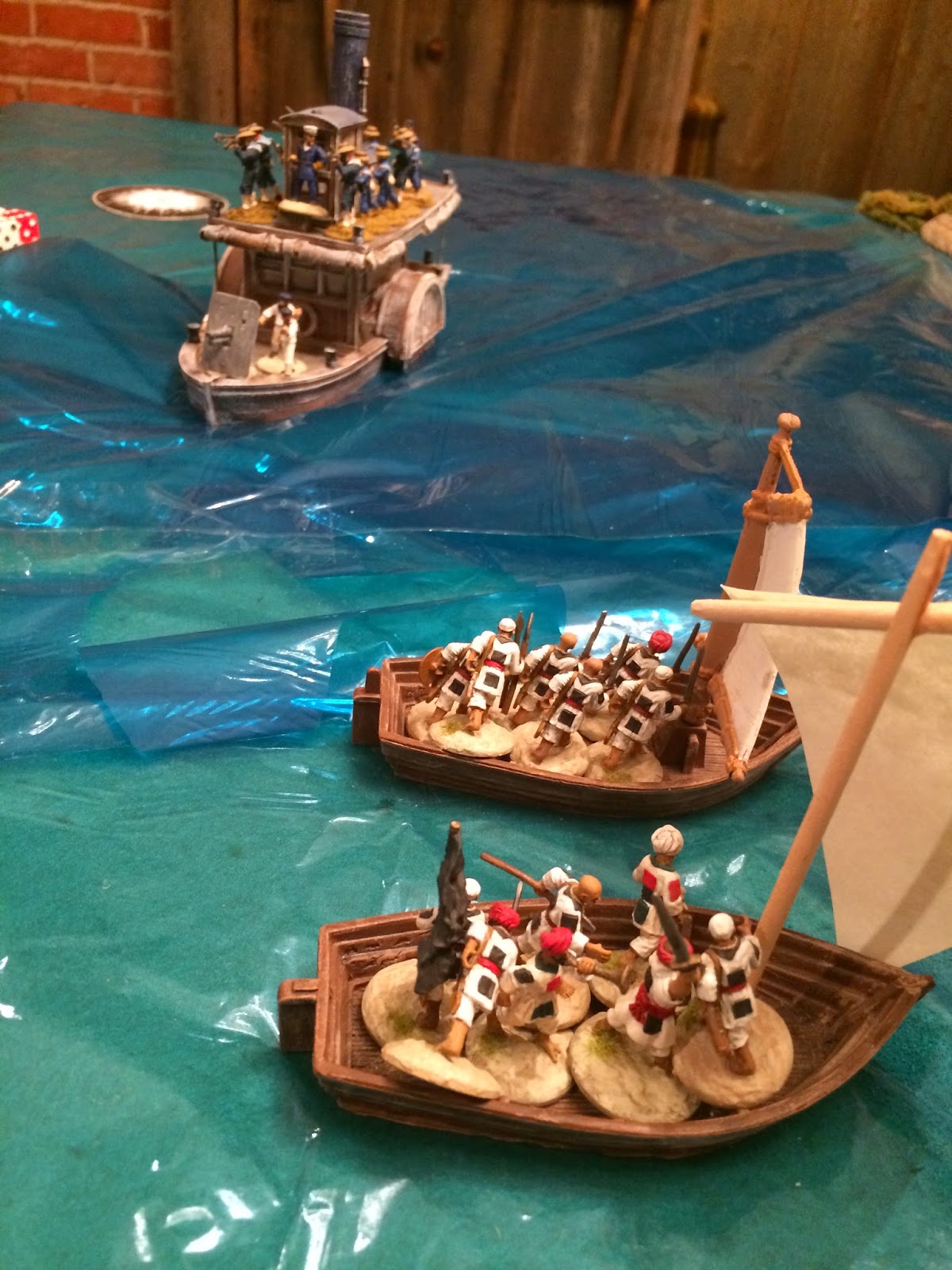 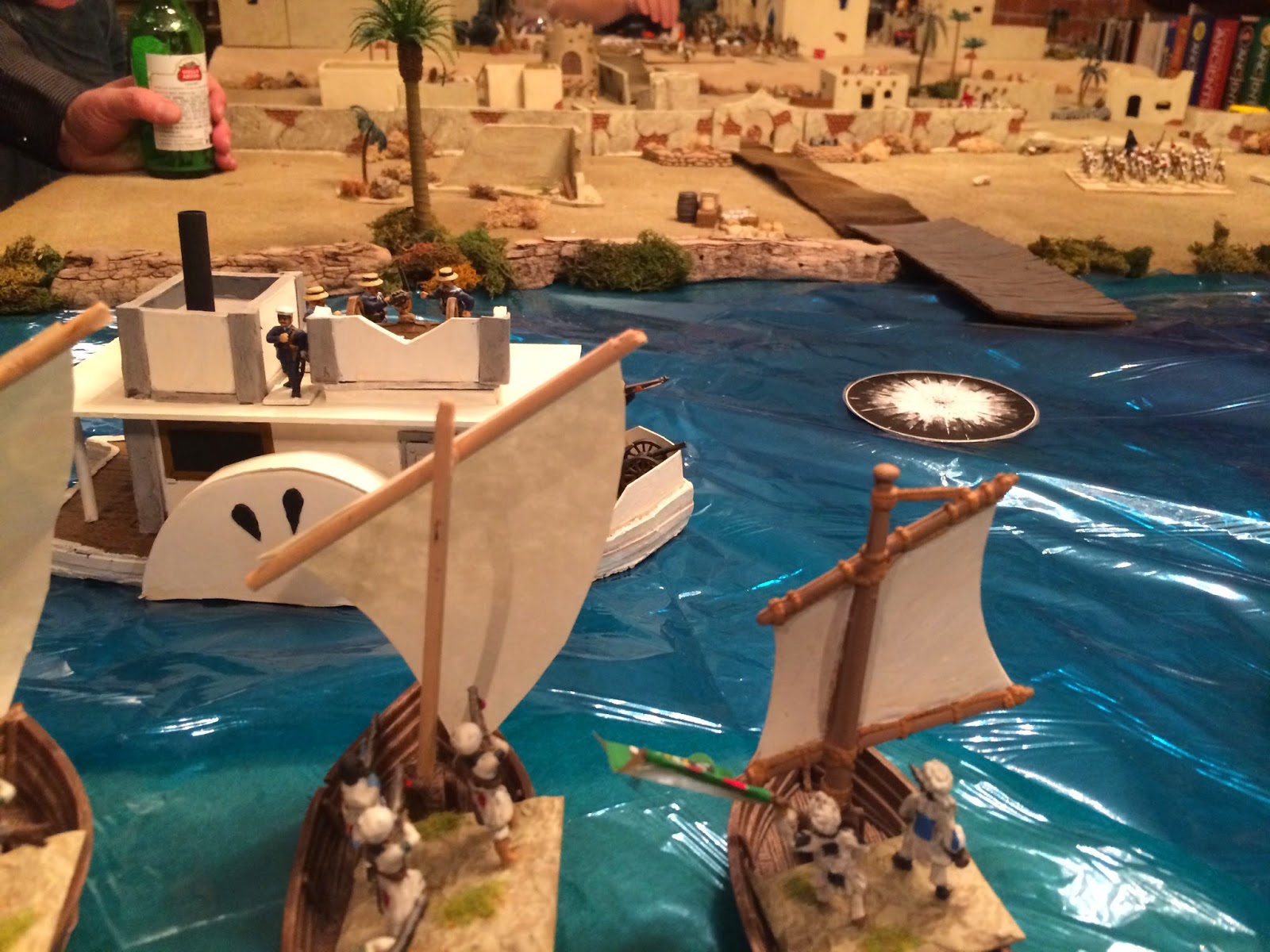 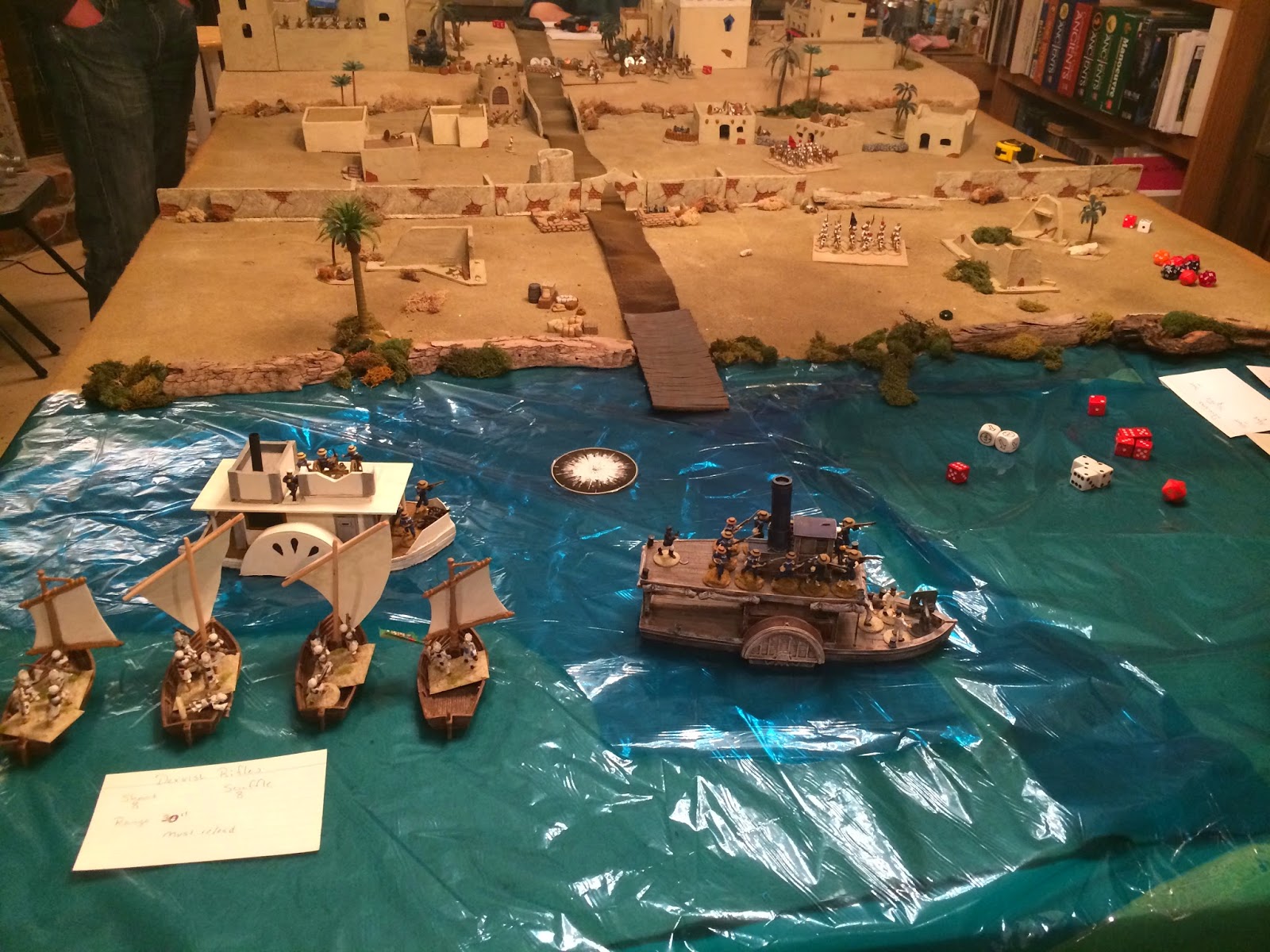 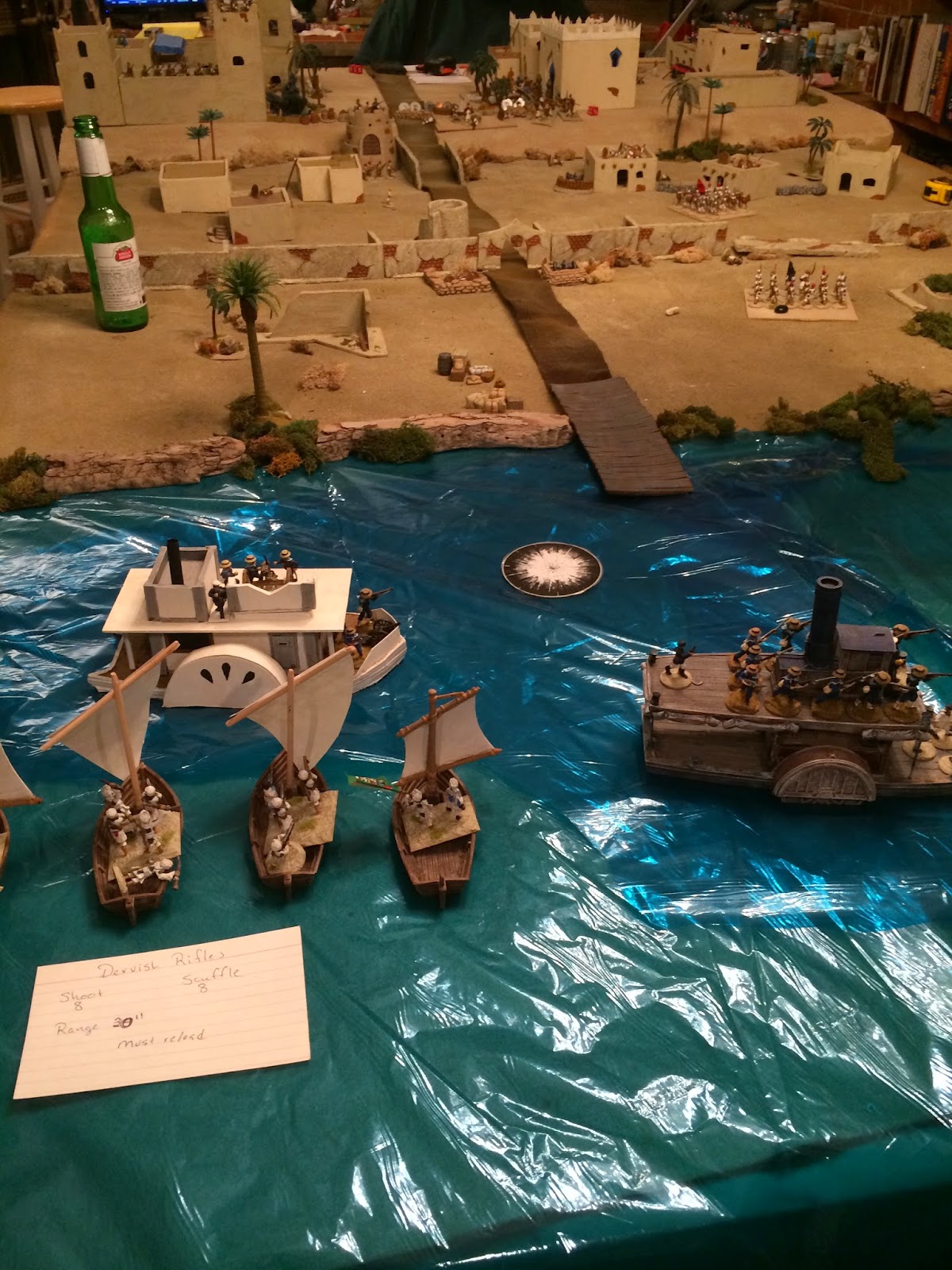 The game was tons of fun and the table was beautiful.  Thanks to Bill for putting the game together and Thanks to Randy, Viking Mike and Gene for playing.
Posted by sean gewecke at 7:48 AM 2 comments: