Xia: Embers of a Forsaken Star by Far Off Games - Unboxing

Another game arrived that I backed via Kickstarter.  Xia: Embers of a Forsaken Star is an expansion for Xia: Legends of a Drift System.

This expansion added more missions, titles, ships, and events.  In addition, it includes a solo option.  The solo option is what sold me on backing this and I'm pretty excited in giving this game a try.

The components all look very nice and are high quality. 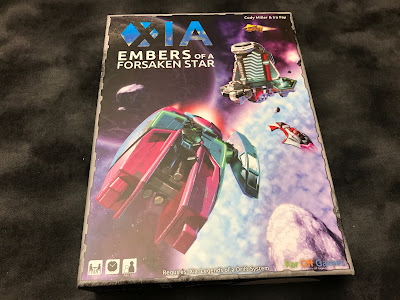 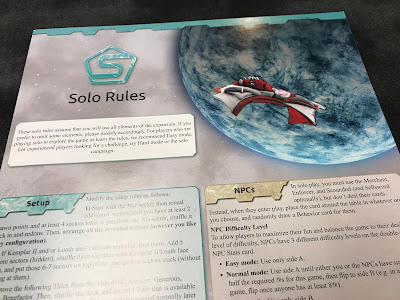 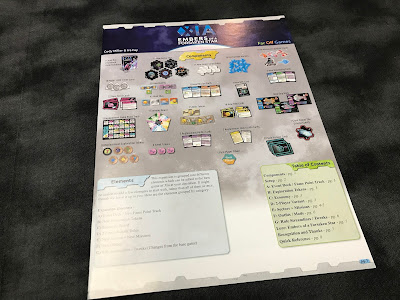 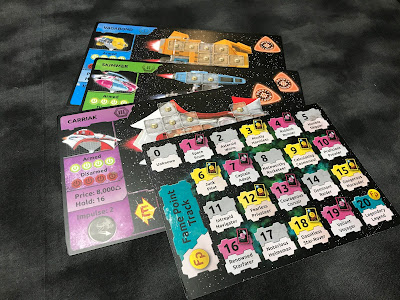 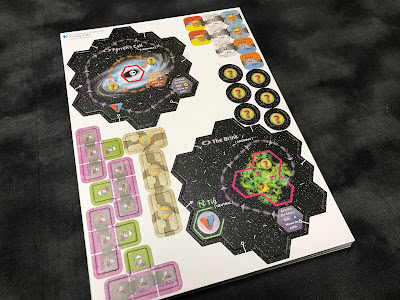 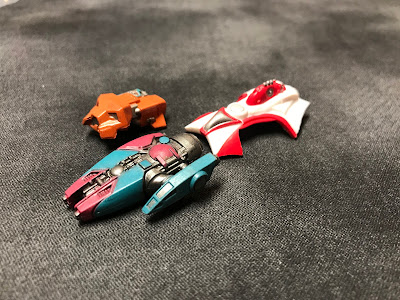 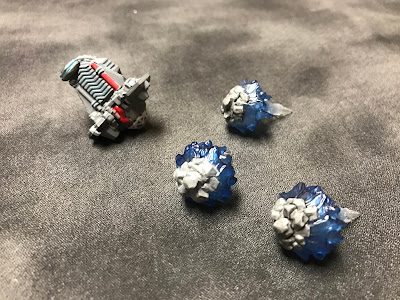 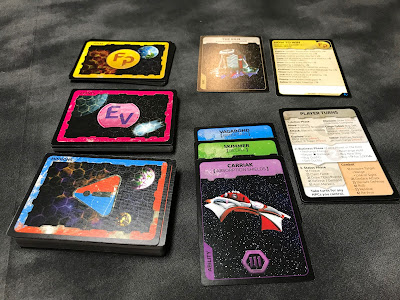 This game has some pretty cool visuals and I hope to get this on my table soon.  There are several games that claim to be sandbox, but most don't really fulfill that promise.  However, from what I've read and watched from others, this game really does give that sandbox feel (with certain limitations) and offers several paths to victory.

Posted by sean gewecke at 7:55 AM No comments:

I have added some new models to my 6mm Cold War US forces.  This time I've painted some M60A3 tanks.  These came from CinC.

I've used the same paint job on these as the rest of my US forces.  It is a simple paint scheme, but I like the way they look. 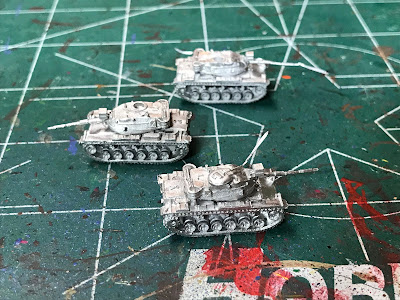 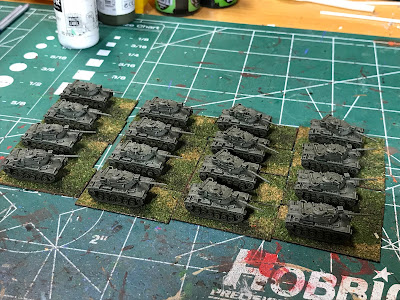 I based these models on 40mm x 20mm metal bases.  I flocked these bases with a mix of 3 flocks.  I like the effect this gives. 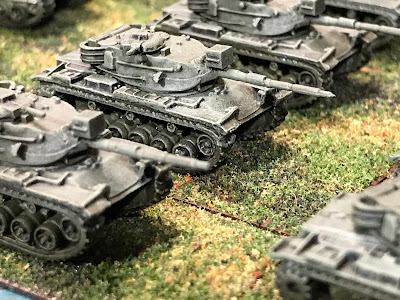 This War of Mine by Awaken Realms - Unboxing

I received my copy of This War of Mine (another game I backed on Kickstarter) last week.  I often like to see what is in a game before I buy it so I thought I would make an unboxing video to show off the goodies.


In This War of Mine you play as a group of civilians trapped in a besieged and conflict-ridden city, enduring many hardships that often test the essence of humanity.

During the day you take shelter in a ruined tenement, which you need to maintain, search, and add improvements to.

During the night, you will guard your shelter and possessions and explore other locations to find various supplies.  You will meet different characters; some good and some not so good.

Your goal is to survive until the hostilities end.


This game has a pretty dark theme and is not going to be a light hearted experience.  It won't be for everyone, but I think it looks interesting and I look forward to playing this game. 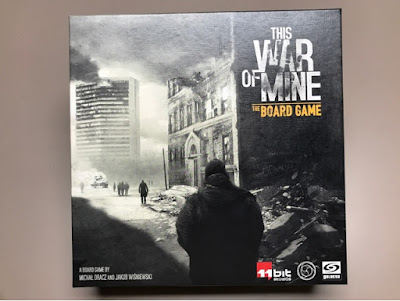 As far as the components go, most everything looks pretty good.  There are a lot of cards and they are of decent quality.  The tokens look nice.  I really like the look of the board. 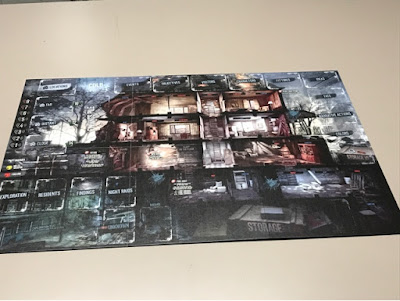 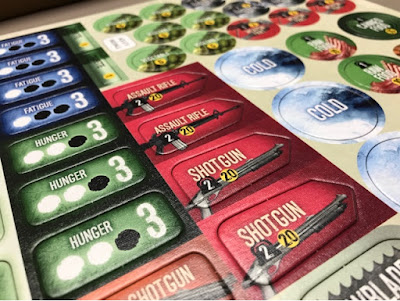 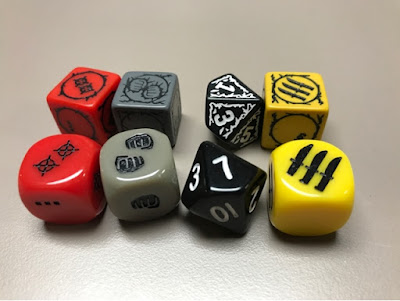 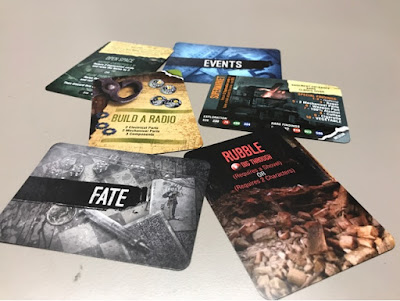 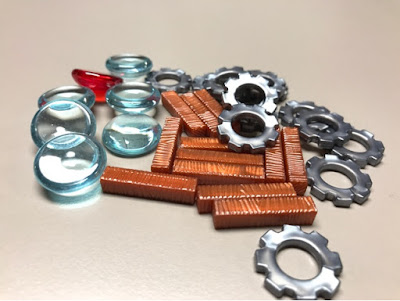 The art work throughout fits the theme very well and sets the tone for the game. 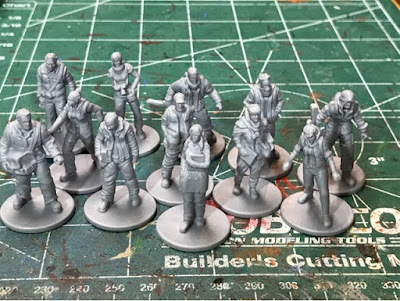 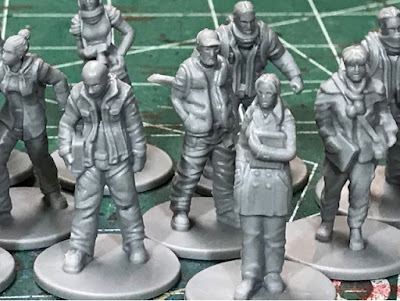 I'm not real impressed with the miniatures that come in the game though.  The are not as detailed as well as they could be.  Other than that though, all the components seem to be good quality and should add to the immersion of the game play.

I backed Gloom of Kilforth: A Fantasy Quest Game on Kickstarter and received my copy of the game last week.  I wanted to share with all of you the goodies that come in the box so have put together an unboxing video.


The land of Kilforth is a perilous domain filled with nefarious monsters, mysterious Strangers and treacherous Locations, and dominated at its centre by The Sprawl, a huge city where intrepid Heroes begin their journey to fame and fortune. Throughout the land various factions vie for power over each other, such as the supposedly noble Order of the Rose or the terrifying Doom Guard. And presiding over the world outside Kilforth is the ever-present Overlord, Masklaw. Over the coming month, a deadly Gloom will descend upon Kilforth,which the Heroes must Battle through to prove their worth, defeat an Ancient evil, and save the land from darkness.

Gloom of Kilforth is a card game of high fantasy with a Gothic edge, playable in 1-3 hours, where 1-4 players, working individually or together, must take their humble adventurers on a journey through a dark world of magic and peril. They will visit strange places, stranger people and overcome powerful enemies in their mission to discover mysterious artefacts and mystical Spells. Players follow their Hero’s tale from modest beginnings through an epic story to an exciting climactic battle for the fate of the world. Gloom of Kilforth takes about 45 minutes per player to play. 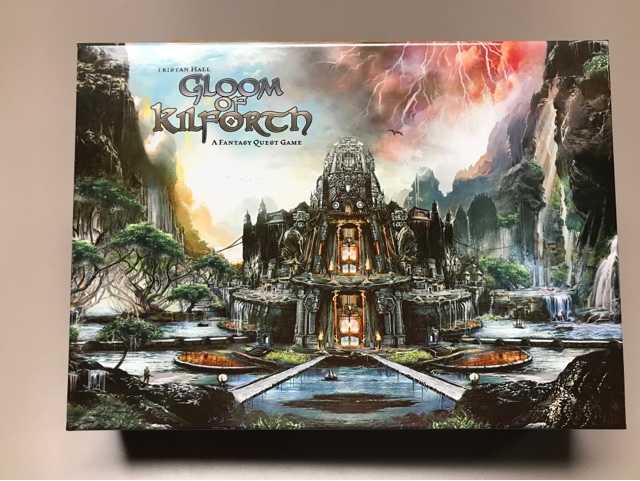 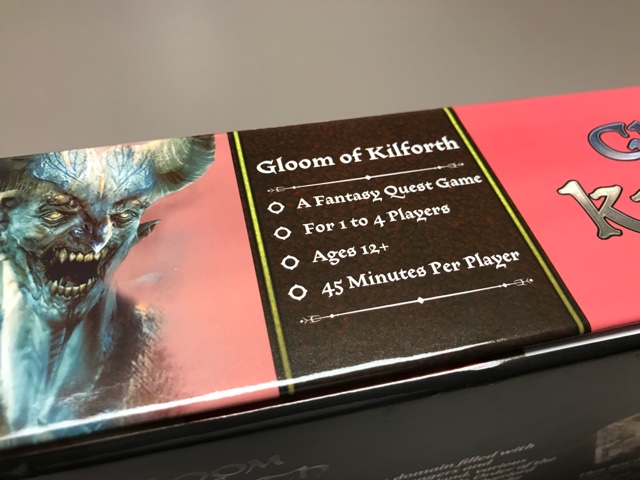 I've not yet read the rules so can't speak much about the game itself, but overall I'm pleased with the components except one minor gripe.

The artwork in this game is fantastic.  The box looks great and when you open it up and start to take a look at all the cards, it only gets better.  The amount of art is surprising and it all has a consistent feel to it.   The cards appear to be of good quality and should hold up to repeated play.  I will probably sleeve my copy of the game, but I do that with most card games, regardless of the card quality. 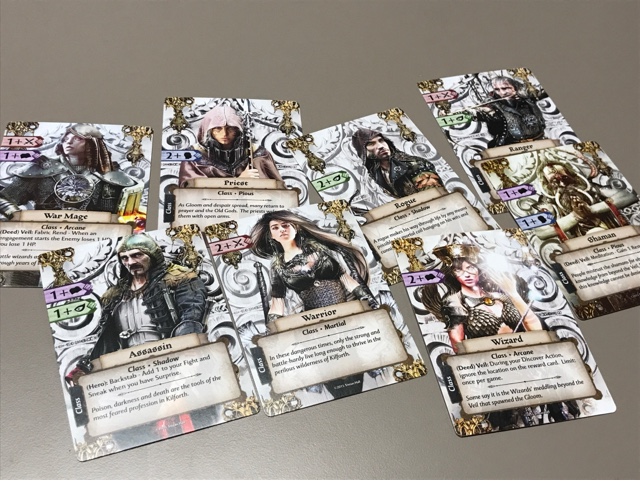 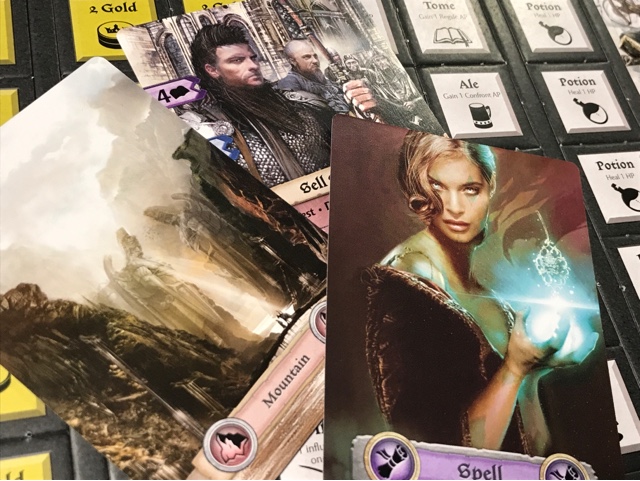 There are some wooden tokens included that look nice and functional.  Nothing special, but not bad either. 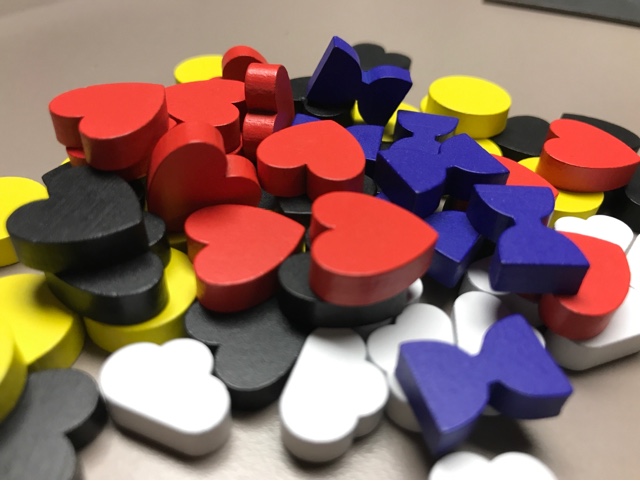 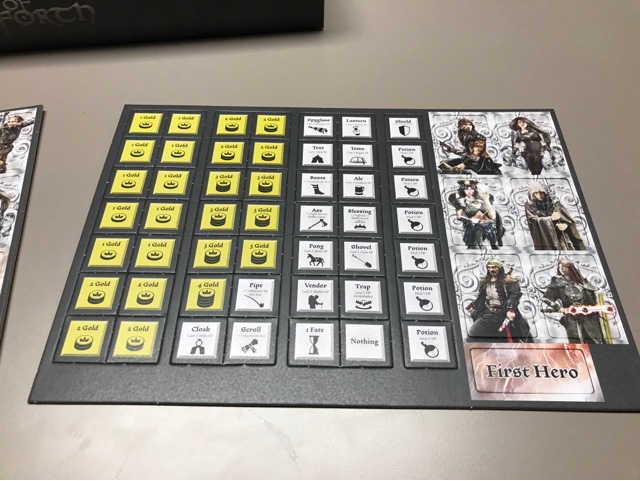 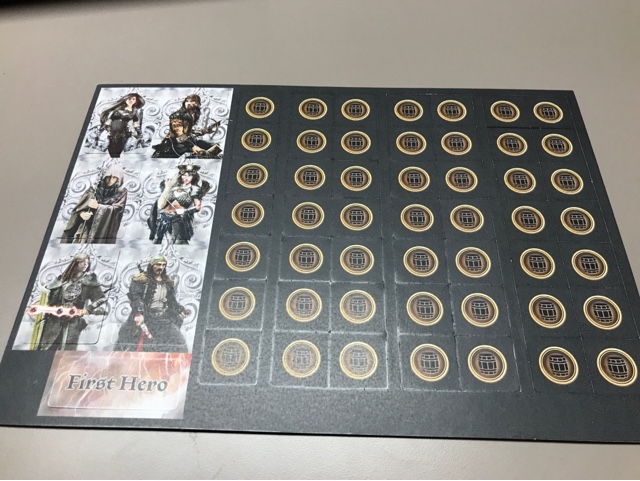 I look forward to playing this game and seeing how everything works together and I can't wait to get to see all the monsters, locations, spells, etc in use.
Posted by sean gewecke at 10:01 AM No comments:

Amy and I invited several friends over to play a game of Memoir in remembrance of the D-Day Landings 73 years ago.

I wanted to play with 4 maps, but my table isn't big enough for that so we only played 3 of the maps.  I set up the American maps; Omaha Beach, Utah Beach, and the American Airborne.  We had 3 players per side and had a great time with the game.

It took us about 3.5 hours to complete the game (not counting a break for dinner) so I've set the video to play quickly.

The Axis forces start with some bonus points at the beginning of the game so the Allied players have a bit of challenge ahead of them.  However, if the allied player can get a foothold, then they start to take points away from the Axis and the game can swing either way.

In the end, the Axis almost won, but couldn't get the last few victory points before the Allied forces pulled out the 37 points needed for victory.

I do enjoy the big map games and should try to organize these more often with my gaming group.  If you get a chance, I encourage you to play some of these scenarios.  They add a new level to your Memoir '44 games and are a great experience.

Sorry I didn't get any pictures of the game in process.  I was to busy dealing with the American Airborne troops in my section of the game.  Yikes they are scary.
Posted by sean gewecke at 10:57 AM 2 comments:

I thought I would write a quick update on my 6 x 6 Game Challenge and share a few thought on the experience so far.

To start let me say that I am surprised by how seldom I replay games over a short period of time.  I know that my gaming tends to wander around a bit and I go from one game to another pretty quickly, but I never really noticed the level of wandering until I tried to play a game 6 times before.

To be fair, I've decided to make videos of my plays for this challenge and I've had some camera issues that didn't record certain plays correctly, I've played a game here and there to refresh or learn the rules before taking video of the next play, and I needed to paint a few models here and there so that I have what I need to play some of the games.  So I have played a couple games a few times that aren't counting toward the challenge and haven't started some because I still need to get more models painted.

I am enjoying playing the games that I have so far and look forward to more games of the ones I've already started as well as playing the other games on my list that I have yet to tackle.

Playing these games multiple times does allow for a better story to develop and a better understanding of game mechanics.  It also allows you to build up tactics and strategies that you might not have tried when you only play a game once a year.

On a side note, I've had a few friends either watch my videos or hear about this project and reach out to me to see if they can join in on one of the games I'm playing.

Overall, I'm happy I signed up for this challenge and have enjoyed the experience.  I still have a lot of games yet to play in the next 7 months.  I can't wait.

My plan was to play 3 games each month toward this challenge and that would fulfill the 36 games I needed to play by the end of the year.

I'm a little behind with only 11 games played at the end of 5 months, but I will try to get back on track in the next month or two.

You can click on the links under each game to see the post about each game session played so far.

The Walking Dead: All Out War