It has taken me a little bit to get this AAR report put together, but I guess it is better late than never.

I played another game of LaserStorm.  This time I used the Eldar and Space Marine stats that I put together using the unit creation rules.

I used a variant on the Introductory scenario.  The forces were not identical and I used 3 objectives instead of 2.  The first force to reach 6 victory points would be declared the winner.

I was in command of both forces, but promise to play each side to the best of my ability. 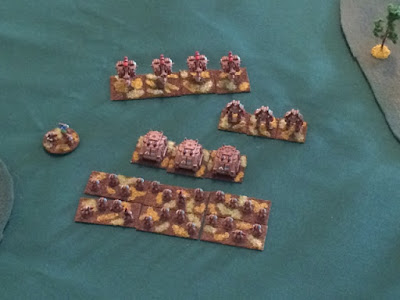 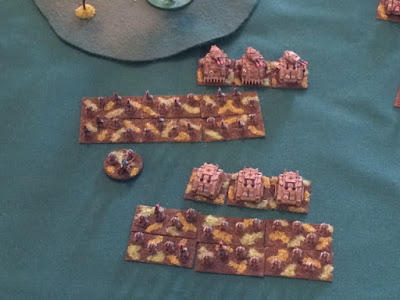 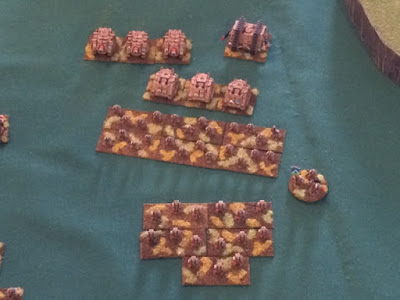 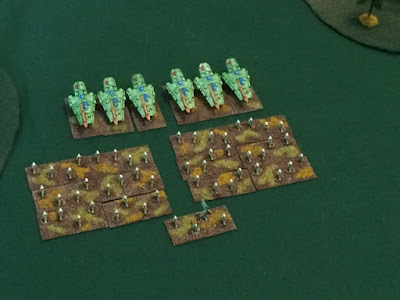 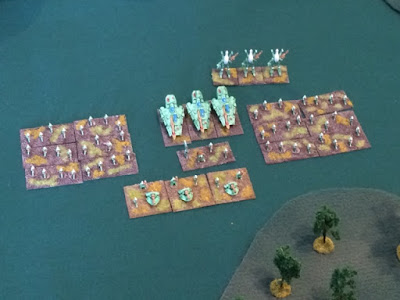 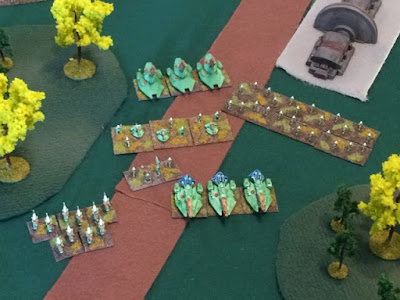 Both sides set up in spread across the table. 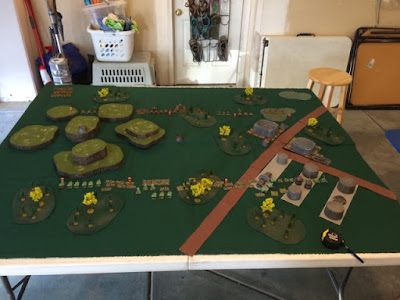 The Marines got a snap action right away and the Predators opened fire on a group of Falcons and scored 3 hits.  All three were destroyed. 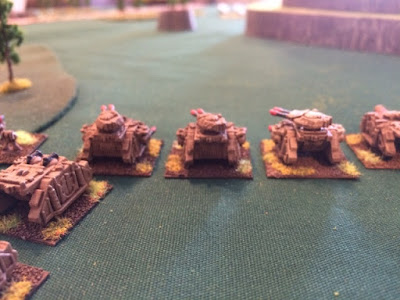 The Eldar on the City flank advanced.  Firestorms fired on the Land Speeders but failed to hit.  Fire Prism fire on the Land Raider and destroy it.

The Eldar Fire Prisms snap fire on the Vindicators and miss.

The Marines on the City flank advance.  The Rhinos move forward and the Tactical Squad disembarks while taking shots on the Guardians; killing 2 stands.  The Dreadnoughts fire on the Firestorms destroying 1.  They fail moral and are removed from the battlefield.  The Land Speeders fire on the Heavy Weapon platforms and kill 2.

Tactical Marines in the hills advance and disembark.  The Vindicators move forward and open fire on the Fire Prisms killing all 3.  The Terminators attempt to double and fail their moral and are put in reserve.

Marines in the Center also advance.  The Predators move forward and fire on the Wraithlords killing 2.  Rhinos advance behind the Predators.  Heavy Weapon Squad doubles forward.

Falcons in the hills advance and the guardians deploy.  Falcons fire on the Rhinos and kill all 3.  Guardians fire on Tactical Marines and only hit 1 that saves.  Firestorms are regrouped and they fire on the Heavy Weapon Squad and kill 3 stands. 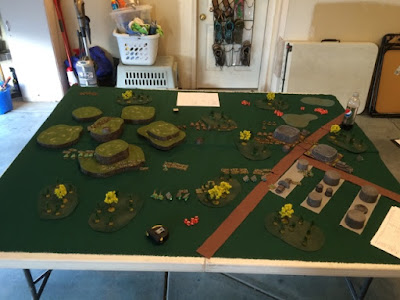 The Wraithguard move further into the city and fire on the Land Speeders, but they make all their saves.  The Guardians move up and also fail to kill any of their targets.  The Heavy Weapons Platforms fire on the Predators, but fail to score any hits as well.

The Guardians in the hills snap fire on the Tactical Squad and kill 1 stand. 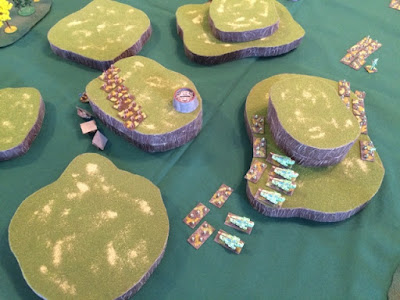 One Guardian squad and Falcons launch an assault on the Tactical Squad holding the objective in the hills and kill of the Marines, but suffer 2 losses. 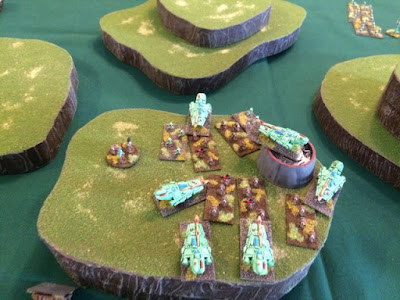 The other Guardian unit moves forward to get into position to assault the Marine tanks on their next activation.  The Firestorms fired on the Tactical Squad in the city and killed 3 stands.

The Vindicators snap fire on the Firestorms and kill both and 2 Guardian stands.  The remaining Guardians fail their moral test and are removed. 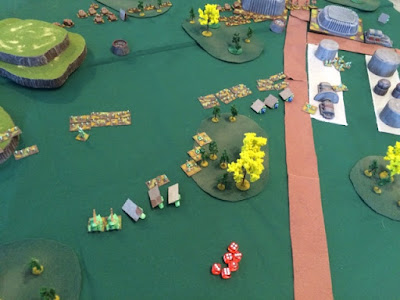 Wraithguard snap fire on the Land Speeders, but miss with all shots.

The Land Speeders and Rhinos move return fire on the Wraithguard and wipe the unit out.  The Tactical Squad and Dreadnoughts combine fire and kill the remaining Guardians in the City.

Knowing that they need to claim an objective the Guardians in the center make a reactionary move toward the center objective. 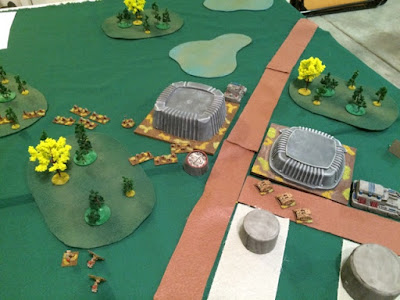 The Marines in the center again attempt to regroup the Terminators and this time they are successful.  They kill off the Guardian squad that was attempting to take the center objective. 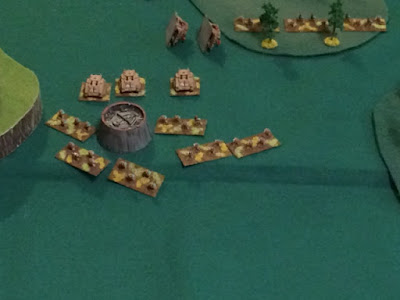 A Tactical Squad snap fires on an Eldar Command stand and kill it while the Dreadnoughts move forward.

The Guardians hold their ground in the hills and kill a Marine command stand.  The Falcons move toward the center objective and kill 2 Rhinos and 2 Dreadnoughts.

The Wraithlords assaults the Tactical Squad on the center Objective, but loses the fight to the Marines and fail their save.

The Marines made a steady advance forward and once they claimed the objectives, were able to hold onto them.  With good saves and moral, the Marines are a stalwart force to face off against.
Posted by sean gewecke at 3:19 PM No comments:

I wanted to try out my new alien swarms out in a game so I decided a Starship Troopers themed game was in order.  I decided to go with a game that was in line with the book instead of the movie.

You have been chosen for a mission of utmost importance.  The engagement area has a number of bug holes that you must monitor.  If any bugs exit these bug holes you are to eliminate them.  Each of you will be equipped with the standard Morita Assault Rifle, but today you will also be equipped with a MK55 Tactical Nuclear Launcher.

Teams will be entering a number of bug holes in search of some specific intel.  Once they have a acquired that intel, you will be notified to close the holes.  We expect you to use the nukes to close all the bug holes in your area.

We expect the bug resistance to be heavy, but we know that you are the best trained and best equipped soldiers in the universe.  We know that you will not fail to do your duty.

I used the LaserStorm rules with some slight variation for this game.  I used 15mm models for the Mobile infantry.  6 soldiers were assigned to this area of the engagement zone.  There were 6 bug holes in the area.

This was a test run for this kind of scenario, so I wasn't sure what to expect.

The first play through.

The bug holes where spread around the table fairly evenly.  The MI were deployed as teams of two, but each man was independent and could act on his own.  Then the bug swarms were deployed with one swarm at each hole.

The bugs had a +5 assault score in this play through as well as the Charge special ability.  Each time they charged they were able to get 3 bases (the max we allowed) into contact with the MI trooper.  This means that the bugs effectively had a +8 assualt vs the MI troopers +2 assault.  This amounted to the MI trooper losing every assault they were engaged in and then failing their save through each time as well.

While the troopers were able to shot a few bugs they just couldn't stay away from the bugs long enough to complete their mission.

The bugs took the advantage and made short work of the MI troopers.  They got most of the snap actions and were very lucky with armor save rolls.  At the end of the game all the MI troopers were dead with only 3 of the bug holes closed. 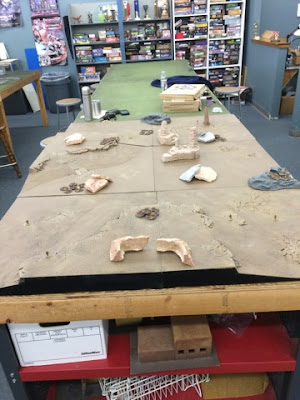 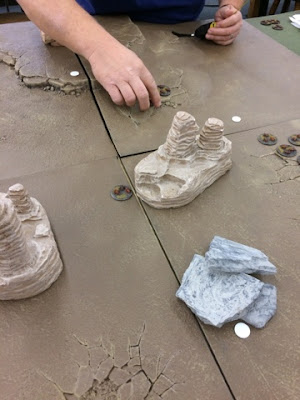 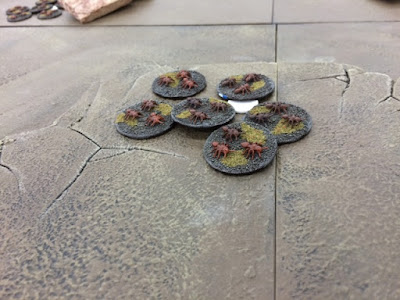 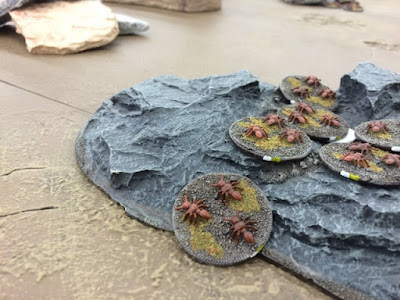 The second play through.

I made some adjustments to stats for this game and I think they were a bit too much.  Still a fun game, but...

The MI troopers did a much better job this time.  So much so that I feel like I over fixed the game after our first play-through.  At the end of this game, all the bugs were dead while only a single MI trooper had been lost. 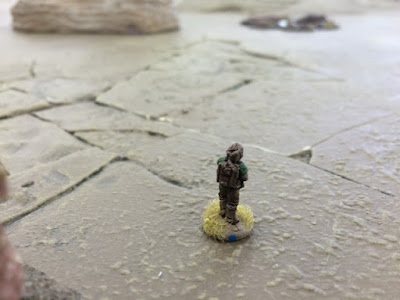 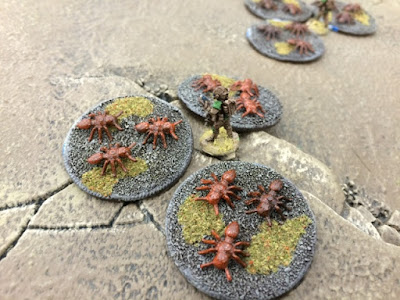 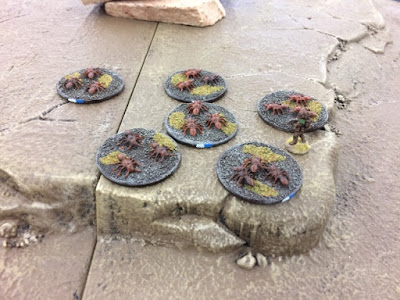 I used this game to introduce Randy to the LaserStorm rules.  However, this scenario was a pretty big variant on the basic rules.  The games were fun, but I still have a little testing to do to find a nice balance.  In my experience, anytime you have a very small force of powerful troops versus a horde of less powerful troops, luck can play a big role and can cause problems in the game.

I plan to play some more Starship Trooper themed games in the future.


Posted by sean gewecke at 6:28 AM No comments:

I recently read a post on a forum about a game recreating the Whiskey Outpost battle from Starship Troopers.  The game was played using the LaserStorm rules that I've made a few posts about.

I have always loved Starship Troopers.  Both book and movie have different places in my heart, but both have their own merits.  To keep the yelling to a minimum, yes, the book is much better.

Anyway, after reading that post and a few other comments in other places, I thought I would put together some stuff so I could play some Starship Trooper themed games.  I have Space Marines that will serve as the Mobile Infantry in 6mm games.  I could use Genestealers and Hormogaunts as the arachnids, but kind of wanted something a little different.


So in comes my ants. 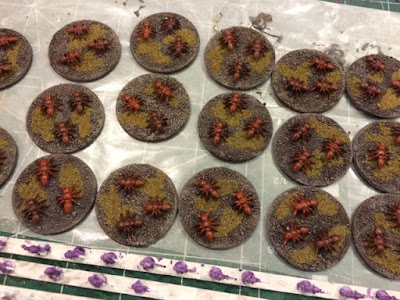 These started out as poker chips and little white ants.

I picked the ants up last Halloween at a dollar store.  They come in bags of about a hundred for $1.  I painted the ants black and then added a dusting of orange spray paint to add a little color.  I may do different colors to break the army up, or I might use the same color throughout.  Thoughts?

The bases are just cheap plastic poker chips that I picked up at Walmart some time ago.  I used some caulk to attache a bit of model railroad ballast (grit) for texture and then added a bit of flock to the base. 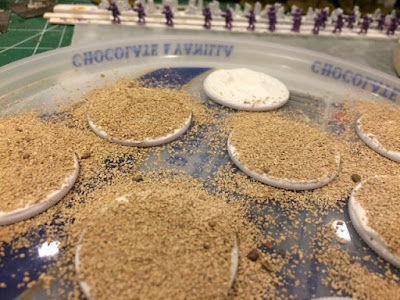 To attach the ants I mixed up some JB Weld (maybe a bit of overkill) and put a little on a couple of feet from each model and them stuck them to the base to dry. 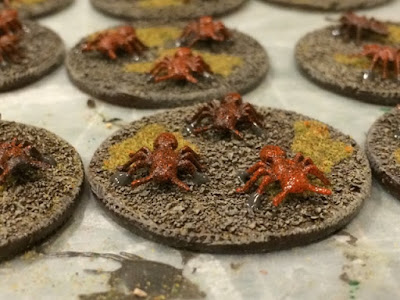 One of the great things about these is that they will work for a variety of scales:  6mm, 15mm 28mm.  They will also work for a number of different game systems.

I have completed my goal for September and this was my last month working on the Eldar for 2015.

I finished another company of Guardians and Falcons to go with them, some Wave Serpents, Fire Prisms, Fire Storms, and some War Walkers.  Another productive month is under my belt.


Since this is my last month working on this army in 2015, I though I would take a few pictures of everything I completed this year. 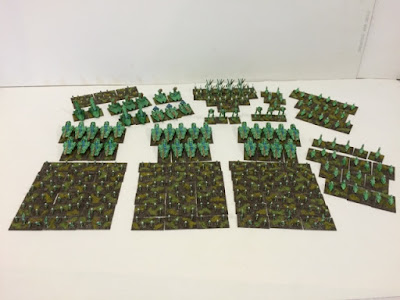 
Not bad for 3 months worth of work spread out during the year.

In addition to these models, I have some aspect warriors, and support weapons that I had painted prior to starting on the Tale of an Epic Gamer Project.  I didn't include them here, but they do add to my army options.

I will be back to these in the not too distant future.  I want to flesh out my aspect warrior units and add in some vibro cannons/support weapon platforms.  I also look forward to adding some flyers, super heavies, and titans to the mix at some point.

For now, I'm am happy to have made such great progress and am very happy with how the army looks.