I pulled out my copy of Victory at Sea by Mongoose Publishing and found a scenario that I thought would work well for a game of Imperial Skies.

The blockade scenario was a good basic one that only needed a little adjustment to fit with the Imperial Skies game.

Table size:  4' x 6'
Fleets:  The attacking player (blockader) builds a fleet to an agreed upon point value.  The defender (blockade runner) builds a fleet using 50% of the points of the attacker's fleet.
Deployment: The blockader chooses a short table edge. He then chooses a ship and places that ship anywhere along the short table edge up with 24" away from his long table edge. He then rolls a die and multiplies the result by 12 inches. The ship must be moved to the right this many inches. He may deploy the ship anywhere within 6 inches of that position. This must be done for all ships in the blockader's fleet. When completed, all ships must be facing the same direction.
The blockade runner will move all his ships onto the table anywhere along the opposite long table edge in the first turn.
Scenario rules: The blockade runner has a "fee" turn at the beginning of the battle. In effect, he may move and attack with his ships normally, but the blockading fleet may do nothing - its ships may not move, fire, or use command actions. They must simply take any damage dealt during this turn. After this first turn, initiative is rolled normally.
Game length: The game continues until the blockade runner has either been destroyed or has left the table.
Victory conditions: The scenario uses Victory Points to determine who wins. The blockader scores victory points equal to the value of any ship destroyed. The blockade runner only scores victory points for moving ships off the blockader's long table edge. He scores points equal to the value of the ship that exits the table.

I choose a large selection of small ships for the French fleet.  I was thinking they would have the best chance of breaking through the line.  I plan to replay the scenario with a different make up for the French Fleet. 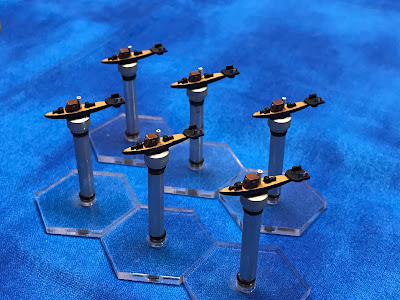 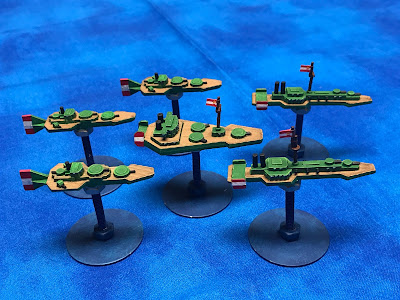 I've decided that I need to add some hard hitting units to my Kings of War Goblin army.  That means more trolls.  I am going to add a couple of hordes of trolls and plan to multi-base them.

First up is a couple of cave trolls.  Nothing too special about these guys.  They look nice and will make a good base for a unit.


I used a different technique for these models that I normally use.  It turned out well, but did take a bit more time. 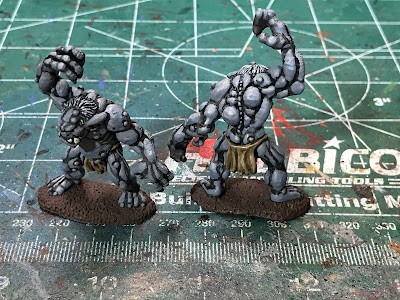 Posted by sean gewecke at 7:36 PM No comments:

I'm not sure I'm going to actually be able to complete the challenge given my progress over the past few months, but I'm still playing games.

Only 2 games played this month.  There is still time for me to complete the challenge, but if I fail, I'm not going to beat myself up.


The Walking Dead: All Out War

Posted by sean gewecke at 11:47 AM No comments:

I sat down for another game of Conflict of Heroes: Awakening the Bear.  I played the second scenario from the solo expansion; Tank Hunter.


This scenario is very challenging and I have yet to beat it.  I did actually manage to kill a tank this time, but still didn't manage a win.

I'll need to try some different tactics next time.

Posted by sean gewecke at 11:42 AM No comments:

Conflict of Heroes: Awakening the Bear - Solo Play Through 1 - Search and Destroy

Conflict of Heroes: Awakening the Bear is one of my favorite games.  I have not played it as much as I would like, but it is a fantastic games.  I decided to play this game as part of my 6 x 6 Game Challenge so that I can get a few more games played.

I used the solo expansion for this game and played the Solo Mission 1 - Search and Destroy.

This game is full of difficult decisions.  The player constantly has several options and you have to pick one.  This means that you might miss the opportunity to do something else.

The game was a lot of fun and I am looking forward to getting more games played as I work through the game challenge.