Last night my friend, Randy, and I planned to played another game of Future War Commander.

It was a basic Encounter scenario between Marines and Hunter Scavengers.  I used Epic 40K Space Marine and Ork models to represent these forces on the table.  I got the orks painted.  I have not had a chance to paint my own as I have been working on finishing the marines so please forgive me.

The Marines took a core of 8 infantry platoons mounted in Rhinos.  They had 5 support dreadnoughts, 4 Predator tank killers, and 4 HQ sections and 1 CO.  A total of 2,075 points. 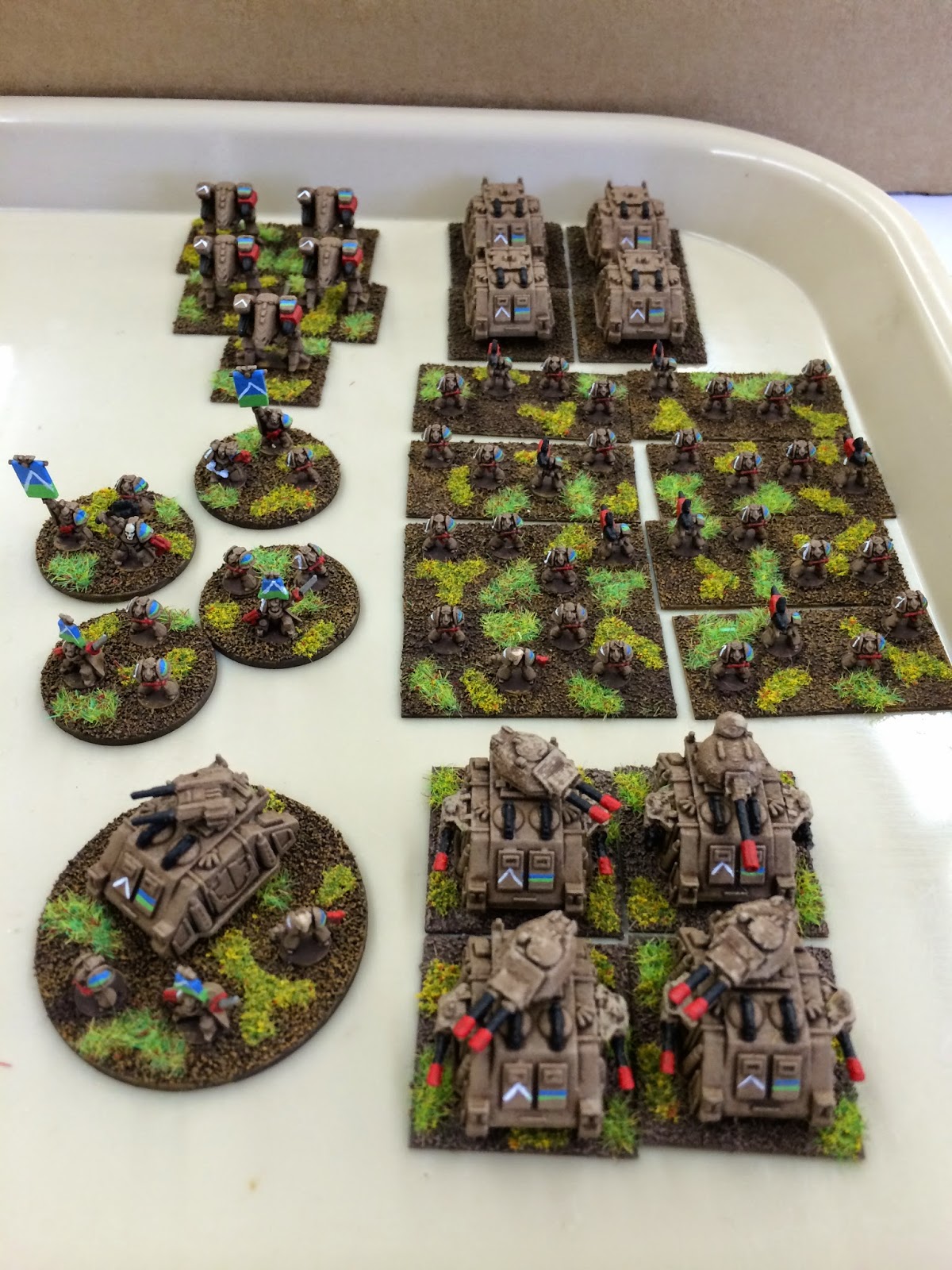 The Hunter scavengers took 20 units of scavengers, 18 assault wagons, 4 support walkers, as well as 6 HQ sections and 1 CO section.  This was a total of 2,430 points.  They get 20% more points due to the primitive technology level. 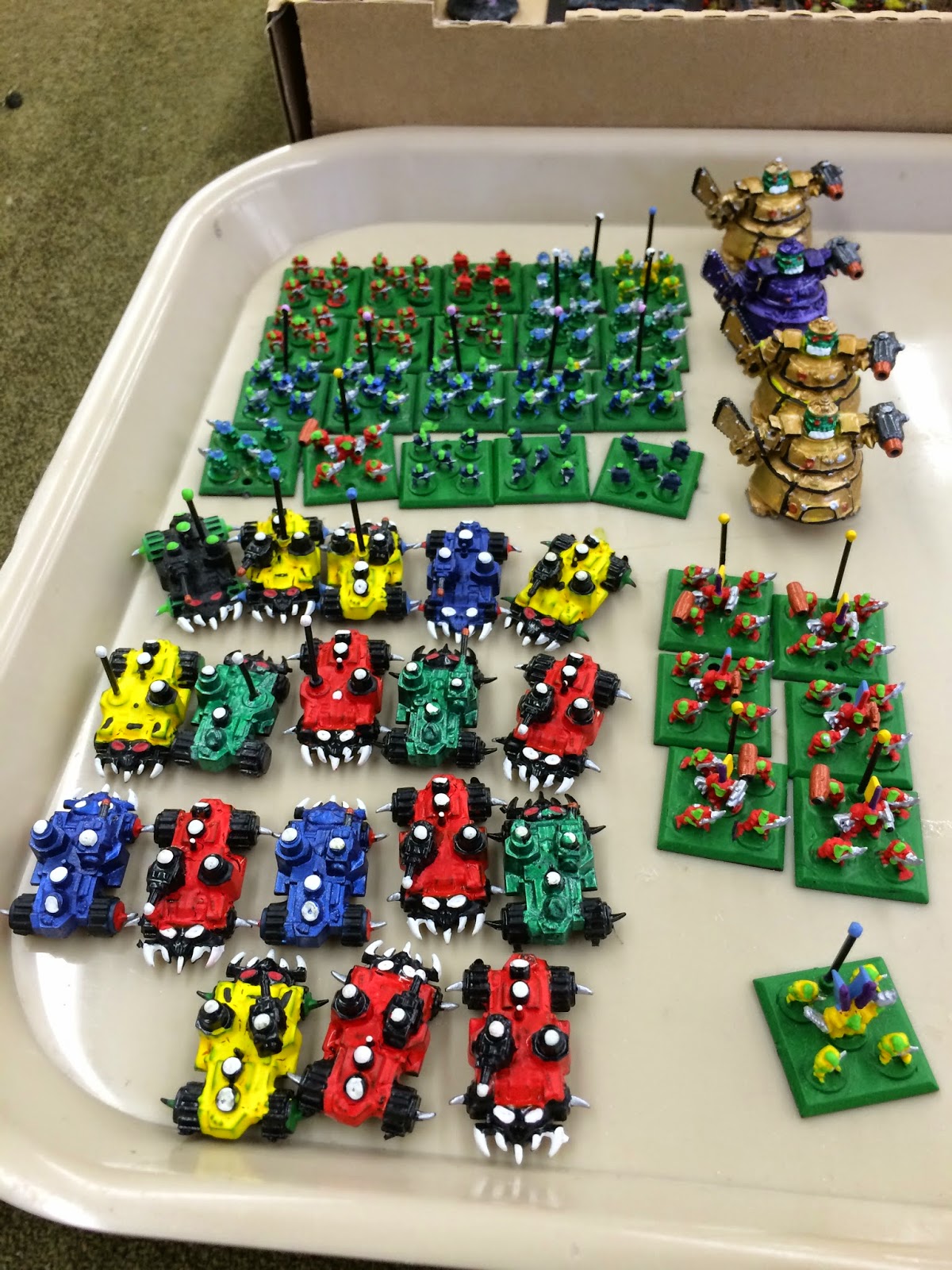 The table was dubbed Spaceganistan because of the ridged terrain and the "poppy" fields. 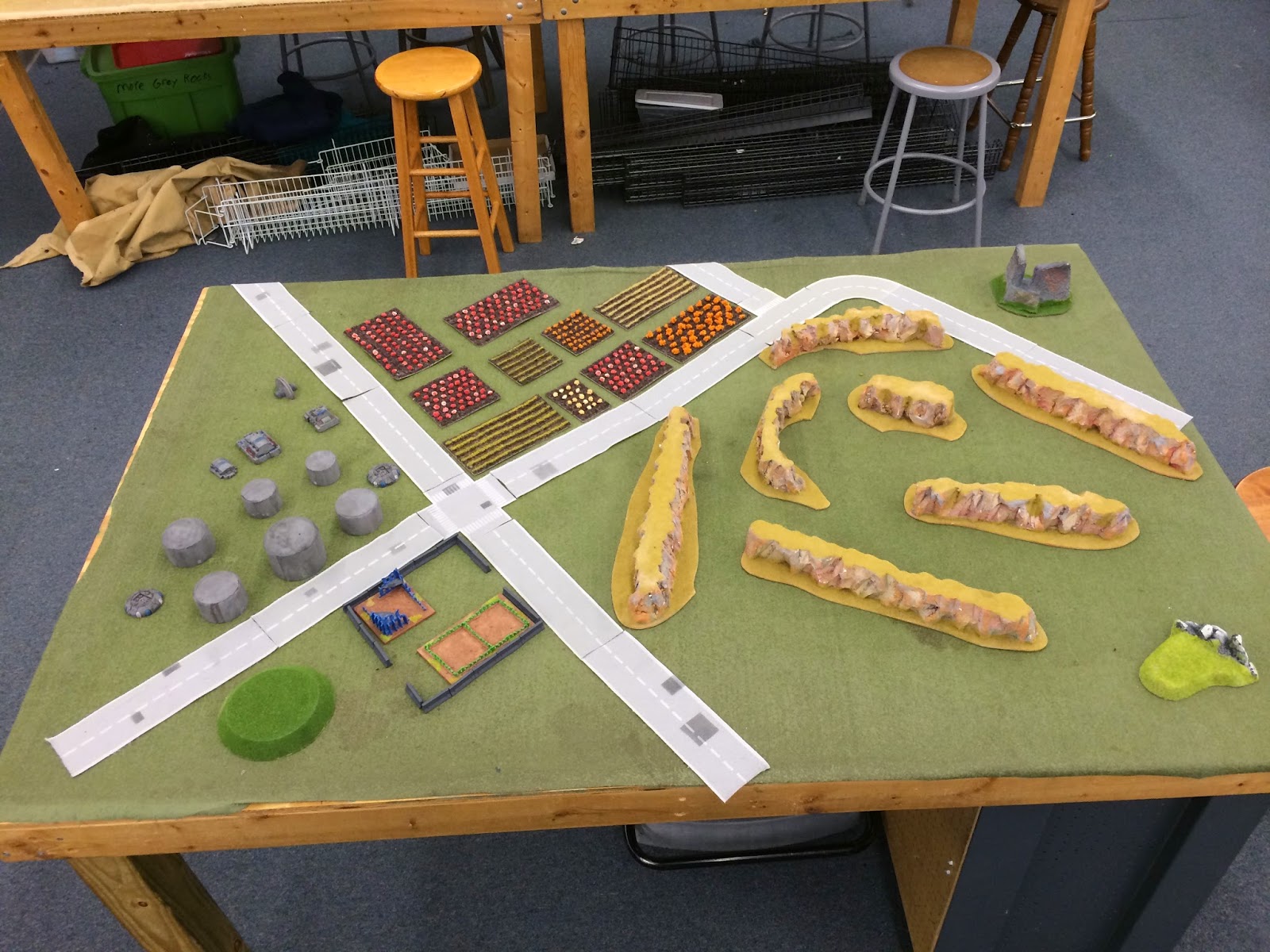 The Orks split up their forces into three sections and spread out in their deployment areas.


The Marines split into two forces.


Turn 1 started with the marines taking the initiative as they started moving their forces forward.  The Walkers on the right flank pushed forward and made several move action before being halted by a failed roll.  A few bad rolls and the advance halted with the Rhinos unable to advance at all.

The orks had some awful command rolls and the center was unable to move at all while the flanks were only able to make 1 move action each.

Turn 2 is where all the action happened for our game.  The Walkers moved up some more and started shooting at the ork wagons.  They were not able to do much damage however and the orks only lost 1 wagon. 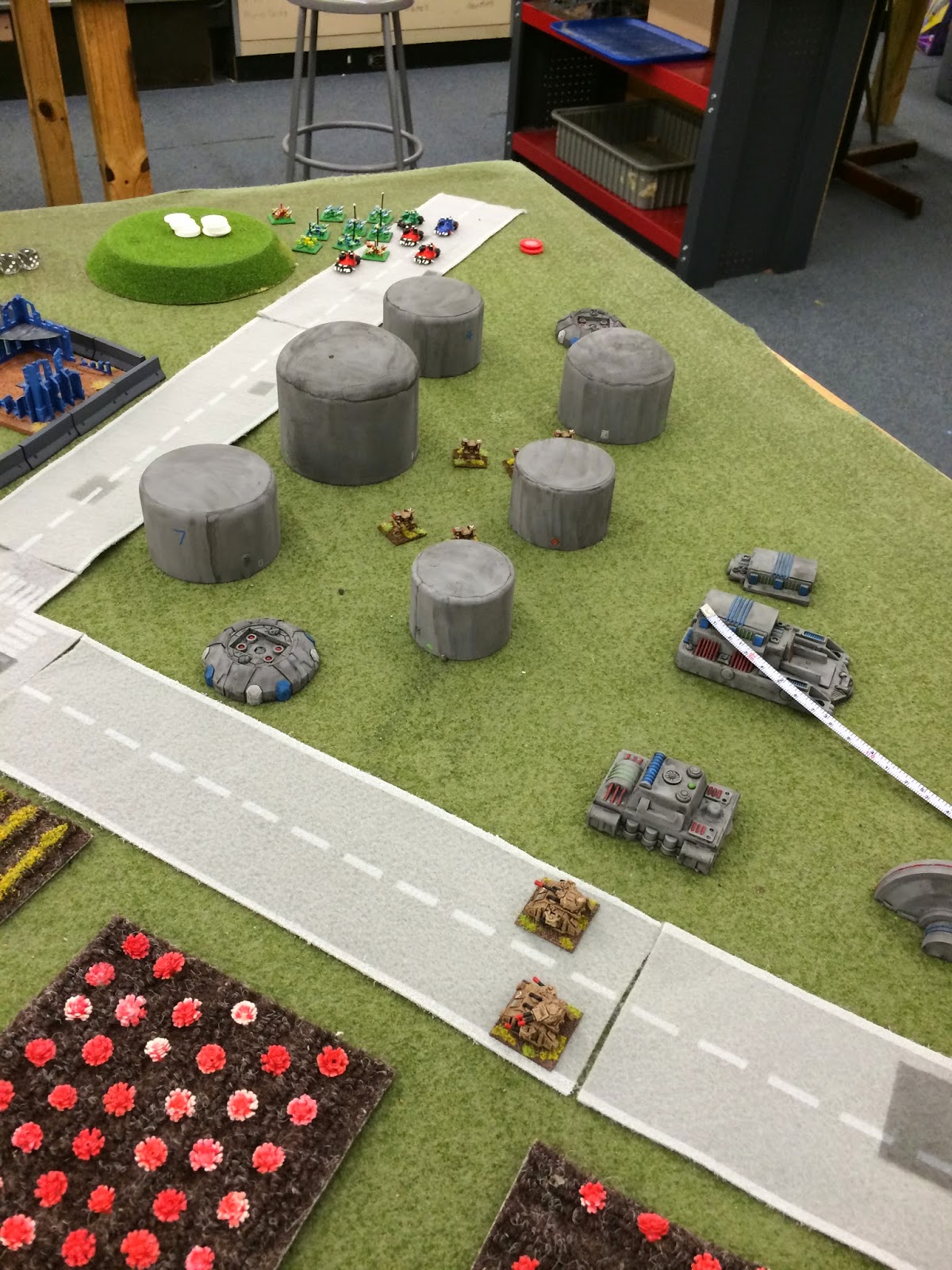 The tanks on the  right flank pushed forward and opened fire on the ork wagons in the center.  A few shots connected and another wagon was knocked out.

On the Marine's left flank the Rhinos finally got moving and advanced a little before deploying the tactical squads.  The tanks here also advanced and turned into the ridge line to face off against the orks here.  A few shots hit home, but at the end of the day only 1 wagon was suppressed.

The Ork wagons on the left flank used initiative to assault the walkers that had gotten a bit to close.  This was the first assault we have had in our games so it went slow as we looked up rules and tried to make sure we handled it correctly.  I wasn't sure at the time, but after re-reading the rules I think we did a pretty good job with it.  The 5 wagons that assaulted took a bit of fire closing in and 2 were suppressed and all took some hits.  However, suppression doesn't keep you from continuing the assault so they pushed in and prepared to smash the walkers under the treads of their wagons.  Ummmm, then I rolled my dice.  Let's say it didn't go as planned.

The orks did suppress 2 of the walkers, but didn't destroy any of them.  The orks lost 2 of the wagons that had assaulted and the remaining one fled.
Some damage was done from the assault so a little shooting added on top of that was able to knock out 1 walker.  So not a total loss, but it did hurt.

On the left flank the walkers were ordered to advance and the command roll came up a 2.  Bonus!  So they were able to make 2 activations without need to pass a second command roll.  No enemy units where visable so both orders were movement orders.  They failed their next command roll so still had no enemy in sight, but were getting closer. 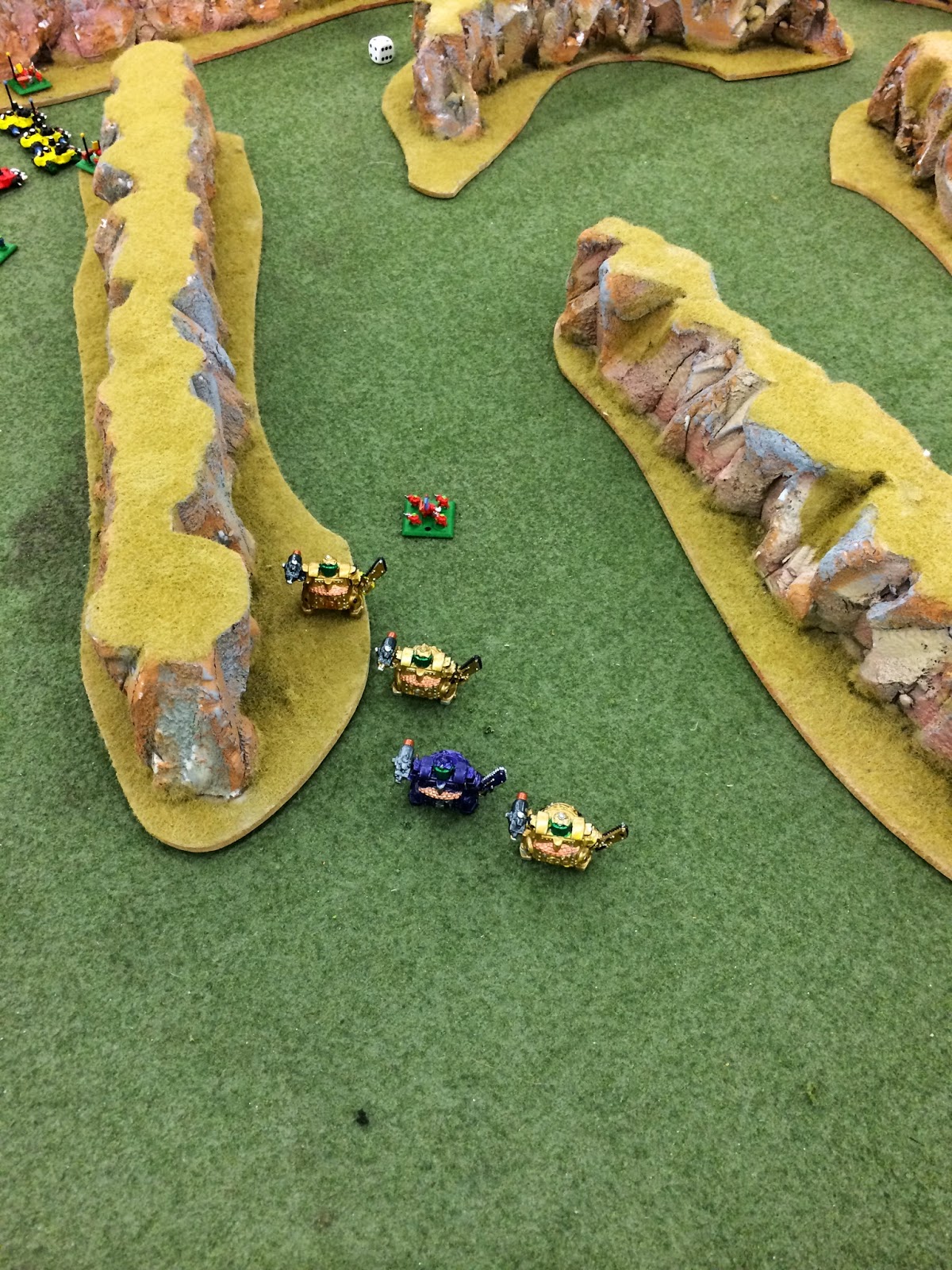 The center split forces and one side headed into the ridge line and the other headed up the road.  The units heading into the ridge line were able to get into range and opened fire on the enemy tanks and managed to score a couple of hits, but not much else.  On their next order to fire, though they also rolled 2 on their command so were able to take 2 activations.  After the smoke cleared both tanks and 1 infantry unit had been knocked out.

The orks heading up the road also got a few shots off at the infantry that had just deployed from their vehicles, but not enough to kill any and none were suppressed.

Randy is one of the owners of Gauntlet Games and was working while we played our game.  The store was pretty busy (which is a good thing) so the game played pretty slow.

Sorry for the abbreviated report, but such is life.

This is my first time using Orks.  I like the large number of units, but the leadership is awful.  It is very hard to get many activations.  I took lots of commanders for that reason, but still failed lots of rolls.  I enjoyed them and will be painting up a force at some point.  Probably after my tyranids get built up a bit.

Our first experience with assaults happened in this game.  Close combat rules are always something I worry about in a game system as they go wrong so often (IMHO).  These seemed okay, but in truth it was only one small assault.  I think I might set up a few assaults on a table and play through them just to get a better handle on the mechanic.

I'm still digging these rules and will probably try one of the lopsided scenarios next.  By lopsided I mean the attacker/defender gets twice as many points as the other force.  Those are always fun and can be challenging.

Are my army builds reasonable?  What do you include in your forces?  How many points is your typical game?
Posted by sean gewecke at 9:24 AM