I had the opportunity to play another game of Future War Commander recently with my friend Randy.  I am really starting to like this game.

We played the first scenario in the book Colonization - Recce Phase.  In our game, a group of Marines has found a suitable planet for colonization.  However, that planet is already inhabited by a people group know as the Eldrich.  The Marines must go down and learn a little about these inhabitants and reconnoiter the area around their deployment area.


Both groups had 1 CO and 2 HQs.  The marines had 2 Land Raiders for heavy support, 4 assault walkers for close in support and 10 infantry units with transports.  The Eldrich fielded 8 guardian units, 8 Falcons, and 5 Assault Walkers. 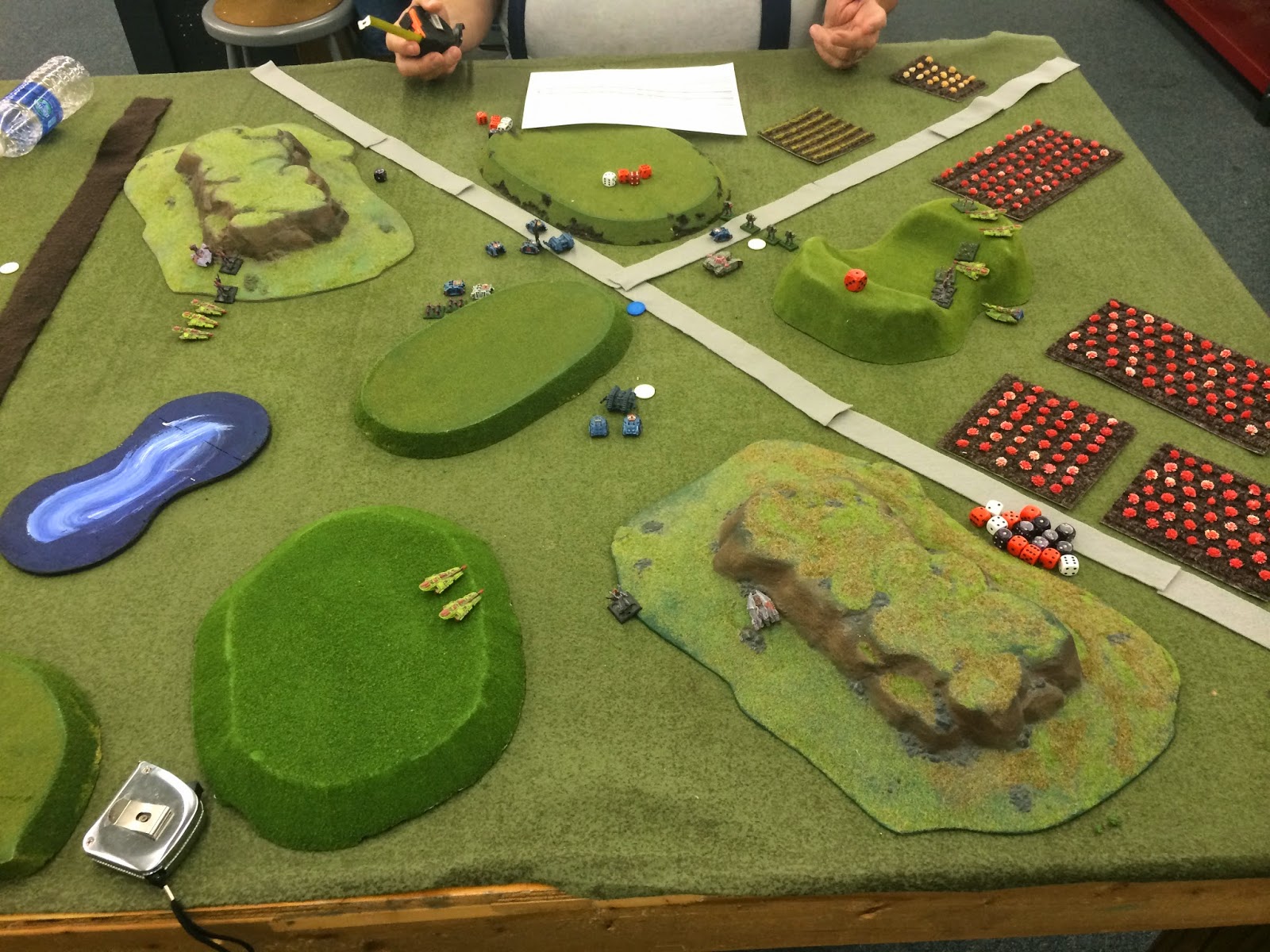 The marines used Orbital deployment to deploy.  So essentially they get to drop down in the center of the table.  Their objective is to move units to the table edges to explore and then return to their deployment zone for extraction.  Since the table was 4 x 4 their mission was actually a little easier.  They split their forces into 4 small groups ready to head out to each of the table edges. 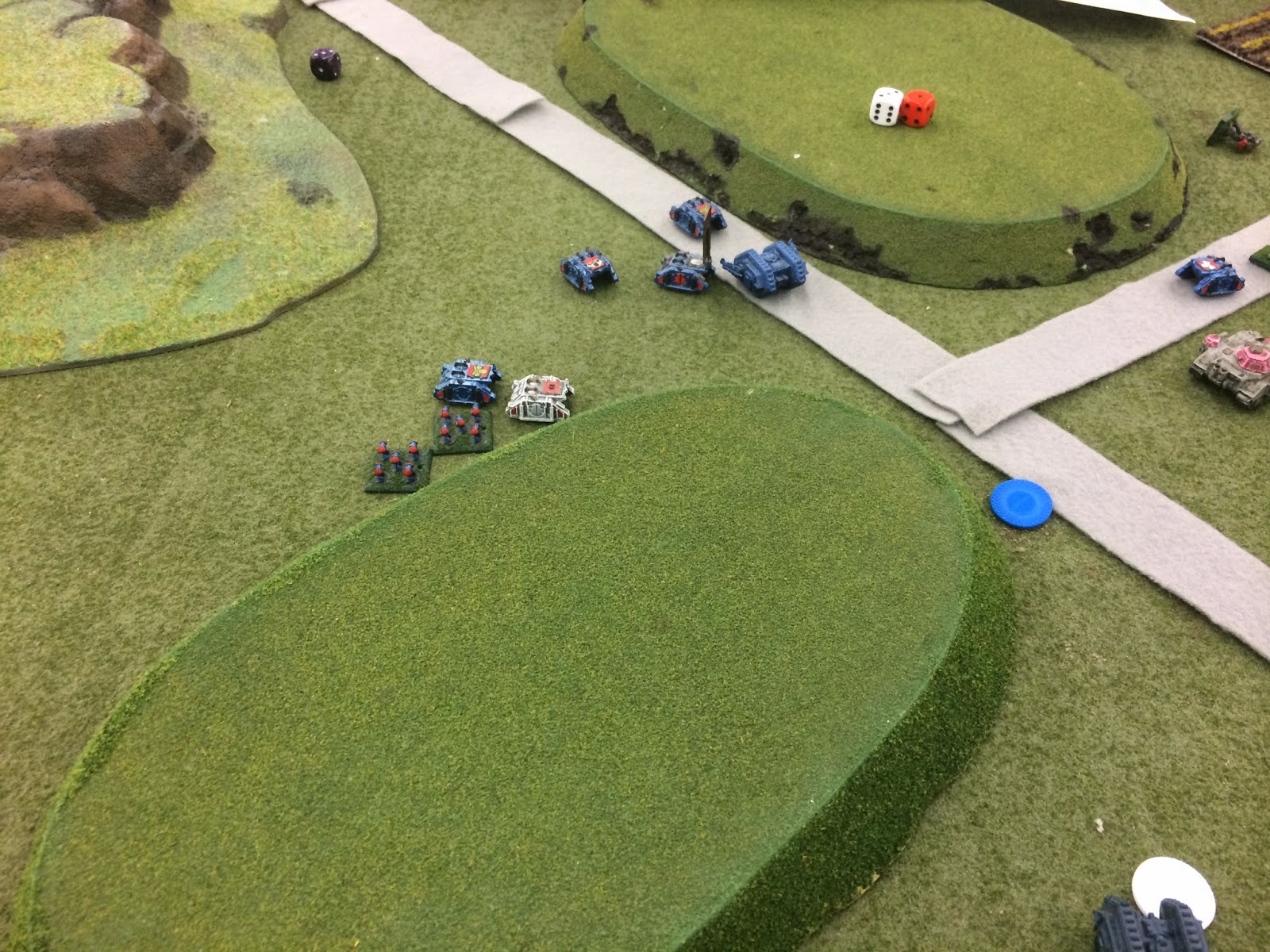 The Eldrich got to deploy after the marines and split into three (mostly equal) groups.  The marines sent 2 Rhinos down each road and another 2 overland.  The land raiders took supporting positions and the assault walkers joined one group heading to the east. 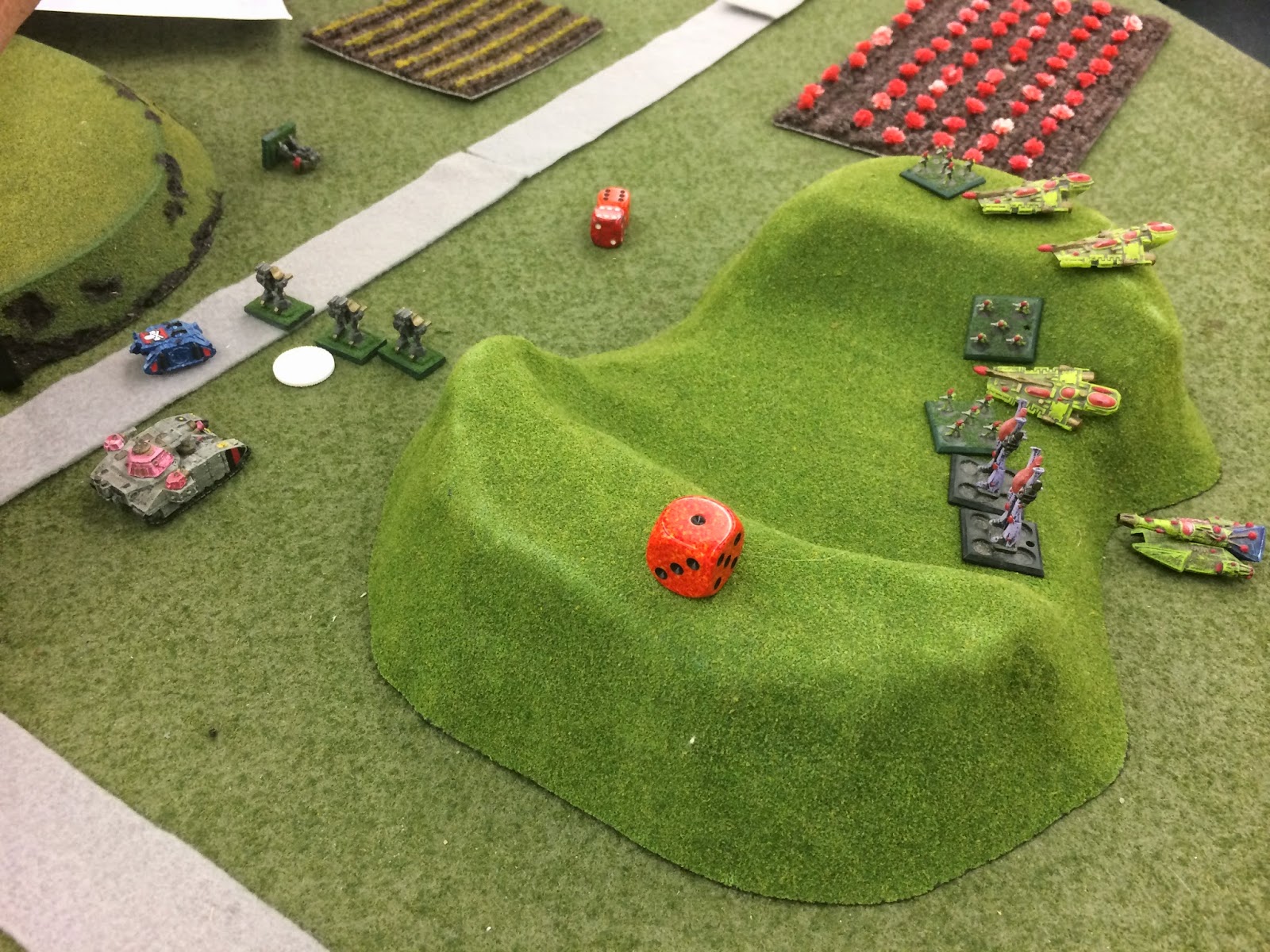 The Eldrich forces managed to suppress one Land Raider, and an assault walker and destroyed a single rhino. 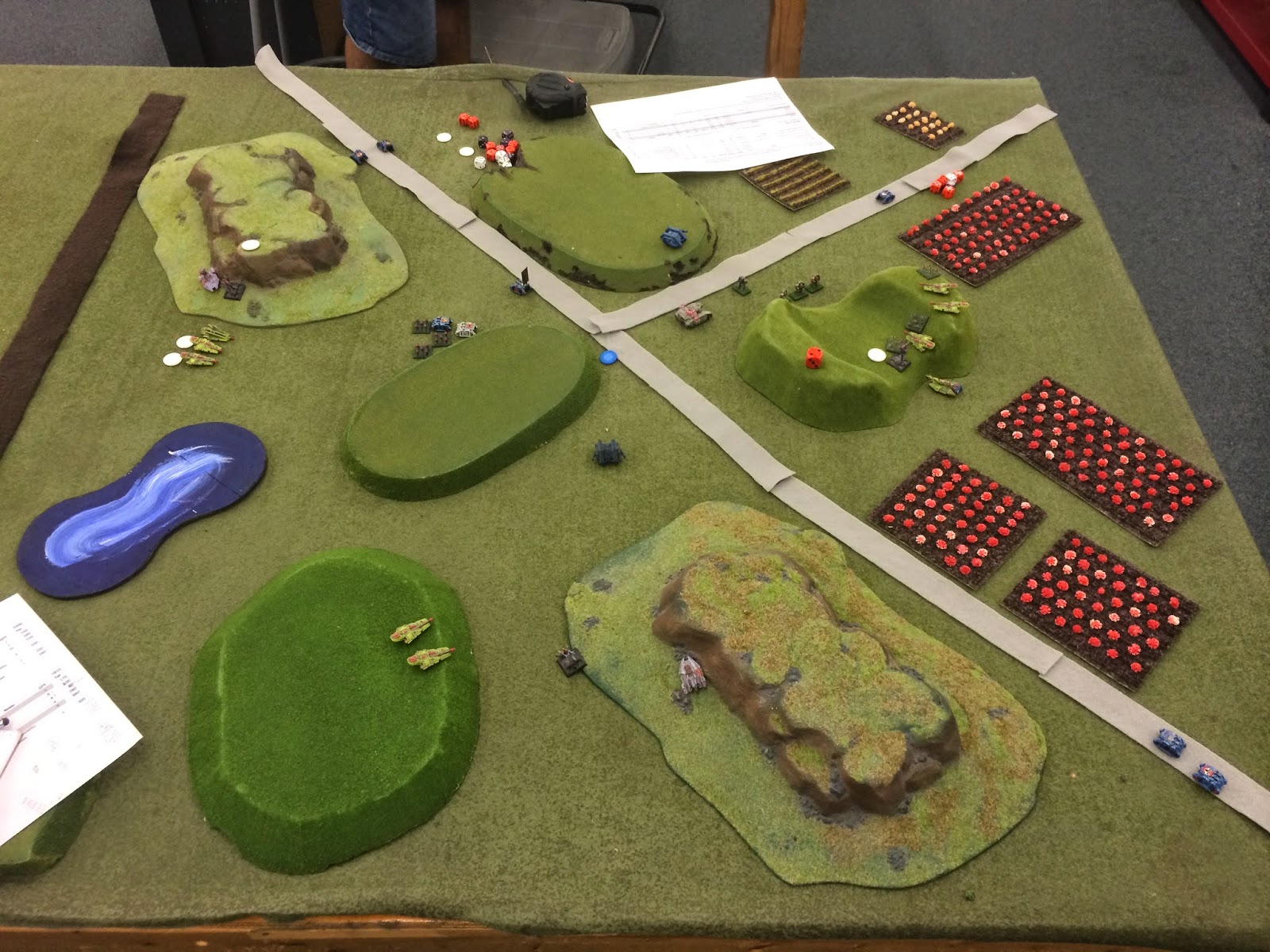 The marines heading North and South make good time and nearly reach the table edges.  Since they are heading for the corners, each group will be able to touch 2 edges.  The Eldar are out of place to stop them so instead try to do enough damage to break the marines. 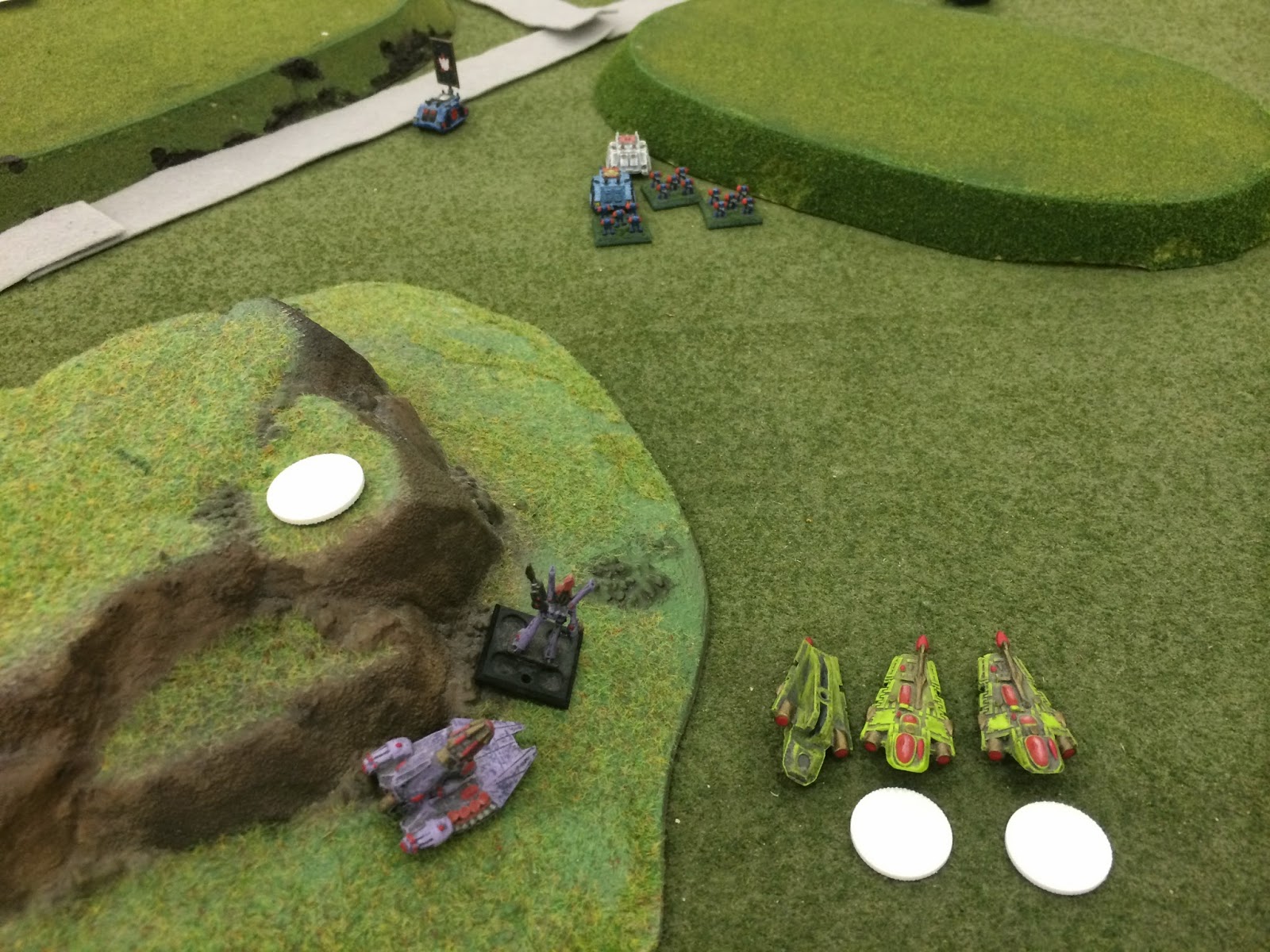 Some lucky die rolling sees the Eldrich in the west suppressed or destoyed after some impressive firing by some infantry units.  They passed several command checks and kept pounding on these guys. 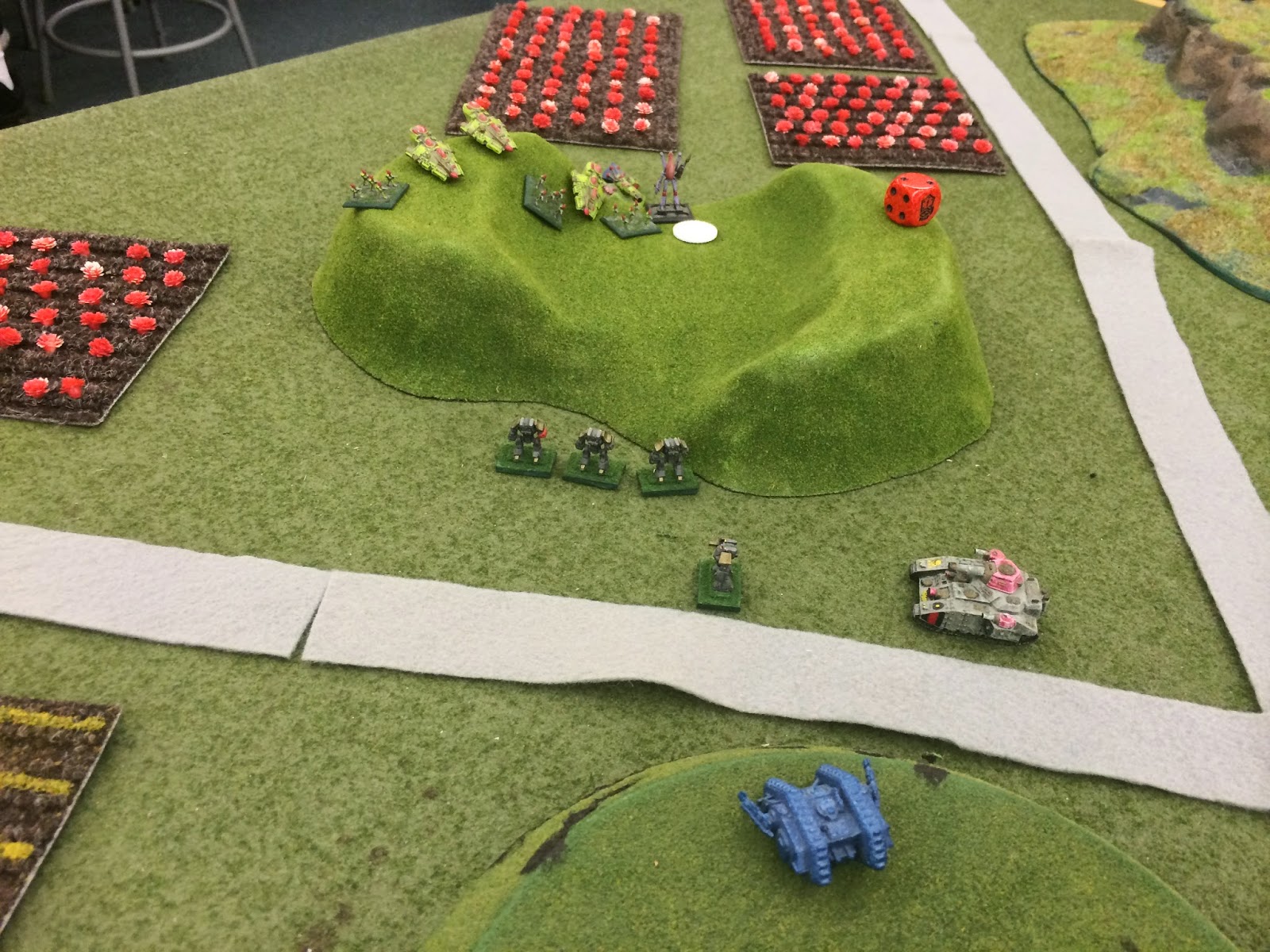 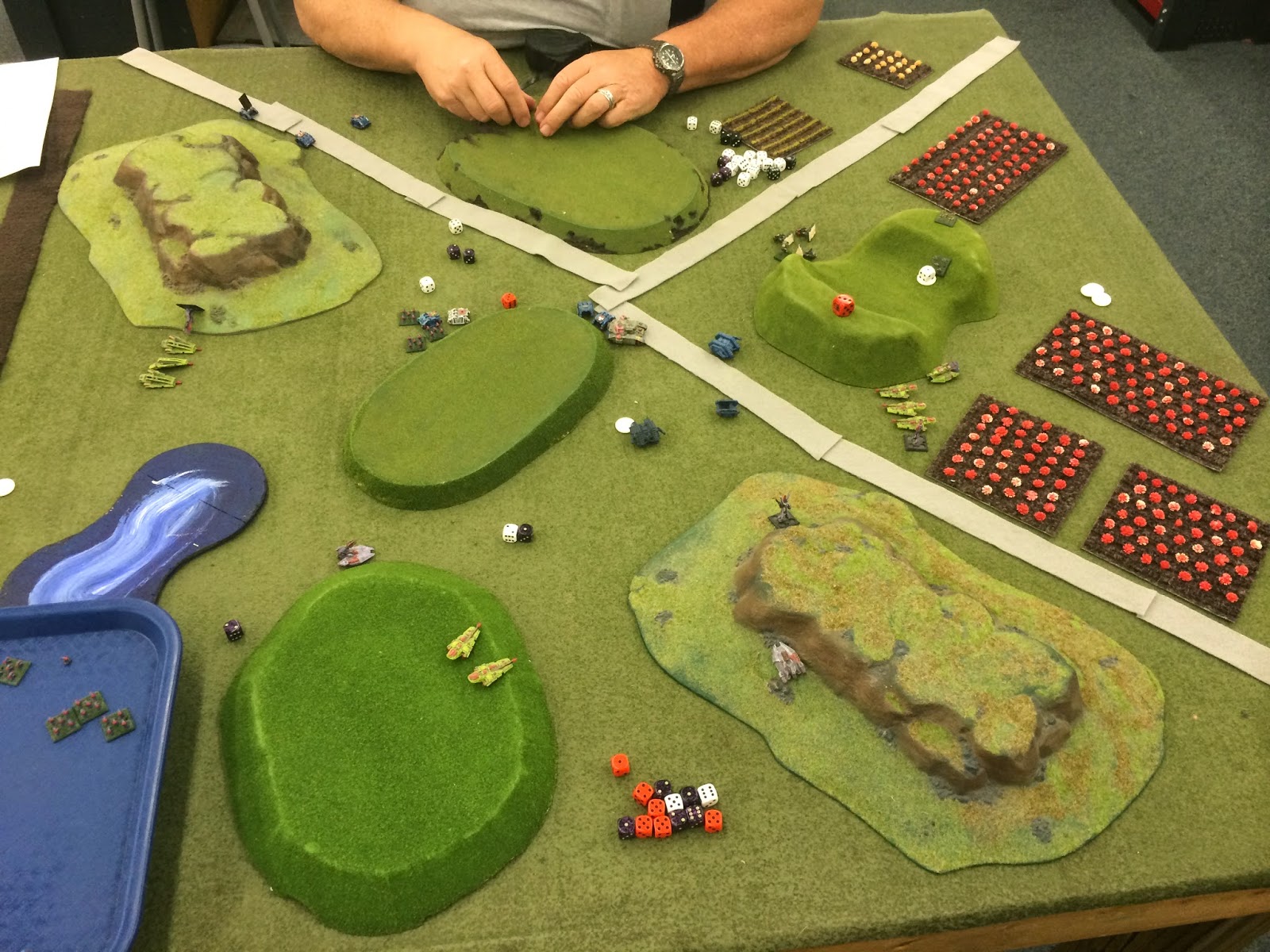 The Rhinos heading to the North and South are all able to get to table edges and look around.  With the appropriate intelligence in hand, they head back for their deployment.  Now it is a mad rush to get back to the deployment zone for retrieval.  It doesn't look like the Eldrich will be able to stop them, but they will try.

The infantry on the western flank continue to pound away at the previously suppressed units there.  Since they were suppressed, they couldn't pull back.  The marines manage to destroy all of the units on western flank except for the command team. 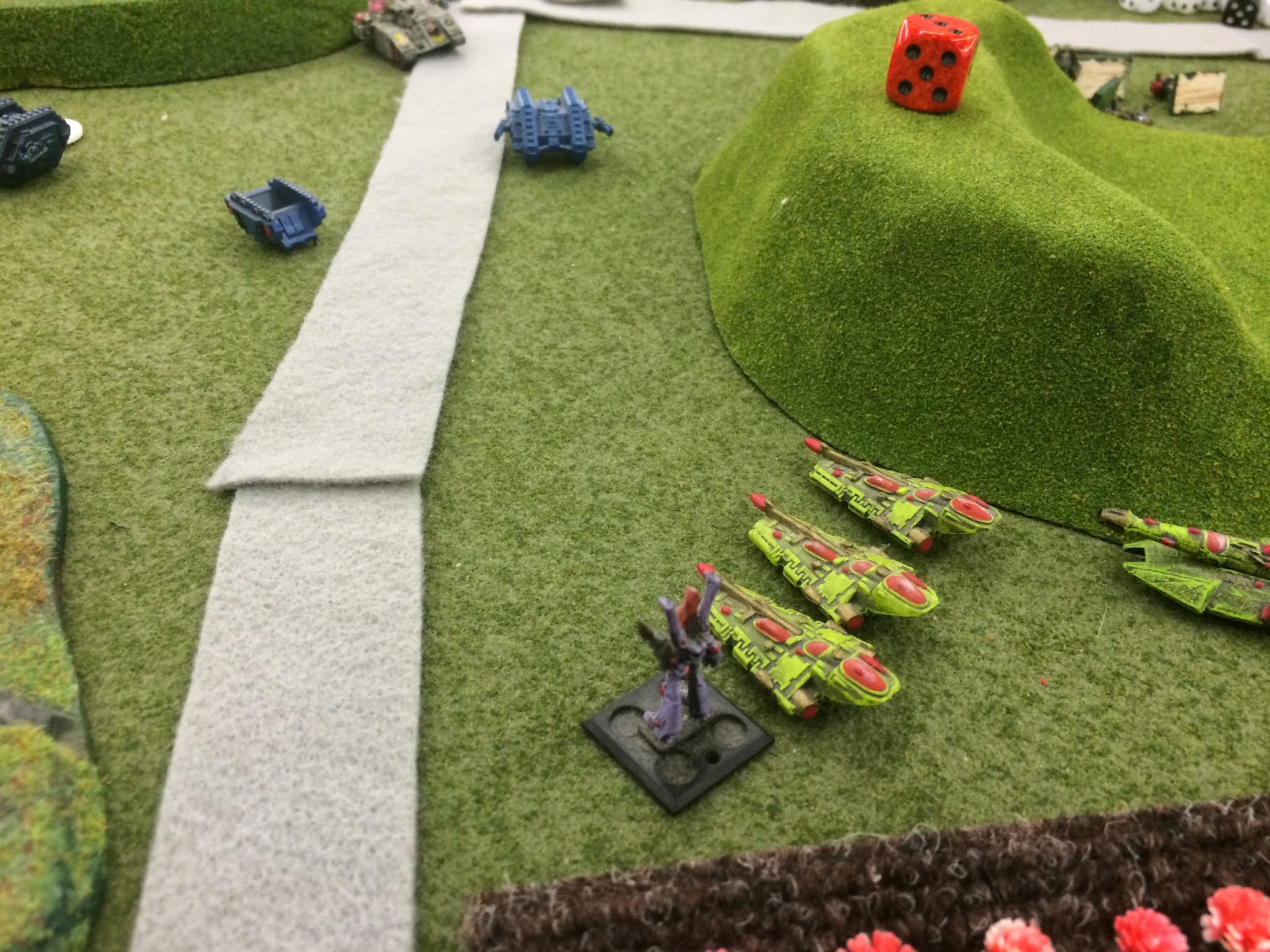 The Eldrich try to get a few more kills in, but are unable to do enough damage to break the Marines.

The Marines pull all their forces back into their deployment zone which ends the game.

I think the Eldrich should have taken more infantry and made use of ambushes (I did not include them on purpose as this was only my second game).  I still really like this game even though I am getting my butt handed to me when playing it.  Maybe I will try one of the other armies I have available instead of Eldrich.  The Eldrich are the most painted though, so until I get more paint on someone else...

Maybe next time the Eldrich will hold the line a little better.  What would you have done differently?

I have been working on painting Marines instead of using the painted models I got in the box.  Here are a few examples of what I have done so far.


I want to do some kind of unit/army markings, but I don't know what to do at this scale.  Any ideas?