I am a big fan of big armies.  I like the idea of commanding ranks upon ranks of infantry and having tanks everywhere you look.  With many of the games I have played I end up using the armies with lots of troops (goblins in Warhammer Fantasy, Guard in Warhammer 40K, etc.)  So for a long time, I have been eyeing 6mm models and armies.  I just feel like you get more stuff on the table with this scale.

About a year ago, I purchased a large lot of used Epic 40k models that my local game store Gauntlet Games acquired.  There were large forces of Eldar, Marines, Guard, Tyranids, Chaos, and Squats in the box.  I had high hopes of using this new collection for epic conflicts where I could defeat my enemies on the field of battle.

With models in hand, I started looking for different rule sets to try out.  I looked at Epic 40K (and its varients), Exodus Wars, Dirt Side, Command Horizon, Strike Legion, and a few others.  Some I got rules for a read through them, others I just read reviews on.  I decided to try Future War Commander as I like the idea of using whatever models I have available and the ability to create my own unit stats.

I purchased a PDF of the Future War Commander rules about a year ago and read through them.  Other shiny things distracted me, but now I have pulled the rules out again and decided to put some lead on the table and wanted to give the game a try.

I called my friend Randy and asked if he would be up for trying a new game.  "Is it miniatures?" he asked.  "Of course," I said.  And Randy was in.

I decided to keep things simple for my first go at this.  Looking through the scenarios, I decided to use #5, Colonization Relocation.  Next, it was time to put some armies together.  I have not yet painted up all these models yet.  (Okay, I admit it, very few have seen the business end of my paint brush.)  Some came painted decently and other not so much; mostly they were bare metal.  I put together two forces of mostly decent painted troops with only a few proxies and just one model with no paint at all.

I cheated a little and just used tanks and walkers.  I didn't use the required minimums of infantry.  I will add more variety in future games, but wanted it to be simple in the first go.

The Marine Corps commanded by Randy. 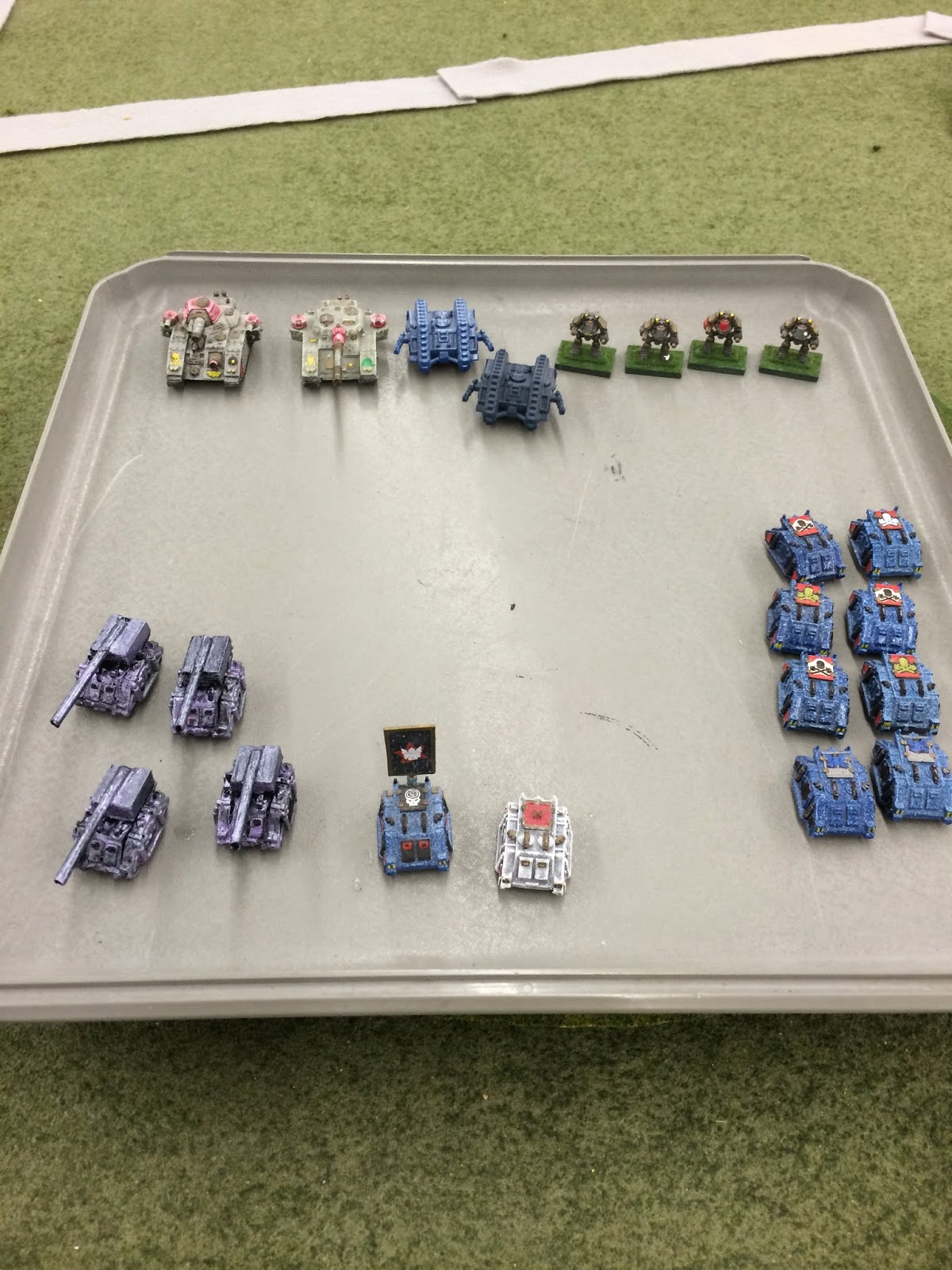 The Eldrich Caste commanded by yours truly. 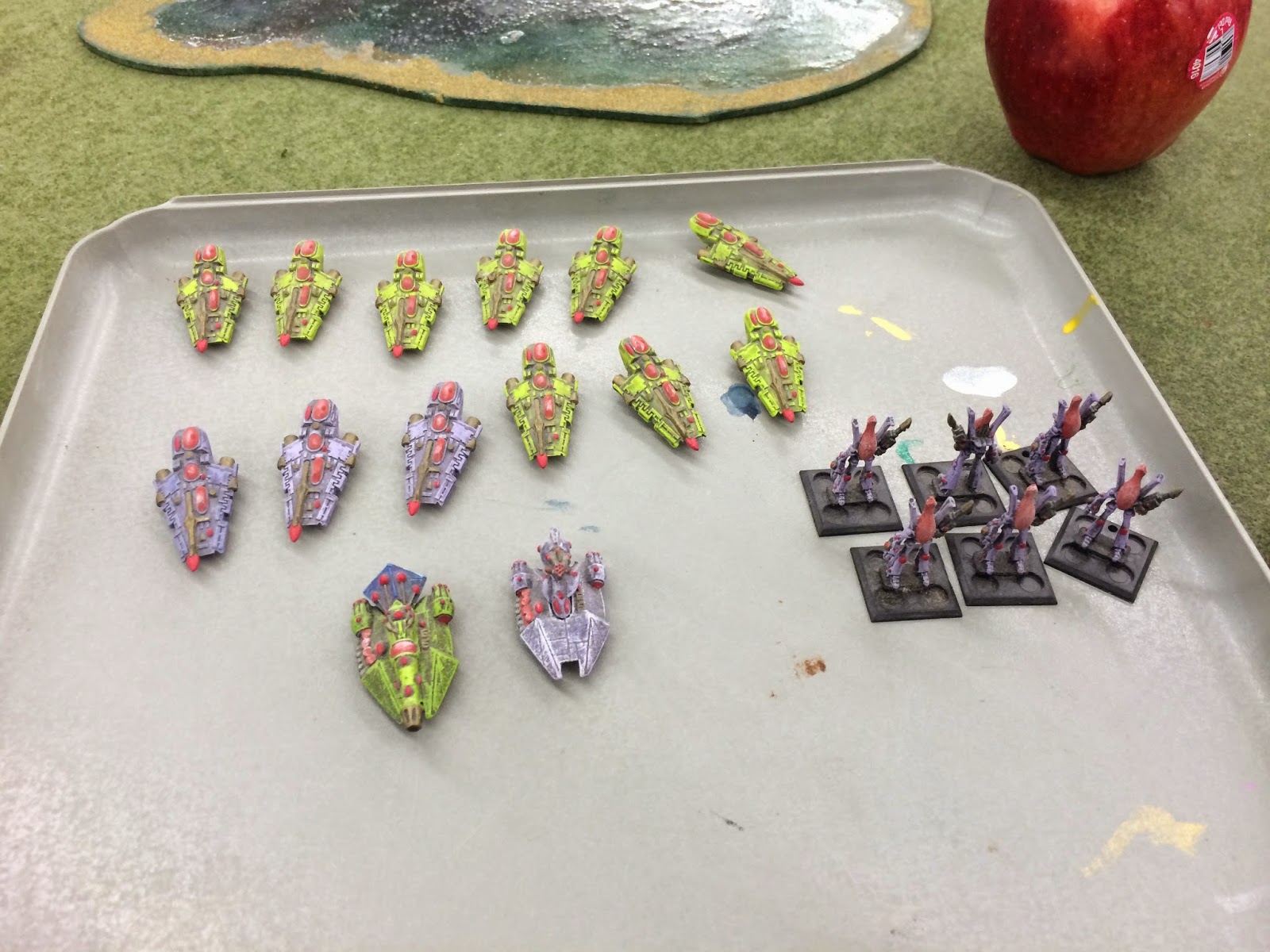 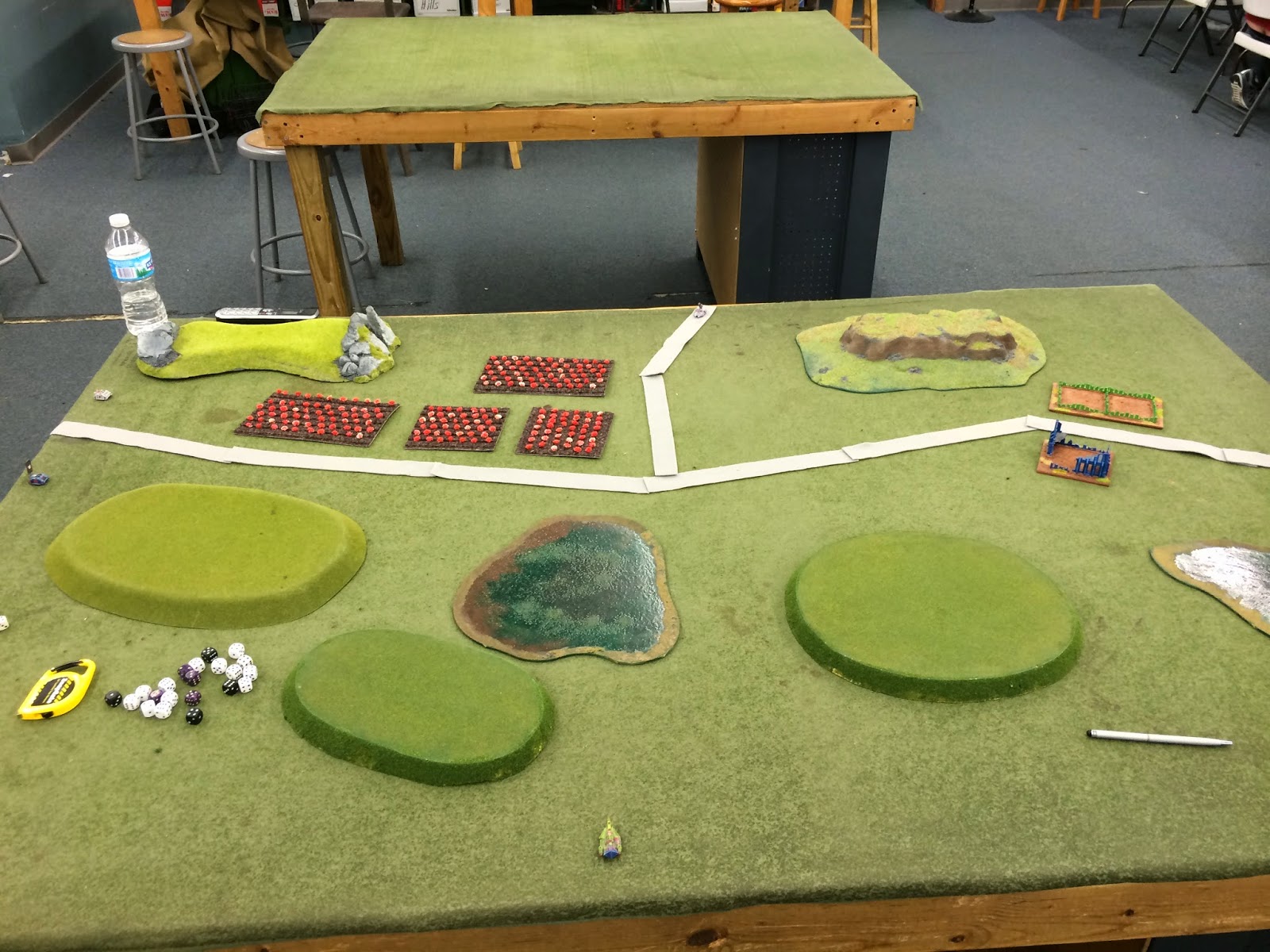 The Marines placed their command units and then proceeded to fail their command rolls for both units.  I guess they were still trying to get everyone packed up and on the road. 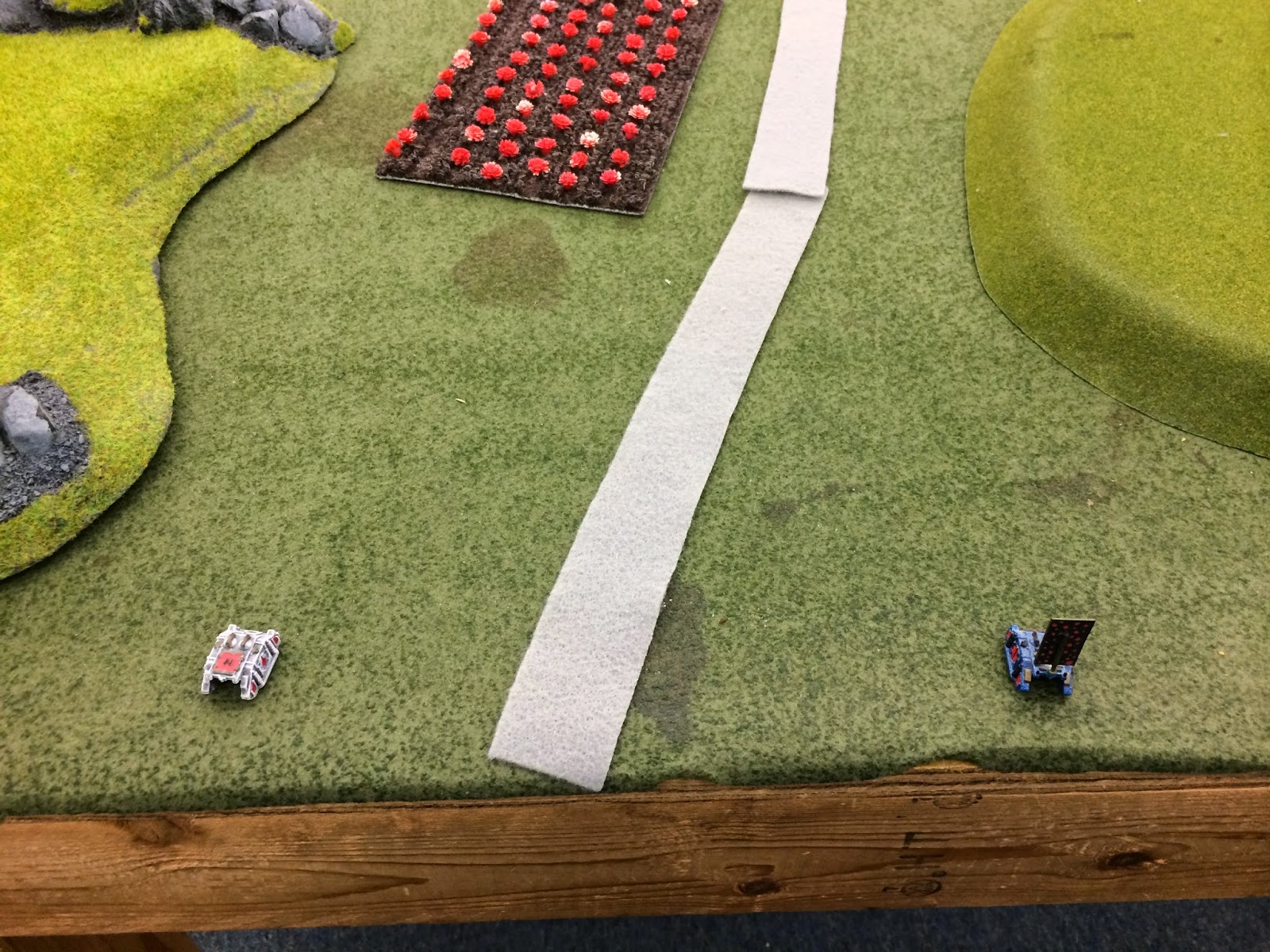 The Eldrich were able to bring both formation on the table.  However, with only the command units on the table, there were no targets available. 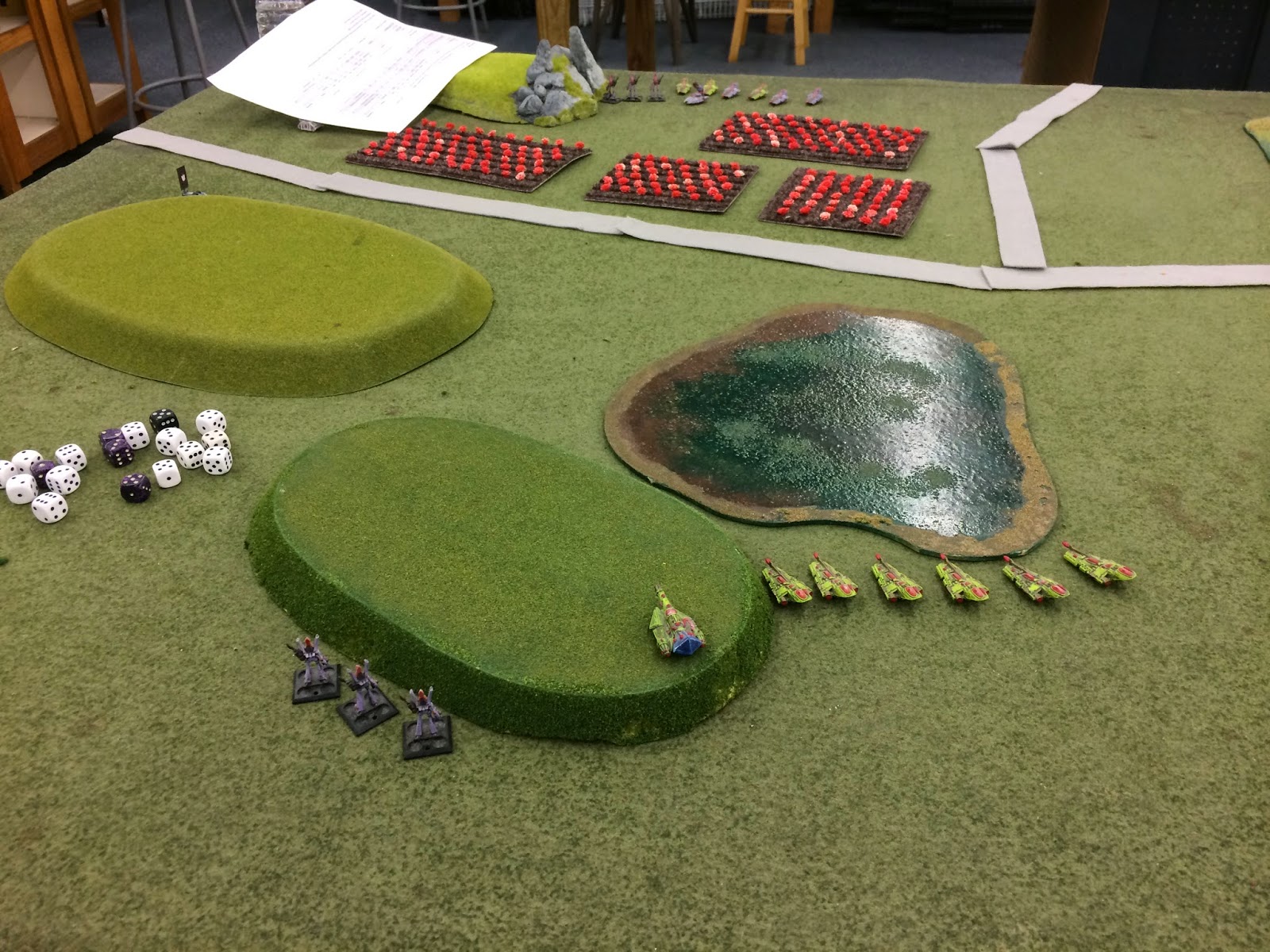 With no targets available, the Eldrich move into position to blast away at the Marines as they enter the battlefield. 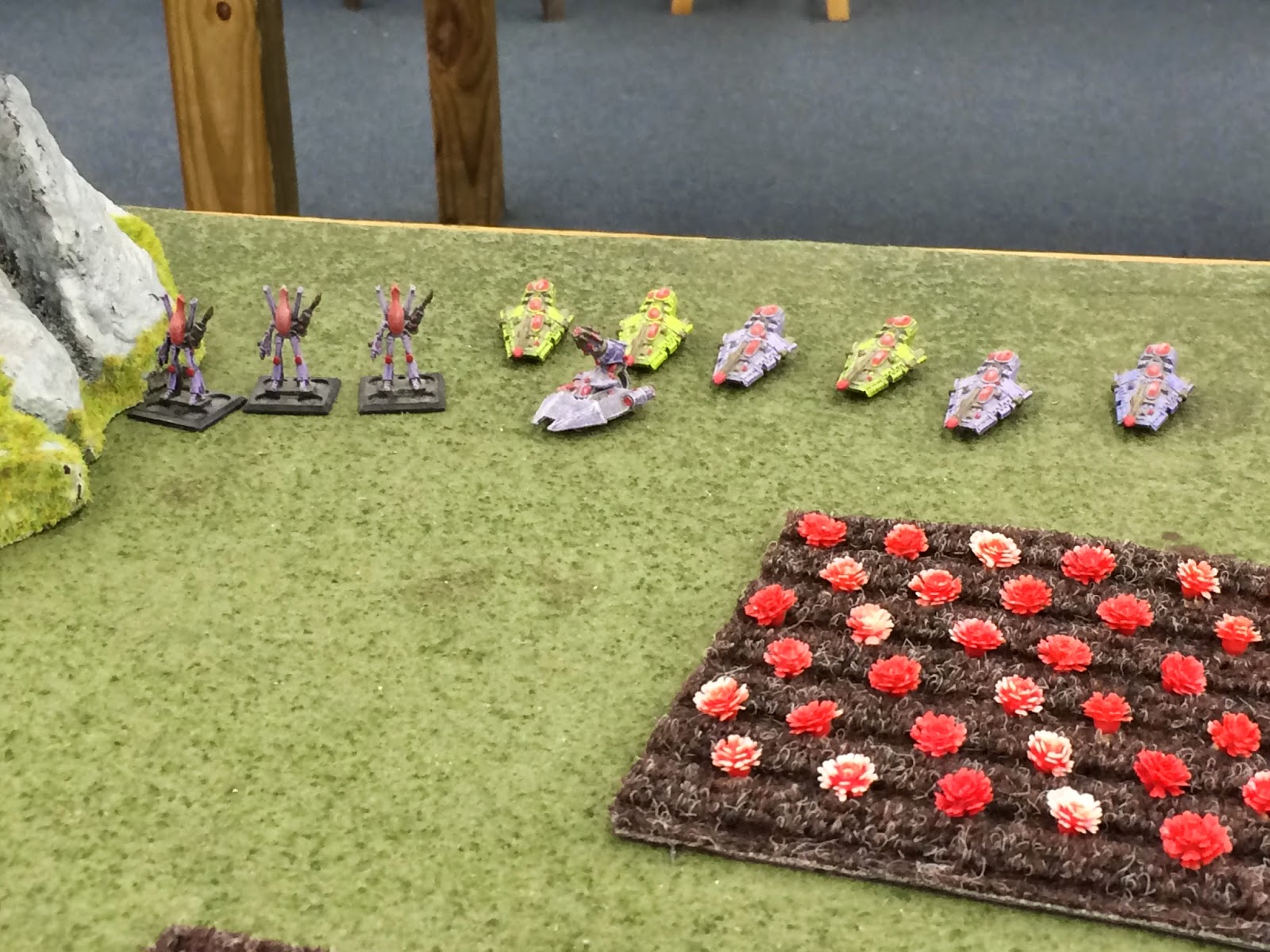 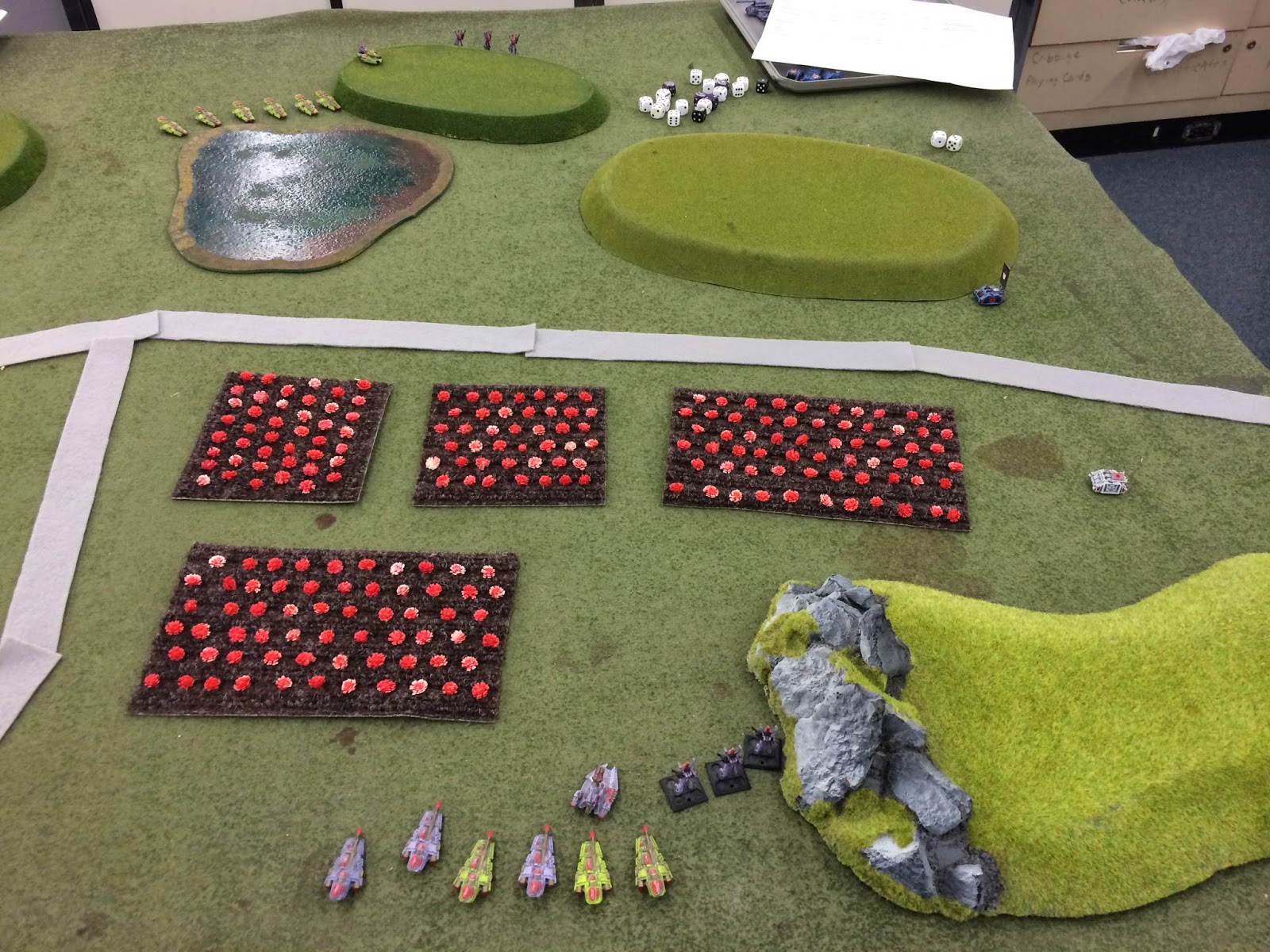 The Marines decided to divide up their forces and started with the Tank Destroyers.  They were able to destroy one Raptor with their ability to move and fire.  However, they then failed all further command rolls and were unable to bring any more forces onto the table this turn. 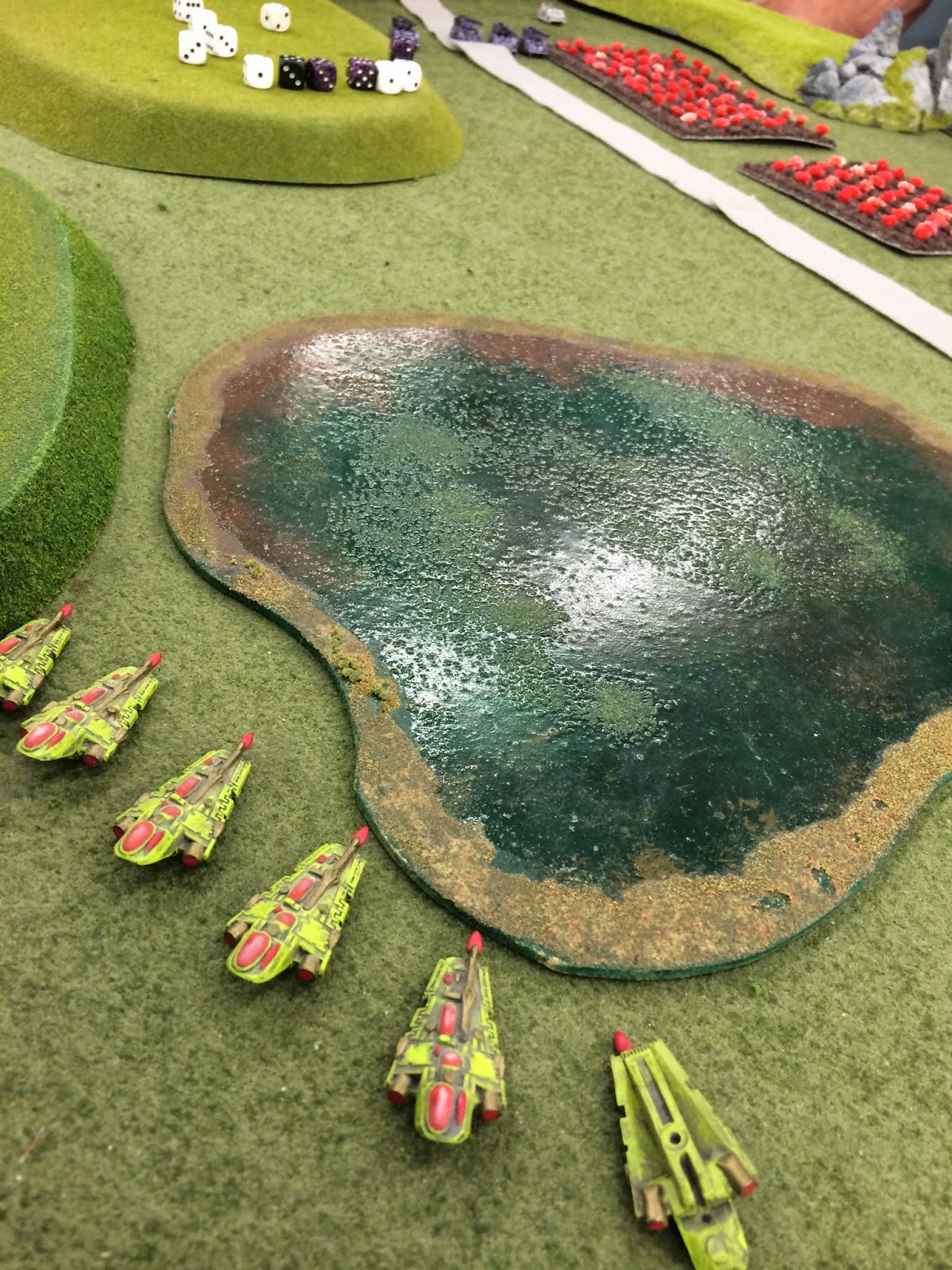 The Eldrich are ready to launch their assault on the enemy when communications fail (Command Blunder - with all units under command making a full move toward their table edge) and 6 of the Raptors flee off of the table and the walkers run to the table edge.  The breakpoint for the Eldrich is 9 and they have lost 7 units so far. 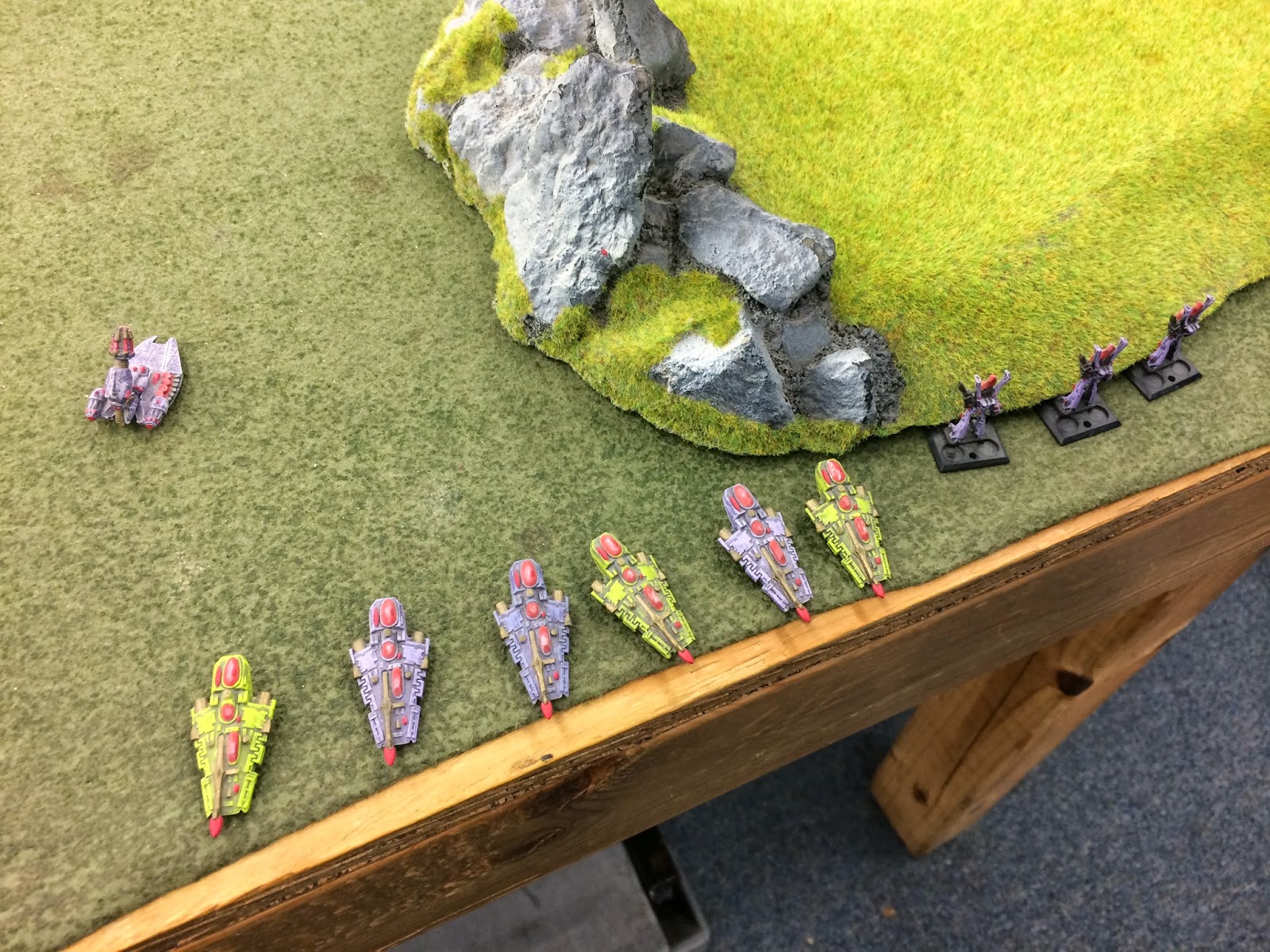 On the other flank, the CO orders the walkers and Raptors there into firing position and open up on the tank destroyers.  The Raptors are able to destroy one destroyer.  I probably would have suppressed a few more, but I forgot about that the suppression rule until it was too late. 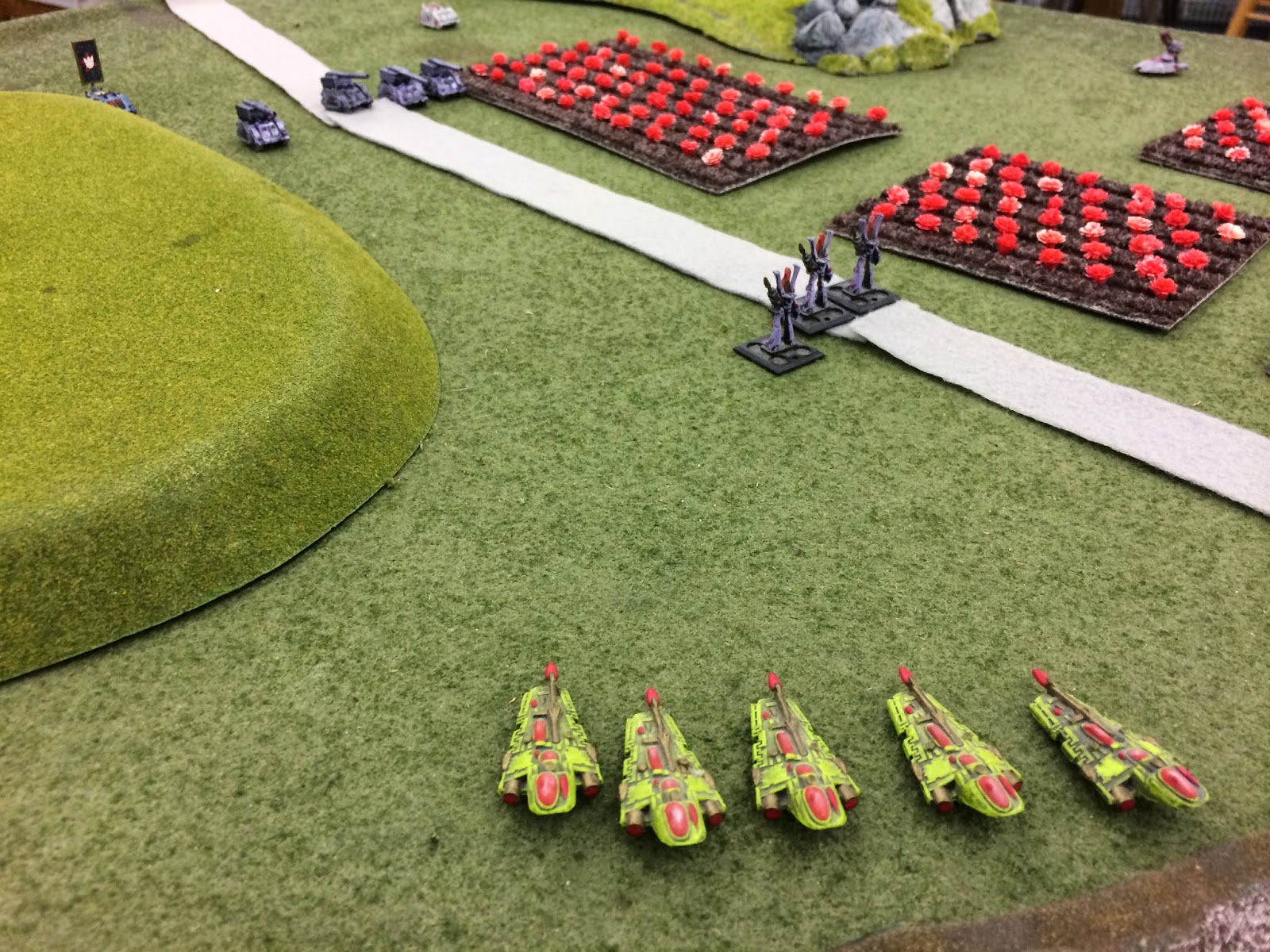 The Marines ordered on the Big Mama Assault Tanks and advanced the Tank Destroyers. All of these opened fire as part of their move and destroyed 2 walkers and another Raptor. 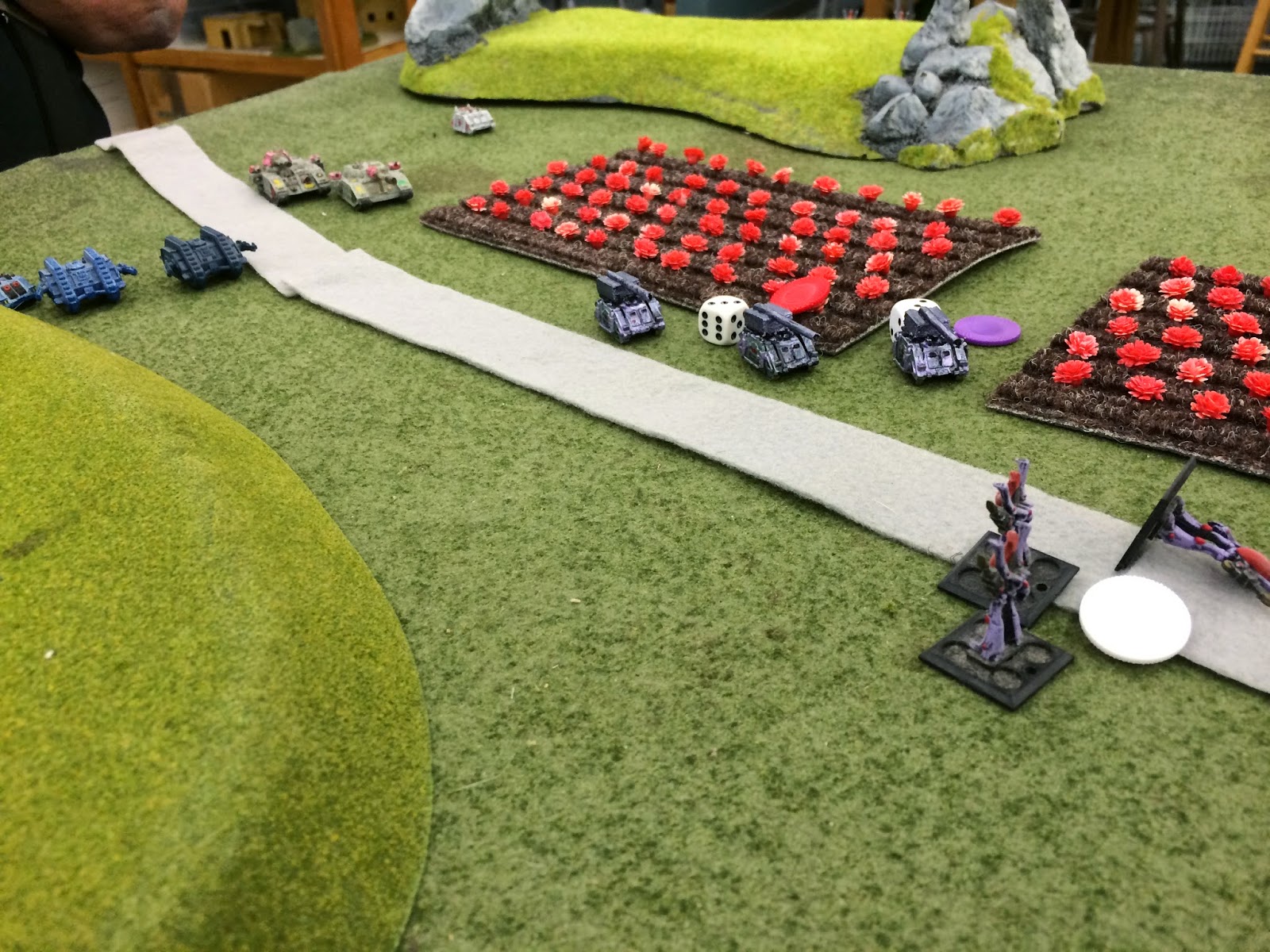 The Eldrich were now at their breakpoint and had to test in order to stay in the battle.  The dice were rolled and 11 pips came up.  Yikes!  We are doomed!!!!  Run!!!!!!!

Marines: 8 points  Eldrich:  0 points  (My army ran before the objective even got on the table.)

Okay it was a pretty quick game.  The Eldrich failed some key tests that ruined their day.  Next time I will do my best to get further from the table edge more quickly.

Randy has not read the rules so I was responsible for making sure things worked here.  It went well and things were starting to make sense as we moved forward.  If we would have had more than 3 turns, we might have gotten an even better grasp on the rules.  I can't blame the game for my poor roles though.  If I had used some infantry to boost the number of units then the breakpoint would have been higher and we might have had a little more fighting to do.

We both enjoyed this quite a bit.  I like that both sides have things to do on both player's turns via opportunity fire.  I need to re-read that bit of the rules to make sure I understand how it works.  I am looking forward to playing this again and hope I will have a better showing than I did here.

Have you played Future War Commander before?  What did you like/dislike about it?